Rory Sutherland explains why the World Championship is so unpredictable

The World Championship Road Race is two days away and the riders have entered the final phase of preparations together with their national teams. Tinkoff-Saxo’s Rory Sutherland represents Australia on Sunday in, what he calls, a completely different race:

“The World Championship has its own special nature and dynamics. Our teammates are suddenly our rivals and we find ourselves racing on a completely new team. It’s naturally a great honor to race together with our countrymen but that is what makes the World Championship so unpredictable. Which teams take responsibility, who does what? All the questions, which are more easily answered in a normal race, are suddenly unclear to everybody”, explains Rory Sutherland.

The World Championship is, according to the 32-year old Australian, similar to a one-day classic in many ways. Still, it’s impossible to compare them.

“Sunday’s race is quite similar to big monuments like Milan – San Remo but yet they’re incomparable. The World Championship is an open book with a new route and new favorites every year. And the winner will get to wear a jersey saying he’s the best for a whole year. But I won’t say that it’s more prestigious”, Sutherland adds.

The fight for the rainbow jersey starts in less then 48 hours giving the national teams a final chance to prepare. Yesterday, Rory went on the parcours together with his teammates to inspect the conditions and different sections.

“Today, I’m heading out with the entire team to give the legs a spin before resting. I’ll have the same role as on Tinkoff-Saxo, supporting the team captains such as Gerrans and Matthews. I think they’re able to fight for the win or a place on the podium on a route like this thanks to their strong finish. We have a team in good shape and it’s a big honor to be one of the biggest nations with 9 riders starting”.

“I’m in good shape as well. Actually, I feel stronger than most of the year and my preparations and races leading up to this Sunday have been increasingly successful. Tour of Britain went well and I finished 5th in GP Wallonie together with some big names. But the 255 kilometres we’ll ride on Sunday will be something different”, Rory Sutherland concludes. 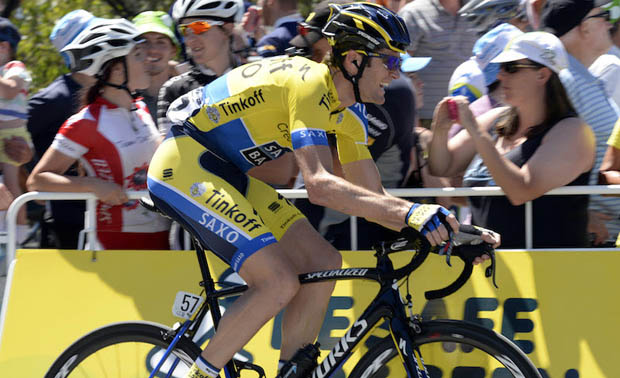 Frederik Willems will be sports director as of 2015