Rubiano debuts in San Luis: “Now I feel at home”

At the eve at Team Colombia season’s debut, and with thrill still around for the Giro d’Italia wildcard news, lots of enthusiasm and expectations surround the first appearance in a Team Colombia outfit of Miguel Angel Rubiano: the 29-year-old is now well-established in European cycling, but is now enjoying his first time as a professional in a Colombian team.

After spending his winter preparing in Colombia, Miguel is now set to wear the new kit at the start of the Tour de San Luis (January 20-26). The prestigious Argentinian race will once again boast a top-level starting list, and it is one Rubiano has a very good feeling for: in fact, he managed to bag a stage win in 2011, the climbers’ classification in 2012 and a 7th place overall in the last edition to date.

“It’s a race I like, particularly as the weather is very hot – my favourite conditions” – Rubiano explained. “It will be a frantic race since day one, when the wind might splinter the peloton, so teams will have to watch out, as losing a minute year can mess up many riders’ plans. The second stage will bring the first uphill finish: the final climb is not that tough, but there will be dropped riders, and I think a small group finish could be in the cards. I believe the tough top finish in Cerro El Amago will shape the GC, along with the time trial: it is one for specialists, and climbers will have to work hard to limit losses.”

In Argentina, Rubiano will be sided by five of his new teammates: Fabio Duarte, Leonardo Duque, Juan Esteban Arango, Edwin Avila and Juan Pablo Valencia, with Oscar Pellicioli calling the shots from the team car. “I am having an easy time blending into the team, as I have known the majority of my teammates since the youth ranks, and we met a number of times in the last few years as well. Work with the new technical staff is pretty smooth as well: I feel very much in tune with General Manager Claudio Corti, someone who really knows how to instil the right determination in his riders.”

“For a Colombian rider –Rubiano said – to compete with our Country’s name and colors on the jersey is really something. It’s a huge motivation, and it adds over to the great support we receive from our fans: in these months, I received a number of messages and talked to a lot of people, who told me how happy they are to see me finally riding in the team representing Colombia all over the world. And I am very happy too: there’s great mood into the team, and being all Colombians and knowing each other for so long really helps in communication and everyday routine. Now I really feel at home.”

The final reflection is obviously focused on the Giro d’Italia, a key fixture for the Escarabajos as well as for Rubiano himself: “We can’t express in words how important this wildcard is, for both us as a team and the whole Colombian cycling – I mean, it is huge. Our wish is to make a goot path up to the Giro and manage to score some valuable results at the Corsa Rosa: I have already won a stage in my career (in Porto Sant’Elpidio, 2012), but raising arms in a Team Colombia jersey would be a completely different story.” 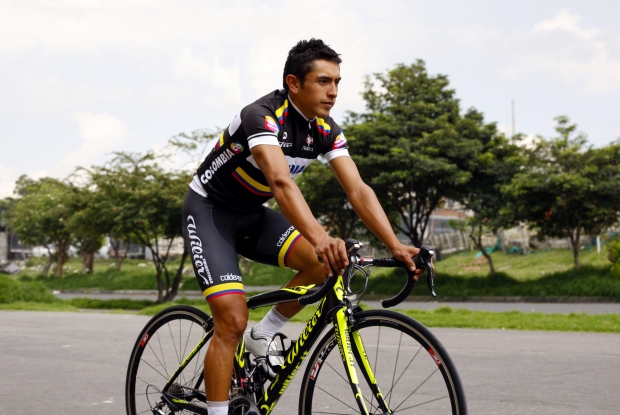