8. Which are your aims for this race?
I don’t have a lot of experience in this race. Normally, I ran the Tirreno-Adriatico in the past. But we decided to change in 2013. We thought that Paris-Nice can be better for my skills. And I started with a very nice performance in the first ITT. But I had a crash in the first stage and I was forced to stop.

So, I don’t have good memories. Anyhow, we will try to change it in 2014.
This is one of the first goals and It would be nice to check my shape in this important race.

9. What do you think about the course?
It is a curious profile. There are no individual time trials stages. And there are not big final climbing stages. So… it means that you have to pay attention on all the stages and all the kilometers of each stage.
Also, this kind of profile will be good for me thinking about to improve my condition and skills for the classics because it seems more a lot of one day profiles than the normal profiles of a one week tour. It will be a new and exciting experience!

10. Which could be the stage that suits you most?
I have no idea. Anyhow, I repeat: all the stages will be important in this Paris-Nice!

11. Indicate three riders for the final podium of the race
It’s necessary to list more than three. We will have Vincenzo Nibali, Tejay Van Garderen, Richie Porte, Carlos Betancur, Sylvain Chavanel, Tom Boonen, Simon Gerrans, Nacer Bouhanni, Lars Boom, Andy y Frank Schleck… They are all big champions. They will be dangerous in this Paris-Nice too!

12. How is your feeling with the French cycling fans? Have you a special memory about your races in France?
I love France. If you see my trajectory, I never run the Vuelta or the Giro.
I started running the Tour of France in 2009 and I quickly understood why this is the most beautiful race in the calendar.
Also, I have good memories. For example, I did a very nice performance in the Tour of L’Avenir. Later, I won the overall of the 4 Days of Dunkerque. It was a special victory because it was the first in professional category and against big names.
And, of course, I cannot forget the stages in the Tour of France.
All are special and the people are fantastic. I thank them all for the support they give me!

CONTINUATION OF THE SEASON

13 – In Paris-Nice there won’t be time trial and in Tour de France there will be only one. What do you think about the trend by ASO of reducing the time trials? Could it be better for you or not?
The individual time trials are good for the strongest rider. If you are in good shape, you can be close of the best times.
If you are not in good shape, you will probably lost a lot of time. In my case, I do good ITT when I was in good shape and when the ITT is not absolutely flat.
For example, I won the ITT of the Tour of Switzerland of 2013. But I am sure that I cannot win to Cancellara or Martin in flat terrain.
So, we can think that I prefer to have some ITT with hardest profiles.

14. Instead, there will be the cobblestone stage: what do you think about this? Have you ever raced on cobblestones? Will you make a training on it?
I had experience with cobbles. But not the same experience as Belgium or Dutch riders, of course. I ran races as Paris-Roubaix and Ronde Van Vlaanderen twice. My first season in professional category, for example, offered me the option to run some of the races with cobbles.

They are not my favourite races but I felt good. I arrived to the most famous track in the World: Roubaix. So, at least, I know what means to finish this big classic.

15. Is Tour de France the main goal of your season or there are other races you think could be so important for your 2014?
The Tour of France is important, but it is not the only goal in my season.
Our obligation is to honor the rainbow jersey in all the races of the season and specially in the best races for my skills: one week tours and some of the classics.

16. Which will be your races calendar after Paris-Nice?
I will run more or less the same calendar as 2013. I want to run Tour of Basque Country, Amstel Gold Race, Fleche Wallone and Liege-Bastogne-Liege, Tour of Romandie and Tour of Switzerland. 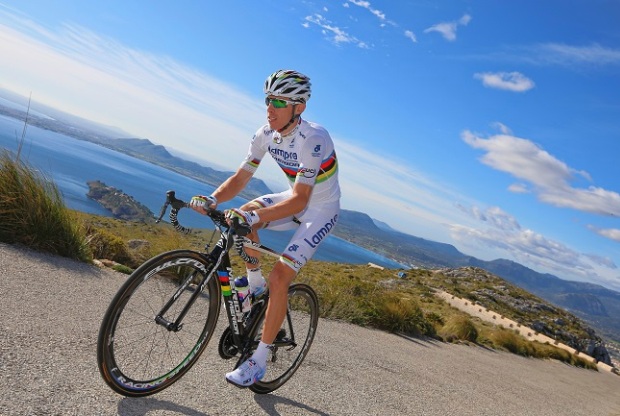