The very first day of the popular Italian Settimana Internazionale di Coppi e Bartali turned out arguably the most succeful one of this season for RusVelo men’s team. The second half of the 1st stage, a TTT for two parts of the squad composed of four men, each brought two top-10 spots. Ivan Balykin, Sergey Firsanov, Sergey Klimov and Artem Ovechkin posted the eighth time while Artur Ershov, Sergey Lagutin, Sergey Pomoshnikov and Kirill Pozdnyakov finished on the second step of the podium, each collecting 8 UCI points. A very tricky course with plenty of technical turns soaked with rain was done in 15.45 which stands for the average speed of more than 50,6 km/h. The only team that managed to ride faster was the strongest quartet of the Sky led by one of the best time trialists in the World Vasil Kiryienka; the bronze medalists of the World Championships finished 15 seconds ahead of the Russian team. Team Cannondale came up to the third step of the podium.

Renat Khamidulin, RusVelo general manager: “It was a breakthrough day for the team this season, but it was also a confirmation that the traditions of the Russian and post-Soviet cycling schools are very much alive in the event which has always been our strength, both on the track and on the road. We got passed by a very strong rival, but we also left behind serious contenders”.

Sergey Honchar, ITT World champion, RusVelo DS: “Good result, a real breakthrough. You can’t underestimate a long-term psychological effect it will surely have on our riders, especially the younger ones. For me it’s also very important that the two fractions are separated by just around ten seconds, it means that they are practically equal in terms of conditions, and the team doesn’t have weak links. Now it’s time to focus on the next stage, an ultimate test which will show who is who in the general classification”.

Artur Ershov, multiple World and European team pursuit podium placer: “ I came here for this, to do my best in my strongest event. And I hope I didn’t let my teammates down. The rainy weather was more of a blessing than of a curse for us, it plays in your hands if you are able to take calculated risks in the turns. We really got far ahead in comparison with the last year’s edition of the same race where we could not climb higher than 18th. Now we feel a great boost of confidence and motivation to get ready to the next big team time trial, the one in the Giro del Trentino”.

Sergey Pomoshnikov: “It was a ride on the edge, but we were reasonably sure we won’t fall. You can’t place high in conditions like that without taking necessary risks. Vittoria tires do their job very well even on slippery roads, they give you still more confidence. Artur Ershov played an excellent pilot fish for us in the narrow streets. It’s a shame one of us got dropped with half the distance to go, but we faced it, put in the corrections to the turns length and intensity and got by after all. There’s no guessing how much we would win back if we went in four till the end. To be on equal terms with teams that strong is a real boost of confidence”.

Sergey Lagutin: “The race was a pleasure to ride, I didn’t put in doubt Artur’s experience for a moment – I knew I could follow him and if he doesn’t slip here and there I won’t slip either. Tomorrow will tell it all, whether my training camp on Tenerife was productive enough for the GC.” 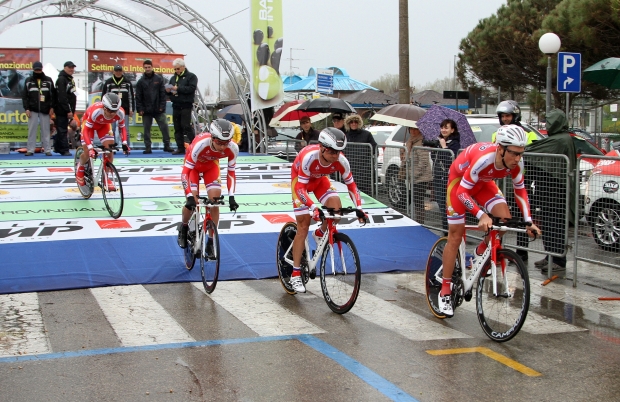