In today’s Garmin Velothon Berlin, Sam Bennett clinched his fourth podium finish for Team NetApp-Endura. After 175.2 kilometers, the 23-year-old Irish pro finished second only to Raymond Kreder (Garmin Sharp) of the Netherlands, who is just one year older. Alexander Porsev of Team Katusha came in third.

“The team implemented everything we planned to do heading into this race today and we were rewarded with an excellent finish. Of course it is frustrating when you don’t reach the top of the podium. We can still be satisfied, since second place is a great result when you didn’t make any mistakes,” Enrico Poitschke said after the Velothon Berlin.

As in past years, a lead group dominated the fourth edition of the Garmin Velothon Berlin for long stretches of the race. In cold and rainy conditions, a lead quartet was able to pull away just 13 kilometers into the race. Since only riders from smaller teams were in the escape group, the pursuit was extremely calculated, thus giving the escapees no realistic chance of getting through. The 128 riders in the pursuit also benefited from the fact that both the top group’s lead and actual size continued to shrink. As a result, the race ended with a sprint royal on the Strasse des 17. Juni for the fourth year in a row. 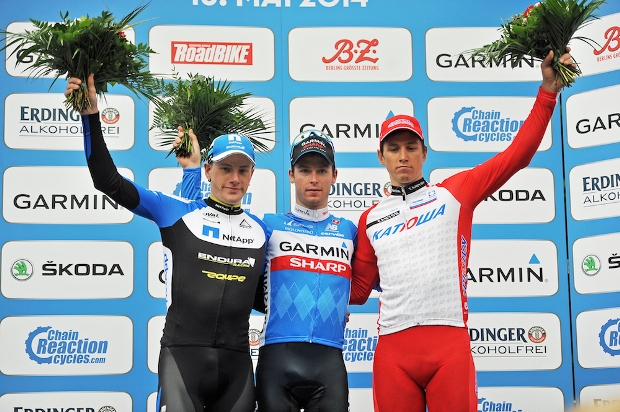