Schwinn’s Iconic Sting-Ray is Back!

Commemorating the 50th Anniversary of the bike that changed it all, the limited edition “Fritz Fifty” is available this holiday season

Fifty years ago, then Schwinn Vice President for Engineering, Research and Development, Al Fritz created the bike every kid eventually wanted: the Schwinn Sting-Ray. To commemorate the 50th anniversary of the bike, Schwinn, a brand of Dorel Industries (TSX: DII.B, DII.A), has created a limited edition of the legendary Schwinn Sting-Ray, the all-chrome Fritz Fifty.

The original Sting-Ray was in production from 1963-1981 and the most famous models were the Krates, produced from 1968-1973. Schwinn was honored to work with Al earlier this year before his passing in May 2013 to create the first newly designed Krate Sting-Ray since 1973. The Fritz Fifty is one last special model designed by Al of the bike loved and purchased by millions.

There will only be 500 of these collectible masterpieces available for purchase exclusively at independent bicycle retailers in the U.S. during the first week of December. For the first time in history, the Sting-Ray will have a chrome frame, a feature that was always a dream of Al’s. The possibilities to customize the Fritz Fifty with different colored parts and pop wheelies while making a unique fashion statement are endless.

The new Fritz Fifty Sting-Ray boasts all of the authentic details that made the original famous: classic frame, banana seat with rear suspension, custom springer fork, fat silk rear tire, smaller 16” front tire, and fenders for riding in all weather. Each bike is individually numbered and has a limited edition seal of authenticity signed by Al Fritz. A portion of the proceeds from the bike sales will be donated to the Alzheimer’s Association in honor of Al Fritz. 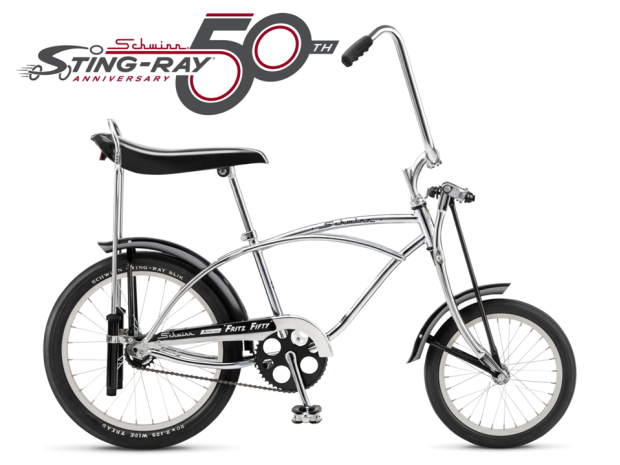 “The creation of the Fritz Fifty Limited Edition Schwinn Sting-Ray is a testament to the incredible contributions of bicycle design by Al Fritz and Schwinn’s commitment to the heritage of our brand,” said Jeff Rogers, Global General Manager at Schwinn. “The Schwinn Sting-Ray was the bike that every kid wanted when they were growing up, and we’re thrilled to bring it back, and in a sharp new style, for people of all generations to enjoy.”
For more information on the Schwinn Sting-Ray, please visit www.Schwinnbikes.com or www.facebook.com/rideschwinnbikes.

ABOUT THE STING-RAY
• In 1962, Schwinn designer Al Fritz learned of a new California youth trend: retrofitting bicycles with the accoutrements of motorcycles (high-rise, ape hanger handlebars and banana seats).
• As a result, in 1963 a wheelie bike was introduced to the public as the Schwinn Sting-Ray.
• By the end of 1964, Schwinn Sting-Rays accounted for 70 percent of bike sales in the U.S.
• The Schwinn Sting-Ray remained in production until 1981, with nostalgic reissues of the original Krates in 1998, 2004, 2008, and 2011.
• On May 7, 2013 Al Fritz passed away, but not before helping to recreate the magic of the iconic Schwinn Sting-Ray by developing this 50th anniversary commemorative, chrome Fritz Fifty in tandem with the Schwinn Bikes team.

ABOUT SCHWINN
Founded in 1895, Schwinn is an American icon, building some of the best-known and best-loved bicycles of all time. With a continued dedication to quality, forever synonymous with the Schwinn name, America’s most famous bicycle brand looks forward to providing another century of innovation and performance to people of all ages. Information about Schwinn bicycles is available at www.SchwinnBikes.com. Be sure to follow Schwinn on Twitter at @RideSchwinn and like Schwinn on Facebook at Ride Schwinn.