Sun Valley, ID, May 22nd, 2013 — SCOTT Sports announced today they are the new sponsor of the Deep Summer Photo Challenge at Whistler Crankworx. The event is in it’s sixth year and points six different lenses on some of the best mountain bike action in the world. This year’s show promises more variety and a broader perspective with expanded boundaries to shoot within and a required Whistler Mountain Bike Park element. The slideshows created by this all-star cast of photographers will be presented under the stars on August 14th at Whistler Olympic Plaza. The confirmed photographers for 2013 are Scott Markewitz, Harookz, Garrett Grove, Bruno Long and Nicolas Teichrob. There is still a wildcard search under way that will be awarded via Pinkbike.com contest, that slot will be announced June 17th. 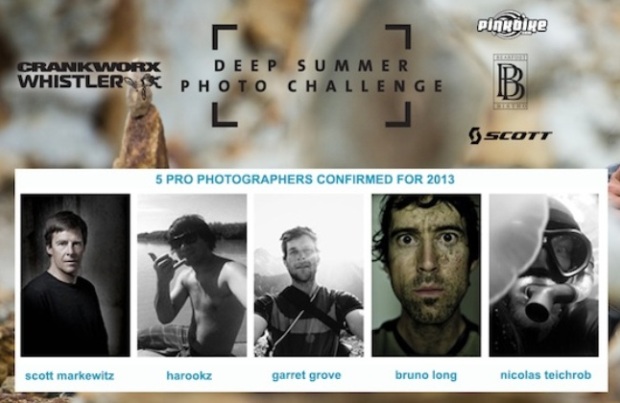 “We adore good photography at SCOTT” said Adrian Montgomery. “We strive to create top-notch visuals for our own campaigns and I always pay attention to the up and coming photographers that shoot cycling. We find inspiration in slideshows like Deep Summer creates and I’m very pleased to be partnered with Crankworx on this event. We aim to broaden the Deep Summer Photo Challenge beyond the chosen six and award prizes to the spectators at Crankworx who take great photo’s too. We’ll be rolling out a social media promotion that encourages spectators to tag photo’s and mention @bikeonscott via Twitter and Instagram and award prizes for the most liked images on these platforms.”

For more information on this story, contact Adrian Montgomery at 208.622.1036 or email him at [email protected]