Wouter Wippert has avoided a crash in the finale of the opening stage of the Tour de Taiwan to finish in second place in the 52km criterium in Taipei City.

The result marks the Dutch recruit’s fourth podium of the season, with a win and two runner-up placings at the New Zealand Cycle Classic in January.

“Wouter was disappointed to finish second today as he knew he was good enough to win, but happy to stay upright,” explained Directeur Sportif Henk Vogels. “I am very happy with the performance and it certainly is a good sign of things to come.”

The peloton negotiated five laps of a 10.4km circuit in the Taiwanese capital in wet conditions on Sunday, with UnitedHealthcare’s Luke Keough finishing first across the line, followed by Wippert and then Georgios Bouglas (SP Tablewear).

A two-man breakaway dominated the race, only coming back to the fold for the final lap, with Drapac content to wait it out until the finale to make a move. The greasy roads, with rain falling in Taipei over much of the past 24 hours, made for a “chaotic” finish, according to Wippert.

“The finale was definitely chaotic so it made for hard racing,” the 23-year-old explained. “Wes [Sulzberger] did a great job, he moved me into eighth wheel with three corners to go and soon after that there was a crash.

“I had to hit the brakes and that allowed Keough to position himself on the inside corner,” Wippert continued. “I was able to make some slight gains in the last 100 metres but Keough was still two metres head of me at the finish line.”

Wippert will now wear the polka dot jersey heading into Monday’s second stage, 152km’s that is dominated by the Cat.1 climb at the halfway point in Taoyuan County. With Drapac two-time defending champions with Rhys Pollock and Bernard Sulzberger (2012, 2013 respectively), Wippert said that the team was motivated for a high placing tomorrow.

“Every single one of the guys here is in good condition and so we will attack the stage as a team – we’re definitely strong enough,” he said.

Wippert is the best-placed Drapac rider in fourth place on General Classification, four seconds in arrears of the stage winner Keough, with Apostolos Bouglas (SP Tablewear) and Rémy Di Gregorio (Team La Pomme Marseille 13) in between thanks to time bonuses earned from intermediate sprints. 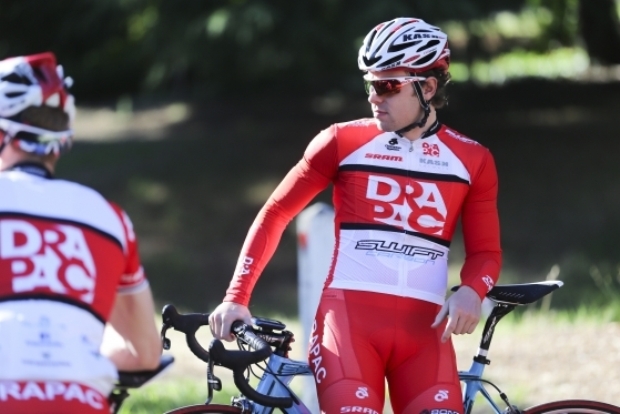