Team MTN-Qhubeka p/b Samsung conquered the first mountain stage of the Volta a Portugal on Sunday when Sergio Pardilla earned his first victory for the team. With two kilometres to go, the Spaniard attacked what was left of the lead group to cross the line solo in Mondim de Basto. Africa’s first Professional Continental team came into the race stating its objectives of a stage victory and a high placing in the general classification. Pardilla’s ride was a big step in achieving this as he also moved into the race leader’s yellow jersey.

“I am very happy,” Pardilla said after the victory. “I am feeling very strong and I am happy we could have a good race today. The team was fantastic this whole week so far. After Tour of Austria I had a week of recovery before focusing on Volta a Portugal. I went to altitude training for a few weeks to prepare for the race and my feelings were immediately very good so I was hoping for a good race here. I am happy we could get this result and I am focused on finishing it off strongly for the team.”

The team was in the thick of the action all day as Jay Thomson made the day’s escape for the second time during the race. Halfway through the stage he got caught by the peloton and Team MTN-Qhubeka p/b Samsung turned its focus to making sure the rest of the escape didn’t make it to the end.

“The plan was 100% for Sergio,” sports director, Jens Zemke revealed. “We wanted to protect him and make sure he didn’t lose any energy he didn’t have to. The whole team rode really well and it paid off in the end. Close to the end of the stage Ignas [Konovalovs] was chasing down the leading group and Sergio had great legs in the end to attack.”

Winning the stage and moving into the race lead in Portugal was not the only success of the day for African cycling as Team Principal, Douglas Ryder reveals.

“What a day in the development of African cycling with the whole team working for Sergio on the mountain top finish in Volta a Portugal. We had Dennis van Niekerk, Ferekalsi Debesay and Ignatas Konovalovas there until near the end doing all they could and Sergio finishing it off with an incredibly well timed attack with two kilometres to go and taking the stage and the yellow jersey. It is a great victory for the team and for Sergio but our fantastic day does not end there as our World Cycling Centre Africa feeder team also won in South Africa in the Clover Lowveld Tour where Bonaventure Uwizeyimana from Rwanda won the final stage. Not to be outdone, Costa Seibib from Namibia also won the GP Zurich in Switzerland. The incredible support from our sponsors over the years and hard work from the staff and riders is paying off across multiple levels, Africa is going to be a part of cycling’s future,” he concluded.

Team MTN-Qhubeka p/b Samsung is in its debut season as a Professional Continental team. Today’s success marks the team’s twelfth victory of the year. 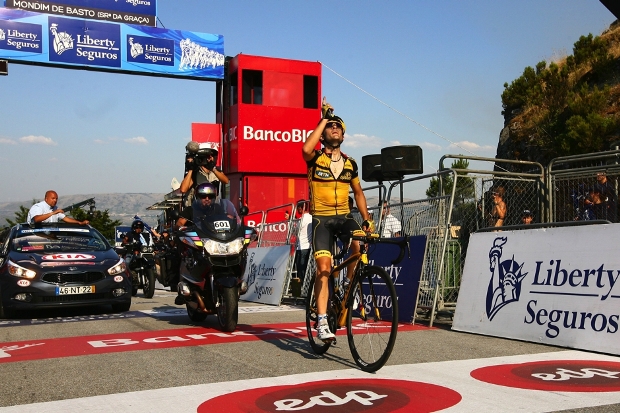