“Stage” in Maser for the winner of Il Lombardia.

It was a day to celebrate in the Sidi Sport house when Esteban Chaves paid us a visit. The Colombian rider has had a long, busy season that was however full of gratification. Highlights definitely include two podiums in major stage races, one in the Giro d’Italia (2nd) and the other in the Vuelta Espana (3rd), as well as his latest victories at the Giro dell’Emilia and the Lombardia; the final stage of his season was a stop here at Sidi headquarters in Maser (Treviso). 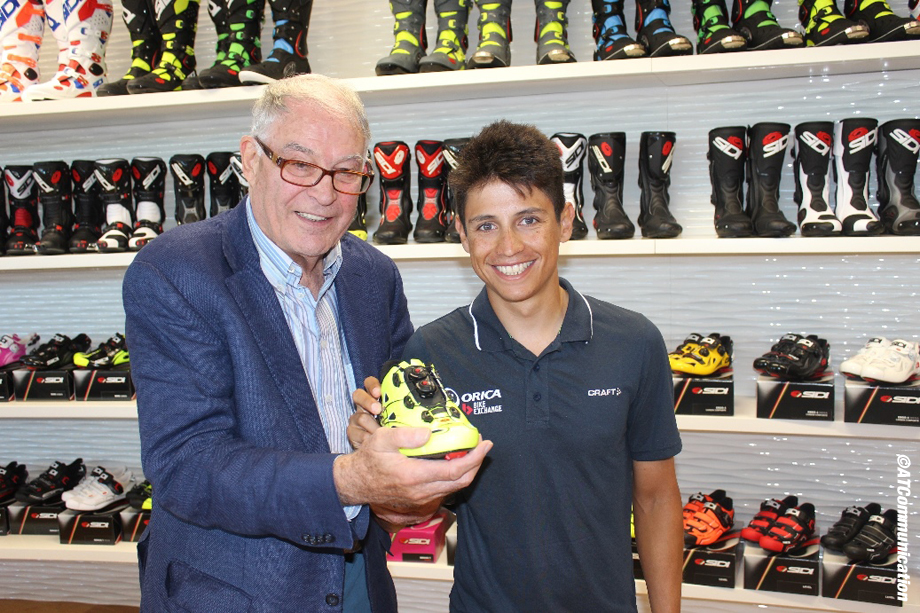 Chaves had already passed through these parts on May 18th, during the 11th stage of the Giro, the one from Modena to Asolo; but that was a pummelling day, things were serious, everyone was focused on the maglia rosa, and there was certainly no time for a courtesy visit. Today on the other hand the atmosphere was carefree and relaxed, like the last day of school. Now Chaves has time to look back on his achievements and contemplate his goals for the future, chatting face to face about cycling stories present and past with Dino Signori, who founded Sidi in 1960 and still leads the company with the same passion and determination as he did back then. 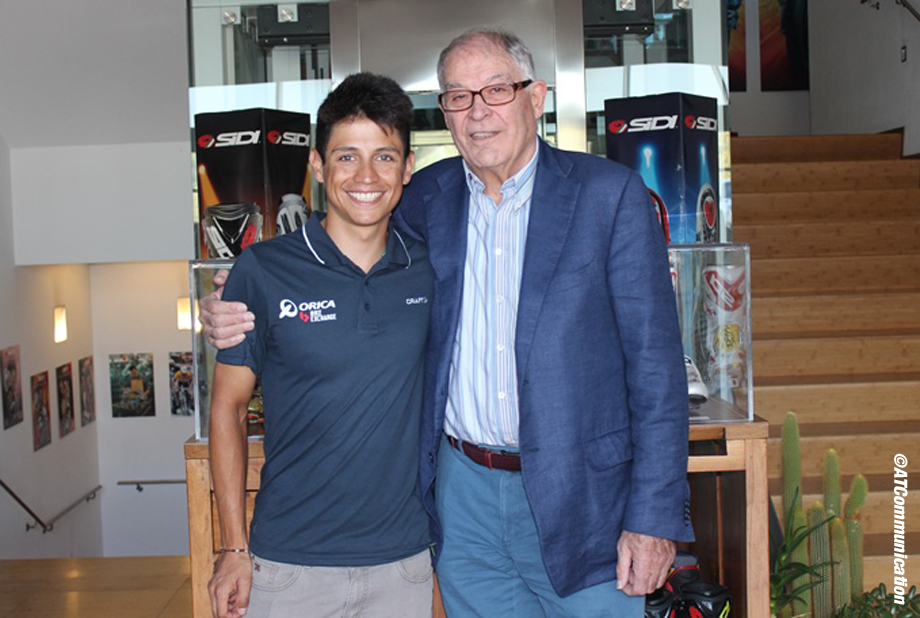 Although there are quite a few spring times between Dino Signori, who will soon turn 81 on October 7th, and Esteban Chaves, born in 1990, the two men seemed to hit it off immediately. “To go fast and win you need to know yourself well …” said Dino Signori. “I agree. In fact, when the race starts getting serious, I follow my feelings and I especially listen to what my body tells me , without focusing too much on the data on my cardio-frequency computer,” responded Chaves. “Exactly, technology is important and it helps, but it isn’t everything; to give it your all you have to achieve the proper balance between feelings and technology. This applies to sports performance, just as it does in the company when we develop a product,” answered Dino Signori. 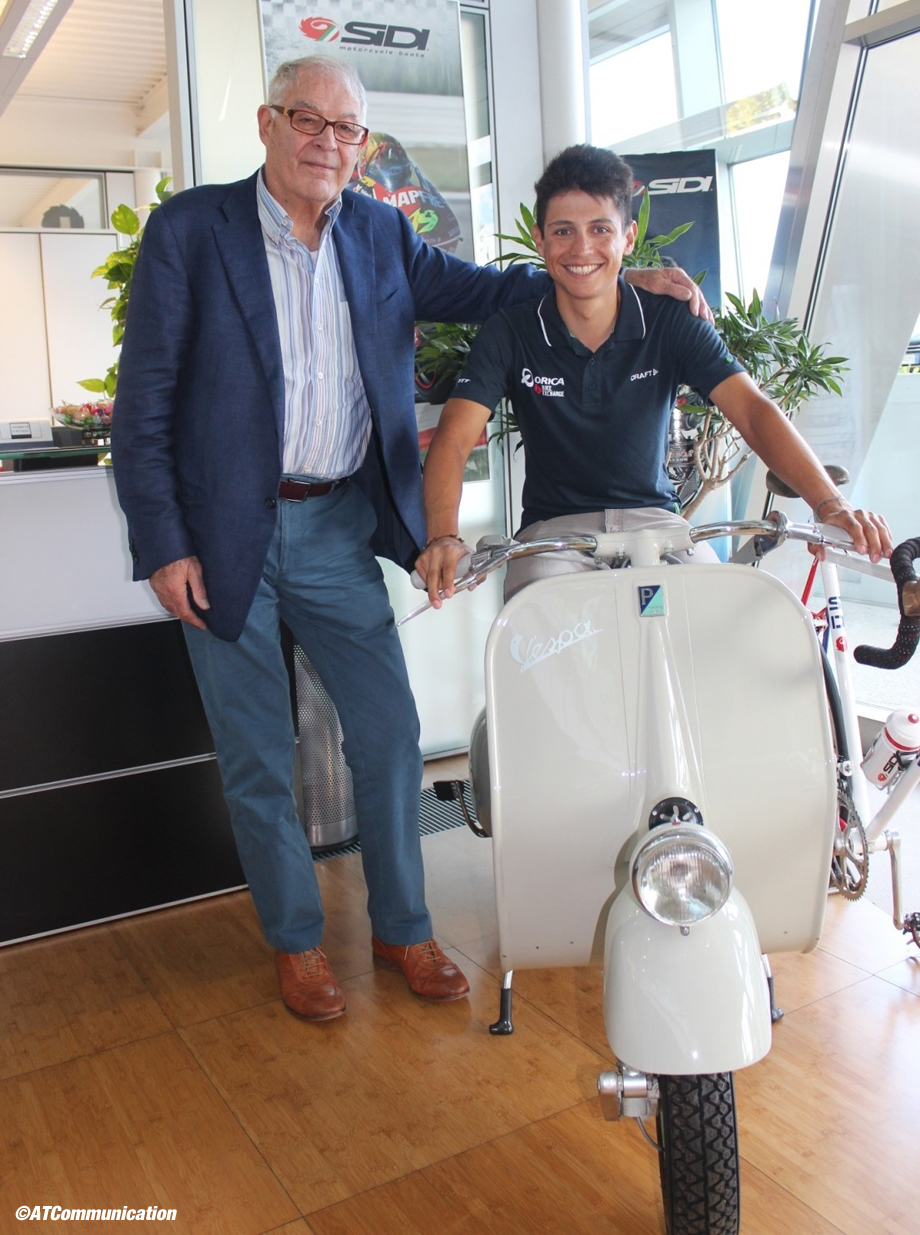 Esteban Chaves confirmed the nice things we saw in him during this season; cycling has found a rider endowed with great talent, exquisite humility, good manners and fantastic affableness. These are rare qualities, especially when you put them all together.

Talent is what he has demonstrated year after year in a step by step process of maturation: his debut among the pros in the court of Claudio Corti. His maturity and first victories until he made it to the big leagues in world cycling wearing the Orica-BikeExchange jersey, with which he achieved his best, most important accomplishments this year, and with which we will see him in action in 2017 as well. Orica-BikeExchange has shown great faith in him. “After the accident I had in 2013, at the Laigueglia, there was the risk that I might not have been able to race again. It took me an entire year to recover, but the team always wanted me; they waited and had faith in me,” explained Chaves. 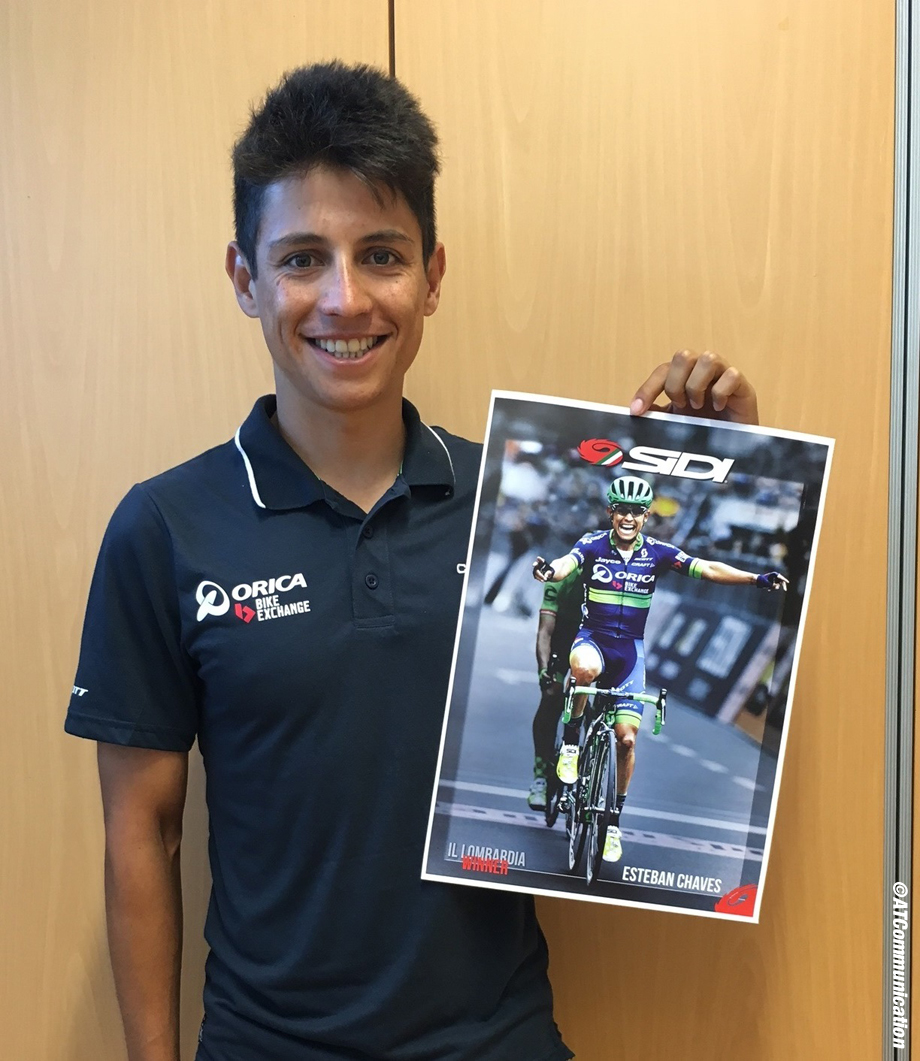 He was taught his good manners by his dad Jairo and mom Carolina, who we saw in that unforgettable scene hugging Vincenzo Nibali at the finish line in Sant’Anna during the Giro. His humility is that of a man who, although he’s made cycling history by becoming the first non-European to score success in the Lombardia and the first Colombian to win a Monumental Classic (the other four being the Milano-Sanremo, the Tour of Flanders, the Paris-Roubaix and the Liegi-Bastogne-Liegi), remains with his feet firmly planted on the ground, well aware that he still has a long way to go…or rather to pedal. “This year I wore the maglia rosa and won the major Dolomite stage in the Giro. It was an incredible emotion. I want to go back to the Giro to try and win it. But my childhood dream has always been to win the Tour. And after the victory in the Lombardia, another classic that really appeals to me is the Liege-Bastogne-Liege,” explained Chaves. 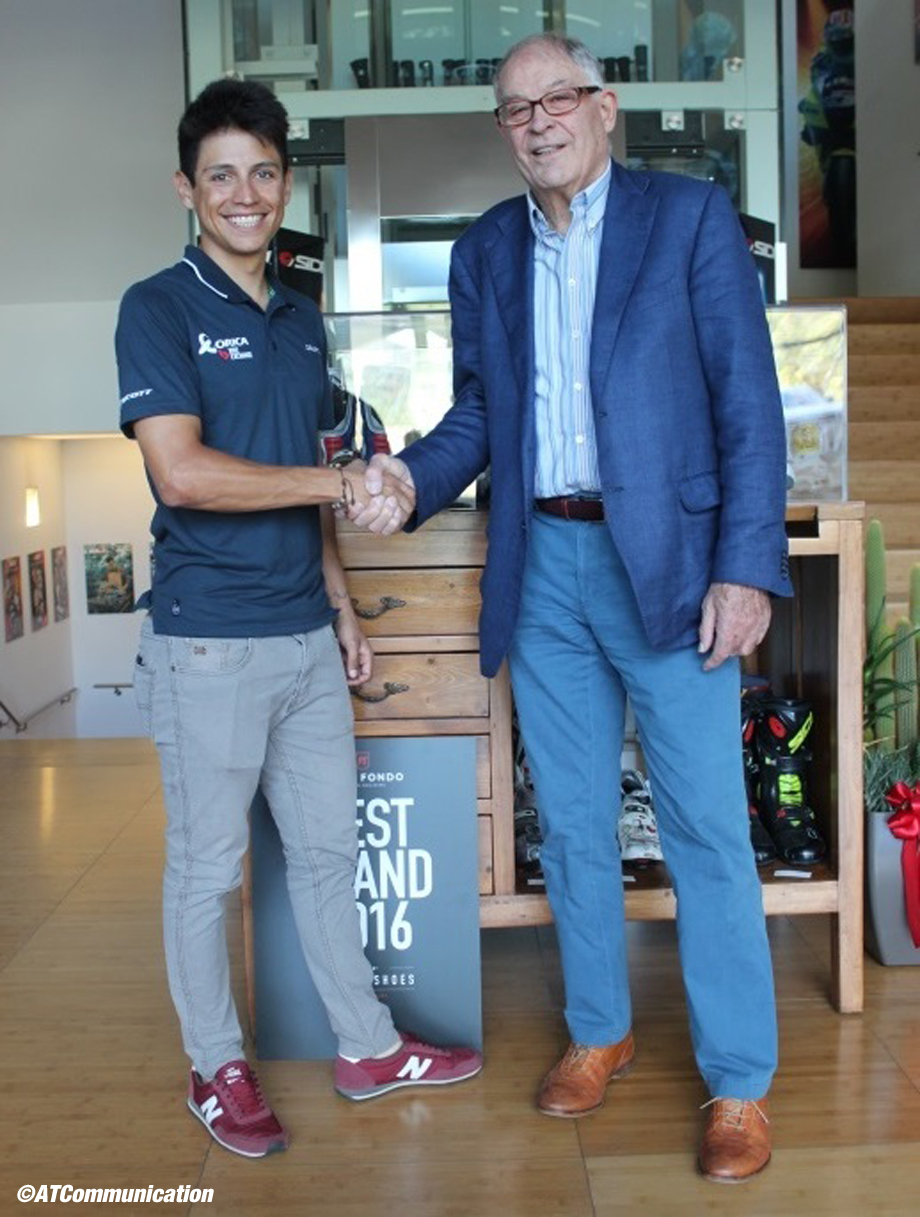 All of this is peppered by the abundant and contagious affability of a guy who’s always smiling, who comes from a poor country which is however rich in passion and a desire to emerge in sports, to emerge in life as well. “Sports, particularly football and cycling, are very popular in our country. For children sports represent possibility. I try to do what I can. My dad imparted his love of the bicycle to me. For three years he and I have been carrying on the Fundacion Esteban Chaves project in Bogota. Right now we have 18 kids, between rookies and juniors, but we want to grow even more,” says Chaves.

In the end his visit to the general headquarters in Maser was the perfect occasion to present Esteban Chaves with his new Shot shoes, the latest models in the Sidi road racing collection, which the Colombian will use when he takes on next season. “I used Sidi shoes for the first time when I was 15 years old; they were an old pair of my father’s. Sidi has always been with me throughout my career, besides a brief parenthesis when the team I rode for was tied to another sponsor. I’ve always seen great champions win with these shoes on their feet; now I’m one of them and it’s a tremendous satisfaction. Even more so now that I’ve come to know the history, the commitment and passion that lie behind this brand and the people who represent it,” concludes Chaves. 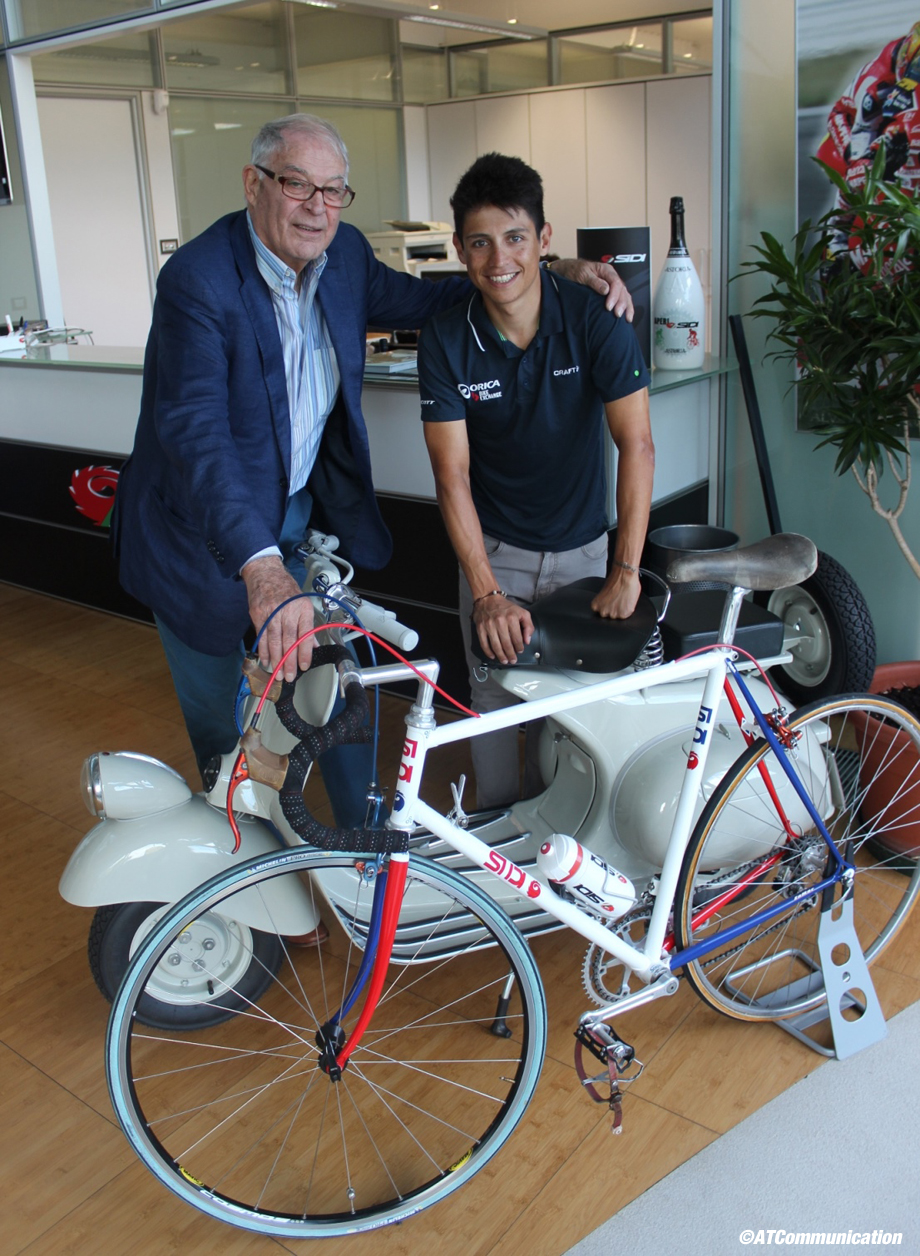