Making it two wins in two days for Katusha Team, Simon Špilak attacked from his breakaway on the Côte de Laffrey and tucked into his time trial position to race 20 kilometers solo into La Mure and claim victory on stage 5. After yesterday’s inspiring win by Iurii Trofimov, Špilak (27) saw a chance of his own to earn his second win of the season, the previous victory coming in the Tour de Romandie last April for the Slovenian rider.

– It was a very hard day, both because of the profile and the hot weather. I really don’t like heat, so it was not easy for me today. When I attacked on the climb, I did not think I could win. There were a lot of attacks and Egor and I just followed them. And in a moment I decided to make a move by myself. Everything went good for me. I pushed hard and I only realized at the final kilometer that I would win. I am very happy! This is nice victory for me. Katusha has spent a perfect week here in Dauphiné – yesterday Iurii won and today I took a victory. It’s great to get these big wins in such a hard and hot race! – Simon Špilak.

– Today’s stage was well-suited for the break which is why we were motivated again to try for ourselves. There were a lot of attacks before the break went away with both Špilak and Ego Silin. Both riders were strong and felt good. But because of strong attacks behind the breakaway in the peloton, the break’s advantage began to come down. It was in this situation that Simon found a moment to attack, while Egor protected him in the chasing group. It was the perfect moment because shortly afterwards the breakaway was caught by the peloton. With only a few km to go we saw that Simon had a good gap so I asked him to minimize his risks on the descents and corners. This is a second win for Team Katusha and of course we are all very happy. In addition today is a great celebration – the Day of Russia! I would like to congratulate all of our fans on behalf of Team Katusha on this day of celebration. I think we can consider these two victories as a present! – said team director Dmitry Konyshev.

At 189,5km the rolling stage began in Sisteron and ended in La Mure after six rated climbs on the course. It took awhile to form, but a break finally managed to slip away on the first climb of the Col de Manse and Špilak put himself in a good position with 16 other riders, including Katusha teammate Egor Silin. The breakaway held steady at 3 minutes with Sky controlling the time gap for leader Christopher Froome.

Alberto Contador (second place on GC) attacked on the Col de la Morte in an effort to unseat Froome from the yellow jersey and the Spaniard gained more than one-minute on the GC group. Contador bridged across to Špilak’s group as Simon lead the way over the top of the climb, but Sky eventually brought Contador back into the main field. Špilak continued his solo move while other racing action played out behind him, most notably an attack from third place Wilco Kelderman (Belkin) and Adam Yates of Orica-GreenEdge. The young chasers stayed ahead of the yellow jersey group, claiming second and third places on the stage and soaking up the remaining time bonuses. Kelderman remains in third on GC, but now holds the same time as Contador at 12-seconds behind leader Froome. 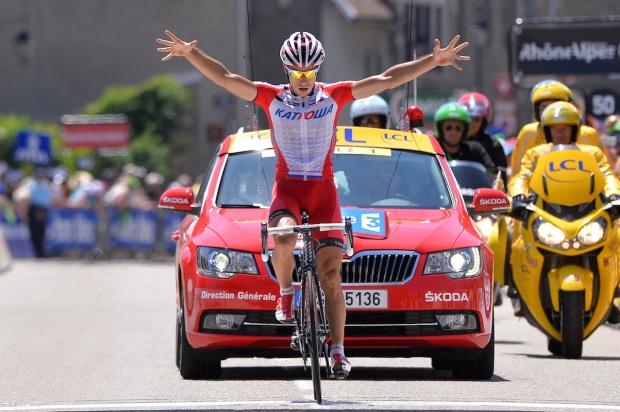