Something New On Screen

Tour de France viewers will be able to see even more of the race from inside the peloton thanks to a tracking system and live broadcast from onboard cameras. New channels to show the race in Albania and Vietnam.

Key points:
– A bettered tracking system to know the riders’ position and speed
– Live images from onboard cameras
– A wider coverage in several countries: Sweden, Colombia…

Riders tracked all the way
Developed and tested in recent years, the tracking system now enables to localize the riders, to know their speed and the gradient of the road. Data flows will be processed by Tour de France technical partner Dimension Data and made available to enhance TV commentaries. It’s a little revolution in the broadcast of bike racing.

Onboard cameras: scaling new heights
Onboard cameras were implemented two years ago, giving some insights to the cycling fans. Video clips from the 2015 Tour de France have been downloaded almost three million times. Every day, fourteen bikes will be equipped with a camera. Pictures will be published online and on social networks. Three bikes will be chosen daily to carry onboard live cameras connected via satellite and plane relay. Images and sound will be available and will be inserted at any time during the live telecast.

80 hours of live TV coverage, 6 stages live from start to finish
The 2016 Tour de France will have 80 hours of live broadcast, keeping 500 people busy working on the production. Images from the race will be filmed by cameras placed on five motorbikes and two helicopters. 90 speakers will commentate the race on site, notably for six stages broadcasted in their entirety this year. Despite the concomitance with the Euro and many staffs to attend the Olympic Games later on, the number of accredited TV crew members remains stable.

More channels to show the Tour in Sweden and Colombia
The Tour de France is seen worldwide and has been so for many years, in 190 countries from all five continents throughout 100 broadcasters, 60 of them showing it live. Exposure grows again this year. In Sweden, national leading channel TV4 will have a live coverage for the first time. Colombia’s most important channel Caracol will offer a more detailed coverage of Nairo Quintana’s #SueñoAmarillo. RTSH in Albania and K+ in Vietnam are newcomers on the list of the Tour de France broadcasters.

More information about the Tour de France 2016 on www.letour.fr 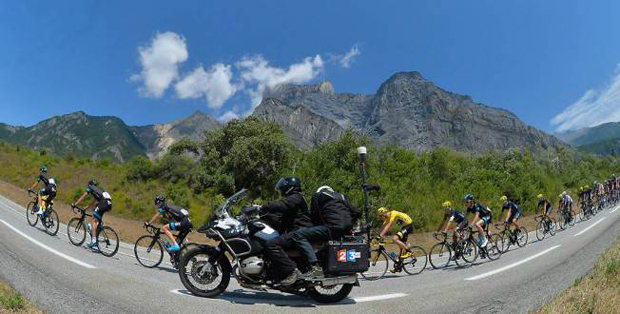