The South African National Championships will take place from 10th – 14th February in the KwaZulu-Natal Province. The elite time trial happens on Thursday 11th and the elite/u23 road race will be the final event on Sunday the 14th.

Team Dimension Data for Qhubeka will be out to defend the national road race champions jersey that it has held for the last 3 years in succession and hopefully, also win the time trial title that Daryl Impey (Orica-GreenEdge) has held onto since 2013. It is always a special occasion when we get the opportunity to race at ‘home’ and our African Team takes great pride in racing for the national jersey.

Thursday’s 48km time trial will take place in Wartburg and the road race on Sunday will be run over a 170km route in Westville, much of the same parcours as in 2014 when the National Championships were first held here. The time trial route is undulating and certainly suits the capabilities of Impey to a ‘T’, making him the favourite for the title once again. Our African Team will put up a stern fight in the race against the clock though as Johann van Zyl, Nicholas Dougall, Jaco Venter & Reinardt Janse van Rensburg are set to start. Johann and Nic have been developing their time trialling abilities over the past few seasons in Europe and are relishing the chance to start their first national championships for quite some time.

The road race will again be run over the course that saw Louis Meintjes (Lampre-Merida) dramatically beat Impey in the 2014 race. Both these riders will pose the biggest threat to our team on Sunday. The long uphill drag on the M13 will certainly start to take its toll as riders will have to complete the 17km circuit a total of 10 times. It will be less of a specialist for the course that is favourite to win and more a race where the strongest rider on the day should prevail. Dimension Data for Qhubeka will have 6 riders on the start line with our TT participants Johann, Nicholas, Reinardt and Jaco also being joined by Songezo Jim and our defending champion, Jacques Janse van Rensburg.

The National Championships will have further significance for our African Team as it will be the debut event for our continental team. Our upcoming talents will be 5 riders strong at the championships, Jayde Julius, Keagan Girdlestone, Ryan Gibbons, Shameeg Salie and Stefan de Bod all racing. The u23 time trial and road race titles being the main focus for the Dimension Data Continental Team.

Nicholas Dougall – Rider
The SA Champs are a race I am really looking forward to competing in. The course looks pretty challenging and it’ll be hot and humid. Hopefully we can win back the jersey in the TT and retain the jersey in the road race. That would be a great result for us.

Dimension Data is a global company specializing in information technology services. Founded in 1983 in South Africa its focus areas include network integration and security solutions among others. Dimension Data operates worldwide in more than 50 countries. 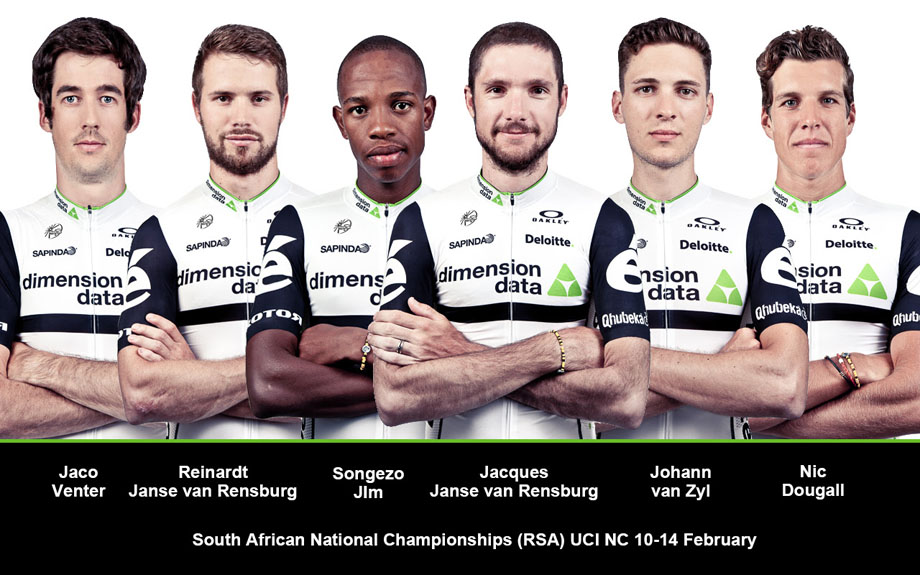