Spring is back – start the new bike year in Bormio

Deep in the heart of the Italian Alps, Bormio with its 4,100 inhabitants is situated in the middle of the Stelvio National Park. The region is also called “Magnifica Terra” (magnificent land) and is a year-round mecca for outdoor-fans. Winter athletes from around the world know Bormio especially because of the FIS Ski World Cup that took place there several times. But also in summer the extraordinary mild climate makes a perfect setting for athletes, and the scenario in the middle of huge mountains such as Ortler-Cevedale and Cima Piazzi is particularly known by road cyclists. Bormio with its centrally based location, excellent infrastructure, around 3,500 accommodations, bike-hotels, tour guides and high-class bike-shops, is an ideal starting point to conquer history-charged climbs such as the Stelvio, the Gavia and the Mortirolo Pass. Natural hot springs and delicious, local dishes care for a fast regeneration on intensive training days. 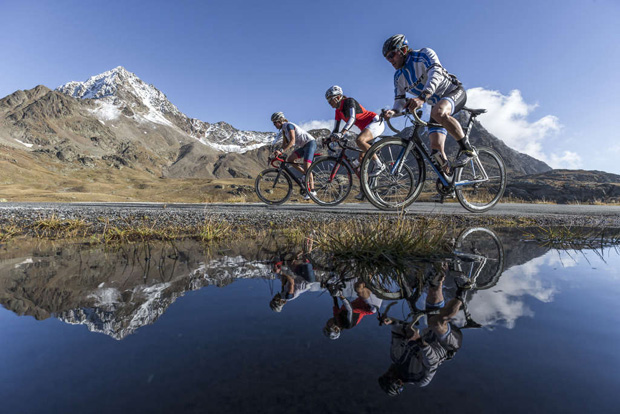 Top tip for road cyclists: The Gavia Pass
If the altitude climb of 1,400m/4,593ft doesn’t take your breath away then the breathtaking views of the glaciers along the Gavia Pass certainly will. Each hairpin turn reveals the next of your alpine road cycling adventure. The Gavia Pass reaches an altitude of 2,652m/8,700ft and is often the highest point on the renowned Giro d’Italia race. The Gavia Pass is not as steep as its famous neighbors, the Mortirolo and the Stelvio, but its scenic characteristics mean that it is growing in popularity each year.

From Bormio, the road leads through the Stelvio National Park with climbs of up to 12%. From Santa Caterina, endless forest switchbacks will weave you up the mountain. Bikers drive past giant mountain massifs like the Punta San Matteo and a short distance later reach the pass itself.

Experienced cyclists can continue along the 12.4km/7.7mi long climb near Mortirolo before heading back down to Bormio. Completing the full circle is guaranteed to leave you feeling on top of the world! 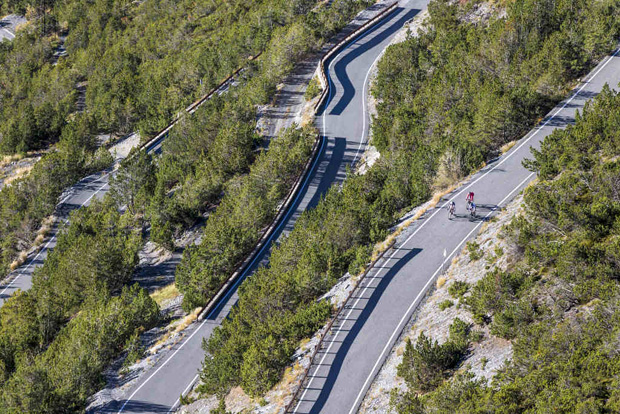    
 The secret passage: the Umbrail Pass
Neighboring the infamous Stelvio road, Switzerland’s highest road, filled with the natural charm of the Alps is the Umbrail pass. The sportive challenge of this charming ride is rewarded by endless panoramas, which fuel the motivation to push on.

From Bormio, cyclists take the western road towards the Stelvio but detour and cross over the Swiss border. They pass through the calmness of the Val Müstair and the river Muranzina before climbing up the serpentines to 2,501m/8,205ft. From the top, riders can watch over the famous Stelvio pass with stunning panorama. A short section of the road is a compact dirt track – but it can be ridden with thin tires. The pass then leads back down to Santa Maria in the Canton Grisons. With an average climb of 8 % the Umbrail matches the challenges of its great brothers, the Stelvio and the Gavia pass.

For those cyclists with extra fuel remaining in their legs – the road can be extended, combining the Stelvio and the Umbrail together. 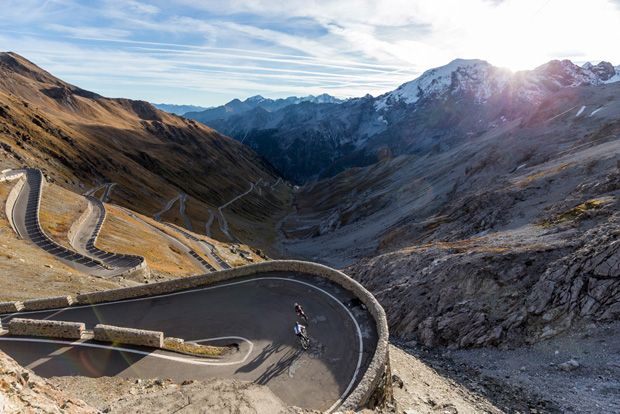 High difficulty
The Queen of the Alpine Roads: The Stelvio Pass
The Stelvio Pass is a mecca for road cyclists. This road has fulfilled the dreams of many cyclists. 40 hairpin turns will take you up to 2,758m/9,055ft. The Stelvio pass is a challenge for even professional athletes. It is also the highlight in the famous race Giro d’Italia. Racers that emerge on the other side of the pass are all champions.

The Stelvio Pass connects Bormio on the Valtellina side, with Prad on the Vinschgau side. The road is one of the highest asphalted roads in the Alps. Lifting your head up in between deep breathes, you will see a fantastic panorama of the nearby Ortler-massif and Monte Scorluzzo. Cyclists can either tackle the western climb from Bormio with 40 turns and an average climb of 7% or take their chance on the famous eastern ascent with 48 turns and an average climb of 7% from Prad.

Heading up the western side from Bormio, cyclists can embark on a detour into Switzerland along the 2,501m/8,205ft Umbrail Pass. The road connects Bormio with the Val Müstair. Another option is to ease off the pace and join the Gavia Pass back down to Bormio.

Some GPS Data for routes around Bormio:
https://www.dropbox.com/sh/v9bl5loe7mpk55n/AAD2s9yD-Z-lAM1oOESIN-iaa?dl=0 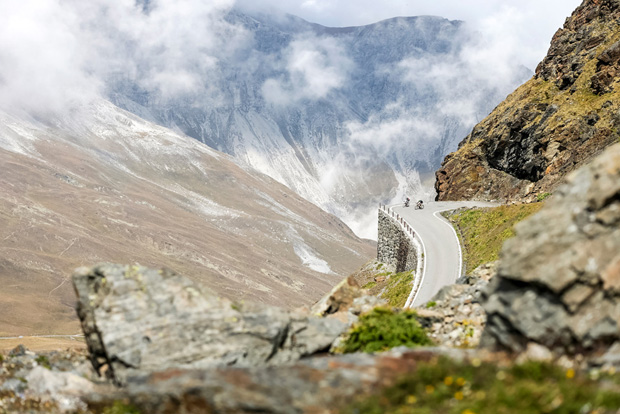 By train:
– From Italy: Bormio is situated along the route Milan-Lecco-Sondrio-Tirano. The trip from Milan to Tirano takes about 2:30 hours. From Tirano take the bus to Bormio.
– From Switzerland: Best way to reach Bormio is with the Rhätische Bahn from St. Moritz to Tirano. From there take the bus to the High Valtellina. 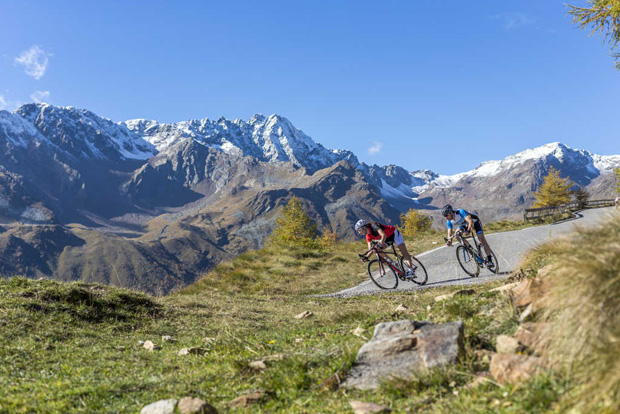 All photos by Markus Greber.

Drapac ride to reduce the impact of bicycle trauma

The challenge of a lifetime: Register now for the Gran Fondo Stelvio Santini 2015