An impressive parade of cycling talent assembled this afternoon to speak to the international press corps on the eve of the 2015 Dubai Tour, which starts tomorrow morning at Dubai International Marine Club, Mina Seyahi.

Journalists from around the world were joined by H.E. Saeed Hareb, Chairman of the Organising Committee of the Dubai Tour, who introduced the following riders: 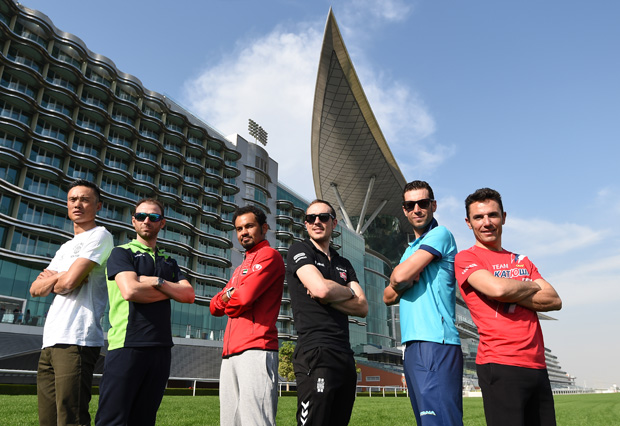 Declarations to the press

H.E. Saeed Hareb: “Welcome to Dubai for the second Dubai Tour. After last year’s race, we received very useful feedback from the riders and the media, and this year we’re delighted to be hosting a much longer race. The cycling teams now have a race on their hands. On my team’s side, we have endeavoured to prepare a good and well-organised event, and we certainly have the weather on our side. We want this race to be inclusive, so we have designed a website in 14 languages where the people of Dubai can say if they are happy or unhappy with the Dubai Tour. Of course, we hope that they are happy.”

Vincenzo Nibali (Astana): “It’s important for me to be here. We have two good sprinters in [Lars] Boom and [Andrea] Guardini. It’s the first race of the season for me. There is one hard uphill finish, where I’ll find out how well I’ve worked over the winter. There are some good riders here, and an explosive finisher like Rodríguez could do well that day, although I’ll try to be right up there with him.”

Mark Cavendish (Etixx-Quick Step): “We should see some good racing. The wind could be a factor, although it wasn’t last year. It’s good to get the early season flowing. No one’s in their July form, it’s about getting the training in, getting some sprints under your belt, and getting the team working. It depends on who you talk to who the favourite is. There are lots of great riders here, like last year. It shows it’s a great race when the top riders come back. I’m just happy to be riding for Etixx-Quick Step and to try for some stage wins. Then we’ll see what we get overall. Anything can happen in a sprint, so you can’t really judge a sprinter’s form on the sprint. You look at everything else. John [Degenkolb] is here, so is [Andrea] Guardini, and a couple of others, so there is some stiff competition.”

John Degenkolb (Team Giant-Alpecin): “It is good to start racing again. It has been a long winter, I’ve done long days on the bike but without intense work. I’m really happy to be here and do some racing. Hopefully I’ll be involved in some sprints, get in one or two good fights and perhaps get a nice result. I’m in a good mood, it’s nice to be here and to have some fun. The German winter wasn’t very nice, so I’m happy to be here and I’m looking forward to the race. We also have a good sprinter in Luka Mezgec, so there isn’t so much pressure on me, although you always go into races wanting to win. I want to win a stage here.”

Alejandro Valverde (Movistar Team): “I think that my form isn’t bad. I feel good and strong, although this is a very different type of race for me. It really suits the sprinters, although there is a stage that finishes with 200m at 17%. I think it’s unlikely that all the sprinters will arrive in a bunch there. My team-mate Juan José Lobato is very quick, so we’ll be riding for him.”

Joaquím Rodriguez (Team Katusha): “I feel good, although I am not planning to hit my best form until Tirreno-Adriatico in March. I’m not a sprinter, of course, but the third stage ends with a tough little climb, and I’ll try to win it, although it will depend on my condition.”

Xu Gang (Lampre-Merida): “Ji Cheng took part in last year’s Dubai Tour, so I’m not the first Chinese participant, but I’m certainly happy to be here. I’m really a climber, so the race route doesn’t really suit me personally. However, my job here is to work as a domestique, and to try and put my team leaders in a good position for the stage finishes.”

Badr Mohamed Ahmed Mohamed Alhammadi (UAE National Team): “Cycling in the United Arab Emirates is still very young but I see a big future for the sport here in the coming years. The government is supporting cycling, and it is wonderful to have a stage race of this quality here, bringing the best riders in the world here. I consider myself very lucky to be able to take part in such a race.” 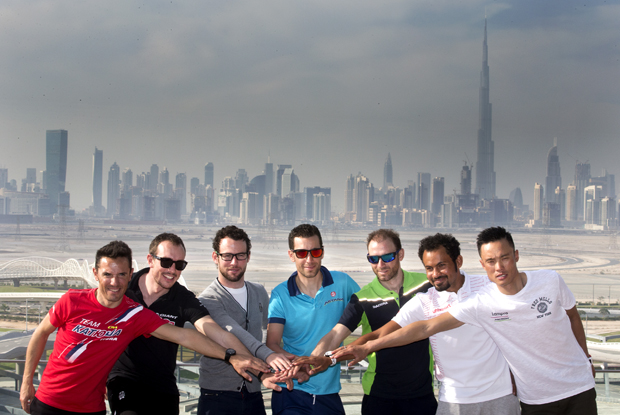 Absent from the race this year is the 2014 Dubai Tour champion, Taylor Phinney, who is still recovering from a serious leg injury sustained in May 2014. Phinney sent a video recording from his training camp in snowy Colorado [link for video here]:

Taylor Phinney (BMC Racing Team): “I’m sorry I can’t be there for the second edition of the Dubai Tour. I was humbled and honoured to win the first edition. But unfortunately I’m still recovering from a broken leg. I should be back in a couple of months, and I’m definitely excited to get back, but sorry I’m not there. I wish everybody the best of luck.”

The Dubai Tour on Television
The 2015 Dubai Tour will be broadcast in 111 countries (an increase of 9 on last year’s figures). 13 TV networks will carry race coverage, 7 of them live, 6 of them in highlights.
The Host Broadcaster is Dubai Sports Channel, which will show all stages live on Dubai Sports Channel HD1, with race analysis and updates in its news bulletins. Dubai Sports Channel will be providing race exposure in Dubai, across the United Arab Emirates and in 22 other Middle Eastern and North African nations.

European and Asian coverage will be provided by Eurosport, who will be offering live race coverage to no less than 70 countries via their Pan-European and Asia Pacific networks. In Italy the Dubai Tour will appear on RAI Sport 2. VRT will broadcast race highlights in Belgium. The Universal Sport Network will deliver the Dubai Tour to audiences in the USA. 10 nations across Central America, from Mexico to Panama, will be served by TDN. In Asia, a number of national broadcasters will be showing the Dubai Tour: JSports (Japan), HySport (China) and True Visions (Thailand). Sony TV is covering the Dubai Tour for India, Sri Lanka, Pakistan, the Maldives, Nepal, Bangladesh, Bhutan and Afghanistan. Fox Sports will be providing race coverage to viewers in Australia.

In addition, the SNTV (Sports News Television) platform will be distributing event news via its international circuit. 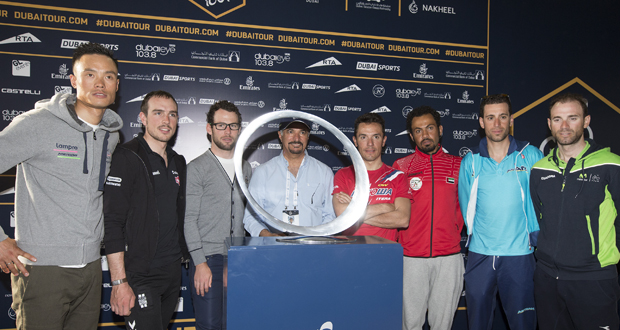 France From Inside: Cycling The Pyrenees