The race starts and finishes in UNESCO World Heritage sites: beautiful San Gimignano, known as the ‘mediaeval Manhattan’ for its many towers, and the extraordinary hill town of Siena. The race’s 200.0km will feature 10 sectors and approximately 50 km of the iconic white roads. These metalled farm tracks have a hard, durable surface made of compacted earth and make the race unique.

The event was won in 2014 by the current UCI Road World Champion Michal Kwiatkowski (POL). 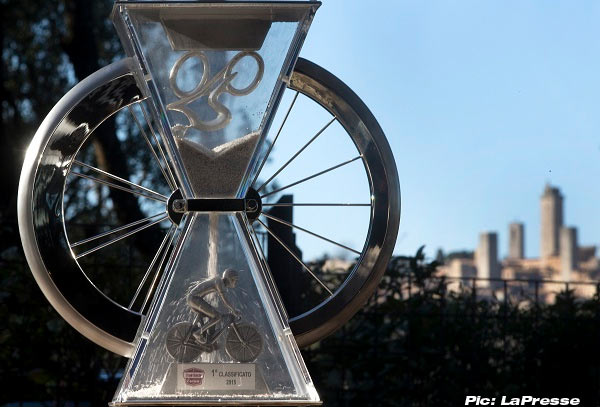 LIVE TV AND INTERNET STREAMING
The 2015 Strade Bianche Eroica Pro will be broadcast in 106 countries around the world.

Rai, the host broadcaster, will show two hours of live race coverage on RaiSport 2. In addition to coverage on Eurosport 2, who provide race commentary in 17 languages, the race will be shown live on VRT in Belgium, TVE in Spain and beIN Sports, exclusively, in France. beIN Sports also holds the rights for the United States of America and 23 different countries in the Middle East and North Africa. In Canada, Strade Bianche Eroica Pro will be shown in English on Sportsnet (Rogers Communications), while followers in Mexico and five other nations in Central America will be able to see the race on Televisa Deportes Network (TDN). As well as live coverage on Eurosport Asia-Pacific in 16 territories, fans in Asia will be able to see race highlights on Sony TV (in India and 7 other countries), TrueVisions (in Thailand) and FPT Telecom (Vietnam). Last but not least, Oceania will enjoy Strade Bianche Eroica Pro, with highlights programmes in Australia (SBS and FOX Sports Australia) and New Zealand (Sky TV New Zealand). The international signal starts at 13:45 CET.

An extremely varied route, labyrinthine and rolling, lacking in long climbs but often punctuated with abrupt ramps, some of them formidably steep. Approximately 50km of dirt tracks, the famous white roads or ‘Strade Bianche’, in ten sections, give the race its distinct flavour. The white roads are metalled and compacted into a hard, durable surface, largely free of vegetation and seasoned with some loose gravel.

After the race start at San Gimignano, the first 33km are over rolling, asphalt surfaces. The route passes close to the splendid medieval village of Monteriggioni, before the first stretch of white road (Sector One – length: 2.2km, difficulty: 2 stars). There follow 13km of asphalt before the race returns to white road (Sector Two – 2.1km, 1 star, perfectly straight, descending slightly). After just 5km of asphalt road, the race confronts the first major difficulty of the route: Sector Three – 5.9km, 4 stars. Beginning with a short, shallow descent, the road then ramps upward and the riders embark on a long climb at gradients of around 10%. At the village of Radi, the race joins a stretch of white road that, in previous editions, formed the second part of section one (now Sector Four – 4.4km, 2 stars). This is followed immediately by the old sector two, now Sector Five (5.5km, 1 star), over less demanding gradients.

Beyond Buonconvento, the riders face the Montalcino climb, the longest of the day (4km at 5%). After the descent from Montalcino, the race joins Via Cassia, an ancient Roman road (now Strada Statale 2) and passes through the feed zone (km 105-108) on the way to San Quirico d’Orcia and the outskirts of Pienza. This 36km stretch is the longest asphalt section of the race and leads to the next white road section. Sector Six (9.5km, 3 stars) begins with a climb over a rougher surface, leading to the village of Lucignano d’Asso, before regaining asphalt roads on the way to Asciano. Sector Seven (the hardest of the race: 11.5km, 5 stars) starts at Ponte del Garbo (km 147). Mostly uphill, with a number of abrupt climbs and descents, notably around Monte Sante Marie, where gradients ramp up suddenly for short stretches of road.

After Castelnuovo Berardenga, a very short stretch of flat white road (300m) precedes Sector Eight, beginning on the other side of Monteaperti, just 800m long but with a steep ramp where the gradient reaches double figures. Then, the route regains asphalt roads at Vico d’Arbia, and follows them as far as Pieve a Bozzone, for the penultimate section of white roads (Sector Nine – 2.4km, 4 stars) on the climb up to Colle Pinzuto, with gradients of up to 15%. The final section begins at km 183.8 (Sector Ten – 1.1km, 3 stars), with a sharp descent followed by a steep ascent (maximum gradient 18%) which finishes at the village of Le Tolfe. From there, 12km remain to the finish line at Siena’s Piazza del Campo.

Tour of the Gila Open Call for Title Sponsor