Svein Tuft has inked a new two year deal with ORICA-GreenEDGE. The eight-time Canadian National Time Trial Champion has proven to be one of the strongest workhorses in the professional peloton. Tuft has been a part of each of the Australian outfits wins in the team time trial over the last two seasons.

“It was a pretty easy decision for me to stay,” said Tuft. “This is team is a home for me and the riders and staff are my family. I knew after the first season that this was the place where I wanted to ride out my career.”

“Svein was one of the first riders I brought across to GreenEDGE,” said Sports Director Matt White. “He left Garmin when I did and spent a year with SpiderTech before coming back to the WorldTour. When we began to assemble the team in the summer of 2011, Svein was one of the first riders on my list. He works very hard in every situation. We always know what we’re getting with Svein.”

During the past season, Tuft won the individual time trial at Tour de San Luis and Tour de Slovénie. He combined forces with Luke Durbridge in a record-breaking ride at Duo Normand and was part of the Tour de France team time trial squad whose win in Nice put Simon Gerrans in the yellow jersey.

In addition to his talent in time trials, Tuft is capable of toiling on the front of the bunch for hours. His proclivity for setting the tempo, controlling the field and chasing down breaks is invaluable.

“Svein is one of the rocks in our team,” said Tuft. “He is one of the most reliable guys we’ve got. He’s a super teammate who is also very accomplished in his own right. It’s great news that Sveino wants to retire with us. He’s a big benefit to all the younger guys on the team – to everyone, for that matter.”

Tuft had trouble naming a single highlight from his tenure with the Australian outfit. Instead, he pointed to several moments that had secured a place in his highlights reel for vastly different reasons.

“My first Tour was an amazing experience,” said Tuft. “The team time trial was one of my best days on the bike. Winning the way we did and in the environment that we did is something I’ll remember forever.”

“The first week of the Tour was huge for us,” Tuft added. “After that, it seemed like I was hanging on for dear life. I crashed more in the last two weeks than I usually do in an entire season. It was a special just to make through a very tough race.”

“Duo Normand was another highlight,” Tuft continued. “It was great to cap of the season with the record with Durbo. It was something I had really hoped we could do before I was done bike racing altogether.”

“The Eneco Tour was a great experience during my first year with the team,” added Tuft. “Winning the time trial and the team time trial there; wearing the jersey. That race was full of ups and downs. I had the jersey going into the last day and lost it because of a time penalty for taking a drink from the car after feeding has closed.”

Looking ahead, Tuft anticipates racing a similar program this year as to the past two years. Illness hampered his spring. He hopes improved fitness will allow him to contribute to the team’s objectives in the Classics, and he will continue to focus on the team time trial.

“My season starts with camp in Australia following by camp in Majorca,” said Tuft. “Oman will probably be my first race followed by Tirreno-Adriatico and the Classics.”

“My goals remain similar from year to year,” said Tuft. “I want to be in the best shape I can to help the team. I also try to align my targets with the team’s objectives. For example, the Giro has a long time trial of 46km that suits both me and Durbo pretty well. That will be an objective.”

“We’re sending a team to Tirreno with the team time trial in mind,” Tuft continued. “The team time trial at the World Championships is without a question a big goal next year, especially after the way we missed out on the win this year. I’m also really hoping to be healthy and fit for the Classics so that I can ride the way I’m capable of riding. I haven’t been able to that for the last few years.”

“Svein was very late to come to road cycling – especially at the this level,” added White. “His first year in the WorldTour was only five years ago. He keeps getting better, especially in these last two years with us. It’s incredible. I’m convinced that we haven’t seen the best from Svein yet.” 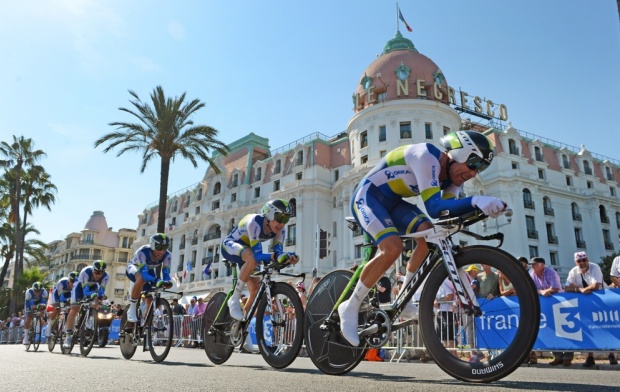