A sprint royale concluded the third stage of the Tour de France today in London. Giant-Shimano’s Marcel Kittel managed to take his second stage victory of the week, while the GC riders were where they had to be and didn’t lose any time. Belkin Pro cycling TEAM’s Bauke Mollema remains sixth overall.

“The last two days were pretty tough and you saw that the peloton took it relatively easy today. I have to admit that was nice,” said Laurens ten Dam on the finish line in rainy London. The Dutchman finished safely in the pack on Monday. “Of course I would have preferred the final to be dry because it got hectic again in the end and so I’ll still have painful legs tonight. But that’s how it goes.

“When we entered the city, it reminded me of 2009. Back then we finished in Barcelona under similar circumstances. I crashed that day because I braked on a white line. When it rains those are as slippery as ice. Today, I saw other riders experiencing the same thing several times.”

Maarten Wynants
Maarten Wynants did what he could to help his team leaders and looked back with satisfaction on the British triptych. “We’ve had some hectic days, but we leave England with Bauke in sixth overall and that’s a good thing. Everything went according to plan.

“Personally, I experienced a tough first day. I had to get used to the racing again. I started yesterday’s stage as if it was a classic and things went OK. Today, went well as well. I didn’t see much of the crowd in London because I was too focused keeping Bauke in the front over the very slippery and dangerous roads.”

Merijn Zeeman
“It was a good day for us,” said Sports Director Merijn Zeeman. “The final 25 kilometres were a bit risky because of the rain, but we were well prepared and knew the parcours. The men know what to do in situations with rain and kept Bauke in the front. Hats off for that.”

The peloton will leave for France tonight after three days of racing in the English countryside. “Our main goal was to survive here in England and we succeeded,” explained Zeeman. “Everyone is OK and I think the last three days have been an amazing campaign for cycling. Tomorrow, in France, I expect a stage like today and we’ll probably see a bunch sprint in Lille.” 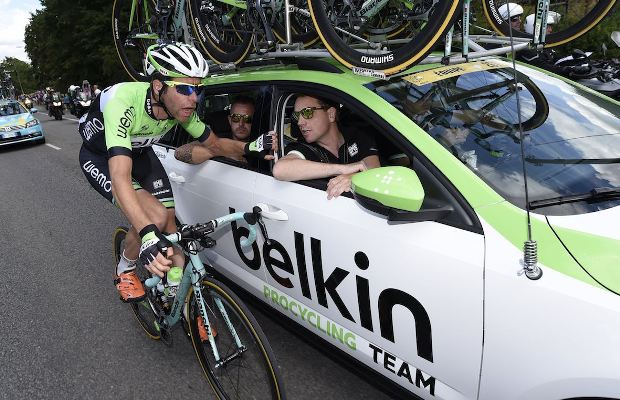 Lotto Belisol: Jürgen Roelandts looks back on the Tour stages in England