It’s not over until it’s over: Team Colombia managed to keep motivation and concentration high until the very last race of the season, and they were rewarded for that, as Leonardo Duque delivered an amazing win at GP Beghelli (Monteveglio-Monteveglio, 198 km), in Italy, on Sunday October 13th, the final day of 2013 season for the Escarabajos.

After the day’s break had been reeled in the final kilometres, Carlos Julian Quintero led up Duque until 600 metres to go, when the experienced rider from Calì unleashed a superb acceleration, getting solo to the finish ahead of Lampre’s Manuele Mori and Elia Favilli. That’s the second win of the season for Leonardo Duque after Tour de l’Ain stage 1, and the 10th in his career.

Duque perfectly finalized a great team effort by Team Colombia: Dalivier Ospina was the first to get in the action, working his way into a dangerous 16-man move started in the early going. The breakaway’s gap was close to 6 minute when the race got on the final circuit (to be repeated 10 times), but the pack went on to reduce the margin lap after lap, until the front group splintered, leaving only 4 man leading the race.

Then it was Team Colombia to take the reins behind: one after another, all the riders led by Valerio Tebaldi pushed to the front to reduce the gap, and in the final lap it was Fabio Duarte to finally close on Coledan, the final survivor of the move, with 8 km to go.

“The team was amazing today – the winner said – working as a unit to clinch the year with a great result, and I think this win will help all of us to restart with greater enthusiasm as soon as we start building up for the new season. Team Colombia and Claudio Corti showed me confidence, both as a team player and as a protected rider, and I am happy I have been able to contribute with two nice wins.”

“This win is for my daughter Micaela, who celebrates her 7th birthday today, and for my grandmother Julia, who passed away 11 days ago at 97. I could not fly to Colombia due to the race schedule, and I want to honor her memory with this success.”

Happiness can be easily heard in Sports Director Valerio Tebaldi’s words: “It was a perfect race, finished by Leo with an outstanding action. We have been racing for him all the way today, and he surprised everyone with a move at 600 metres to go, immediately opening a decisive gap. To do something like that in the final race of the season you need to be more than talented and physically gifted: you need planning, concentration, commitment. You need to be a real professional, like Leonardo showed through the whole year. He was a key piece of our team, and he will be in 2014 too.”

Tebaldi stressed the contribution of every rider to the team’s success: “Today everything went exactly to plan – Dalivier gave us the chance to remain covered until late in the race, and then all the guys – Wilson, Juan Pablo, Duber, Jarlinson – until Fabio and Carlos set up Leo’s attack. I am really happy, there’s no better way to wrap up a season!” 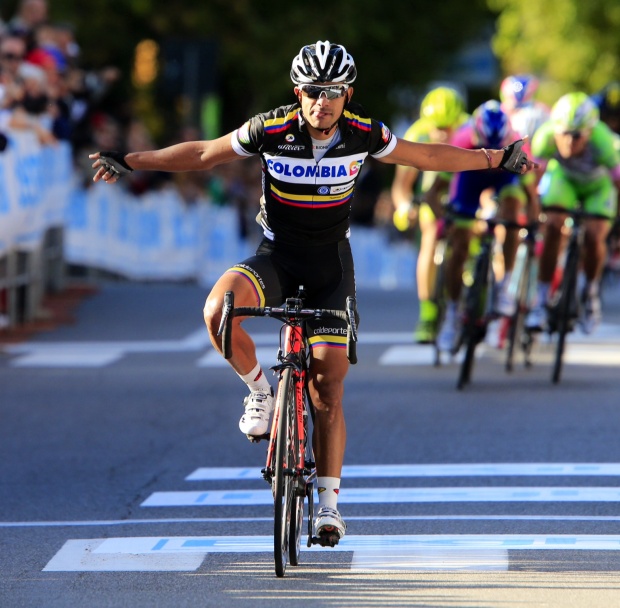