Corti: “We want to show up on every terrain”

In less than 24 hours, Team Colombia riders will start their travel to the 97th Giro d’Italia: the team’s cars and trucks already took their way on Sunday, and tomorrow night the riders and the technical staff will reach their hotel in Belfast (Northern Ireland).

Final preparations are underway for Claudio Corti and the Sports Directors, already focused on the Corsa Rosa’s start on Friday May 9th, with a 21 km team time trial around Belfast. “The depart is now behind the corner, finally – General Manager Claudio Corti said – and our riders are really raring to go.”

“We are going to Northern Ireland with a very good and well-rounded line-up, with good climbing skills but able to seize opportunities in sprints finishes and breakaways as well. Just like last year, we will try to be in the spotlight day in and day out,” Corti added.

Winner of three Giro d’Italia in his career as Team Manager, Corti spoke of his expectations for each of his nine riders at the Giro.

Fabio Duarte: “We expect Fabio to make full show of his capacity at the Giro d’Italia. He never managed to keep the right consistency and concentration through three weeks, but he is now a mature athlete, at the top of his game. He will focus on one day at the time, aiming for a stage victory in first place. If he will be up for more, we will find out on the way to Trieste.”

Miguel Angel Rubiano: “Miguel will be honored show the National Champion’s jersey in one of the most important and prestigious races in the World, and that makes us all very happy and proud. Rubiano is an experienced rider who already won a Giro stage, so we expect a significant contribution for him both for the team and to pursue results on his own.”

Jarlinson Pantano: “In addition to his quality, it was Jarlinson’s excellent consistency in the first part of the season that earned him the Giro d’Italia selection, as he proved to be ready and competitive any time he was called up. At Giro del Trentino we also saw what he can do when working for the Team, so we expect him to be a very important piece for us over three weeks.”

Robinson Chalapud: “His approach to the season was certainly below par, partly due to a physical issue, but he showed improving condition since coming back from Colombia. We expect him to find the best pedal stroke on the way, and maybe compete for the blue jersey in the second part of the Giro.”

Carlos Julian Quintero: “Carlos has not swallowed last year’s withdrawal yet, and that makes us even more confident he will be at this best at the Giro start. He is a key team player for us, and would deserve an important result to reward him for his efforts. Hopefully, it will come at the Giro.”

Leonardo Duque: “Leonardo is another pivotal element of his team, after giving a huge contribution last year in terms of both results and experience. He always manages to play a useful role to the team’s strategy, be it in sprint finishes or more demanding routes. Hopefully, he can be a role model for our youngsters too.”

Edwin Avila: “He definitely showed what he is worth on track – you do not win two World Championships by a case – but he is still a whole lot to prove on the road. He managed to finish the Giro last year, this time he needs to prove something more – not only in terms of results, but of maturity, commitment, concentration. If he wants to become a “real” road racer, that’s his time to show it”.

Rodolfo Torres: “Rodolfo earned his spot with commitment, determination, and the consistency showed in his first months in Europe, when he showed he can be a valuable rider for the team in tough stage finishes. That’s what we expect him to be at the Giro, particularly if bad luck will give him a break after a number of crashes in this early season.”

Jeffry Romero: “This is his third year in Europe, but he is still very young, and we picked him to race the Giro both for his good moment of condition and his quality as an all-rounder: he can climb, and he is pretty fast in the sprints too, so hopefully this experience can help him to mature and help him become more aware of his qualities.” 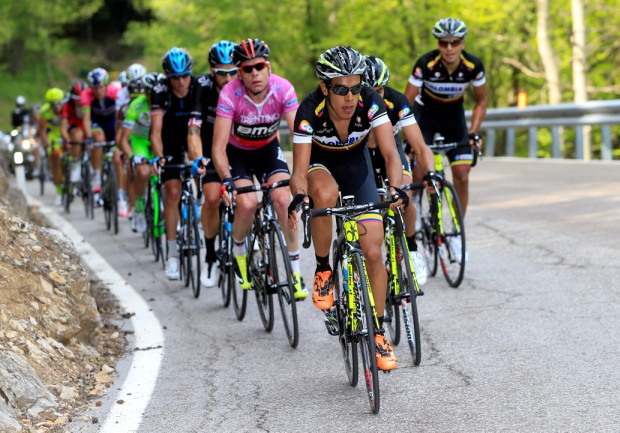 The “Gimondi” is back in great style