Tom Dumoulin (NED) has this season proved that he is worthy of being classed as one of the best time trialists in the world, and to help him in his pursuit of perfection Team Giant-Shimano, in cooperation with Giant have designed a new time trial suit for Dumoulin which will be used on the stage 20 TT of the Tour de France.

Time trialling is a very selective discipline and to reach the highest level in the race against the clock requires a lot of dedication and also raw talent. However once at the top the small changes can make the difference between winning and losing and innovation is key in these developments.

The suit will stand out for more than one reason with it brandishing the stripes of Dutch national champion. But there is much more to it than just looking good.

Giant has been working hard to find materials that will help Dumoulin go faster, and this can now clearly been seen in the new design.

The back of the suit has a dimpled effect like that of a golf ball that enhances wind flow, making the air flow skim over the rider when moving forward.
Another unique material has been used on the top half of sleeves which use embedded lines running at 45 degrees that also greatly enhance air flow when in an aerodynamic position.

The third aspect is the breathability of the suit, this is a key factor when working with new fabrics. Preventing over heating is crucial in maintaining performance.

“We already had a fast suit but it is vital to be as fast as possible, so we tried to make it even faster and succeeded,” said Team Giant-Shimano’s Technical Research & Development expert Tom Davids (NED).

“I worked alongside Giant, using rider feedback, to help design the suit and using new materials we have come up with something unique. Tom is getting close to the fastest in the world and so we have to also help by making some changes to his bike and suit to make his material as fast as possible. I am excited to see how he performs tomorrow.”

The suit has been developed in two options, one with the conventional, yet hidden front zip and another with the zip and the rear so as to keep the frontal area completely clean.

Then the bib short section of the suit is 2cm longer than previously and the elasticity has been made longer to help improve airflow.

Tom Dumoulin added: “I think the suit looks and feels great. The minor alterations are what can make the differences in a big result or not in a time trial, and I think I will benefit from this.”

Stage 20 of the Tour de France is a 54km individual effort on rolling roads between Bergerac and Périgueux, the only time trial of this year’s Tour.

This new time trial suit is just one of the new innovations being used by the team at this year’s Tour de France, including the pre-cooling Slush Puppie. 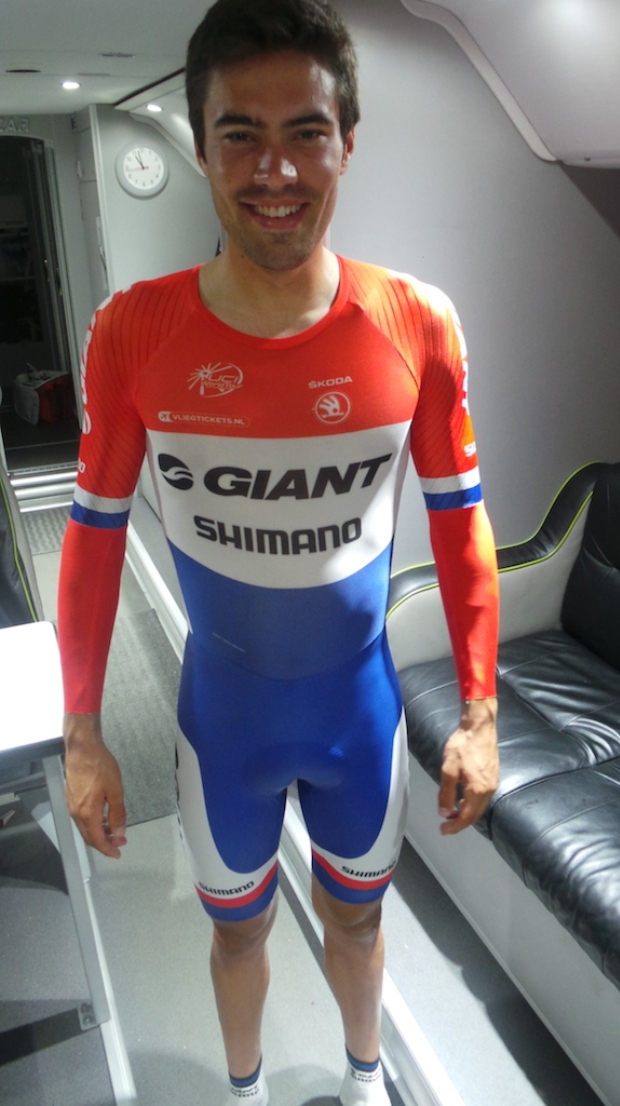