Team manager, technical staff and riders at work for 2014

LAMPRE-MERIDA concretely begins to work in view of 2014 season.

Today, the technical staff has taken part to a meeting with Michele Bartoli (responsible for training and racing programs) and team manager Brent Copeland in order to start the planning of the main appointment for 2014.

Also 6 of the top riders from Team LAMPRE-MERIDA has attended the meeting: Classics hunter Filippo Pozzato, the sprinters Roberto Ferrari and Sacha Modolo, a motivated Damiano Cunego, the 6 time winner in 2013 Diego Ulissi and the world champion Rui Alberto Faria da Costa.
Starting from the king of Florence 2013, Copeland (in photo with Ulissi) and his colleagues has performed individual talks with each cyclist with the aim to check which are their ambitions for the next season, in which races they’d like to take part in and what are their targets.
Another important step has been the definition of the group of athletes that will have the task to support the captains.

Also thanks to the participation of Michele Bartoli, during the meeting there has been time to focus the attention on the trainings planning and on the athletic topics.

Then next appointment has been scheduled for the early days of December, in the team meeting that will take place in Darfo Boario Terme. 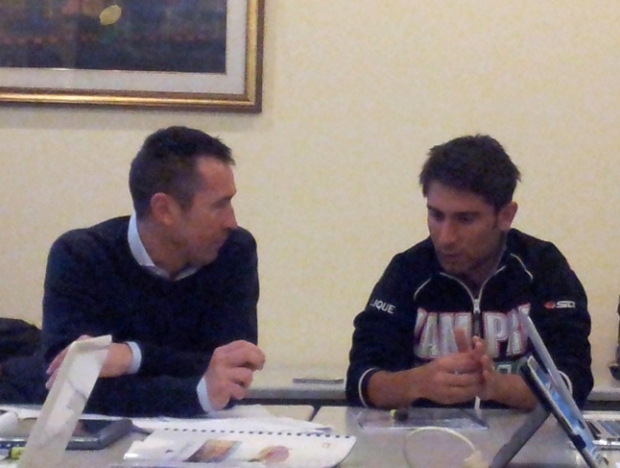