The MTN-Qhubeka World Cycling Centre Africa team put on an impressive performance during the Rand Water Race for Victory on Sunday. The 150 kilometre event is known as one of the toughest in Gauteng, South Africa as a large part of race goes through the Suikerbosrand Nature Reserve.

Calvin Beneke lead the team home to take victory for the development squad, that acts as a feeder team to Team MTN-Qhubeka p/b Samsung. Beneke’s teammates Meron Amnuel and Costa Siebeb were second and third respectively, in a clean sweep of the podium.

“I am very happy to win here as I see this as my home race because these are the roads I train on everyday,” Beneke said. “I think we are really starting to gel as a team now and getting to know each other well which is great for us.”

The race split up as it entered Suikerbosrand Nature Reserve with eleven riders making up the front split. The MTN-Qhubeka World Cycling Centre Africa team had eight riders represented in the move as Beneke explains.

“Initially we plan to put the race in the gutter and split it up before we got to the reserve. We had to adapt our plan and set a fast pace on the hills in the reserve and pretty much rode a team time trial till the finish. We had to worry about Paul van Zweel (Europcar), Jayde Julius (Bonitas) and Dylan Girdlestone (BMC-Westvaal) who made the move so with 10 kilometres to go we took turns to attack. I got away with Alem Grmay and the other guys in the team then rode across to us,” Beneke concluded. 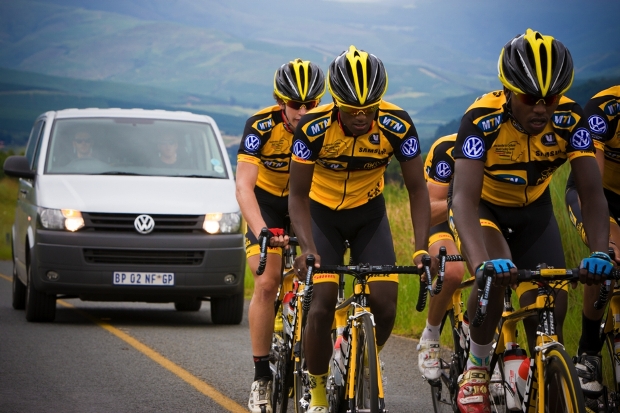 Thanks to Volkswagen Commercial Vehicles South Africa for driving the team and PVM Nutritional Sciences for providing nutrion.

The Alpine Challenge 2013 draws to a close, but not without some incredible achievements and lasting memories