Last year’s edition of the Milan-Sanremo is one that would never be forgotten, from the rain, cold and snow to the mid race transfer and finally to the eventual outcome where Gerald Ciolek put African cycling on the map by taking a most magnificent victory. Come Sunday, Team MTN-Qhubeka p/b Samsung will return to the scene of its most famed victory to date and take part in the Milano-Sanremo as the defending champions.

Team Principal, Douglas Ryder, is excited to be back at the first Monument of the year, reflecting on the good memories of last year and the significant role it has played in the teams’ development over the past year.

“Last year the first victory was just to be invited to Milano-Sanremo and to be able to stand on the start line with the great riders and teams in cycling, to win the race was the immediate realisation of a dream. We had so many highs and lows with crashes, the bad weather, freezing riders totally unaccustomed to the conditions. It will be a race we will never forget.”

“Our credibility in cycling and opportunities that came from that iconic victory has helped shape the team to focus on big, bold goals and work harder. We had just won a monument in cycling and now people expected more from the team. It also helped shape our 2014 season in terms of race invitations, we have more world tour invites and that is assisting us to go to a higher level.”

The Sports Director for Team MTN-Qhubeka p/b Samsung at last year’s edition of the race was Jens Zemke, Zemke will once again direct the team this Sunday and he told us of the personal meaning the La Primavera had for him.

“After winning the women’s race with Trixi Worrack in 2005 and coming 2nd with Heinrich Haussler in 2009, a dream came true for me to win last year with Gerald. It was one of my most exciting days in cycling. It feels great to win the historic Milan Sanremo, especially as a Pro Continental team from Africa. It is always only the big teams fighting for the victory at the monuments, and we showed last year that we were very much a part of them.”

While Team MTN-Qhubeka p/b Samsung are able to reminisce on the amazing experience that was from last year, they are equally excited at the prospects that await them on Sunday. The teams line-up in itself has already becoming a talking point for this year’s Spring Classic.

“We will have two black Africans with Daniel and Merhawi. Merhawi will also be the youngest rider in the race. With Jaco, Jay and Louis we have 3 South African riders. It was an illusion a short time ago to have 5 African guys from 1 team starting a World Tour race, let alone a Monument. These riders will support the defending champion with all they have. We are well on the way of bringing African riders to the big races. With this, our project moves forward in also bringing a new continent to the cycling world,” said Zemke.

The African riders will be joined by the defending champion Gerald Ciolek, Ignatas Konovalovas and the promising young Italian, Kristian Sbaragli. Ryder also shared his thoughts and reasoning behind the team selection.

“We are being consistent with what we had planned all along. We are an African team that has leveraged our European riders to assist in mentoring our African riders to a higher level, and they have done a great job and continue to do great work. To bring 5 African riders to a title defence of such an incredible event in world cycling, is a first and shows our intent and the potential.”

With the race due to a run its course again and new champion needing to be crowned this weekend, Zemke is under no illusion at the task that lies ahead of the team and realises despite being defending champions, Team MTN-Qhubeka p/b Samsung are still very much the underdogs on Sunday.

“Last year i told the boys, that we are already winners to participate in such a big race. Expectations have changed now for the team, we need to perform on a high level. We are still not mentioned with the favourites though and that is why we only can surprise in a race like Sundays. With all the bad luck we had in the last weeks (Linus Gerdemann out with a virus infection, Sergio Pardilla out with a broken hand and some more injuries) we can only hope that luck will favour us on Sunday.” 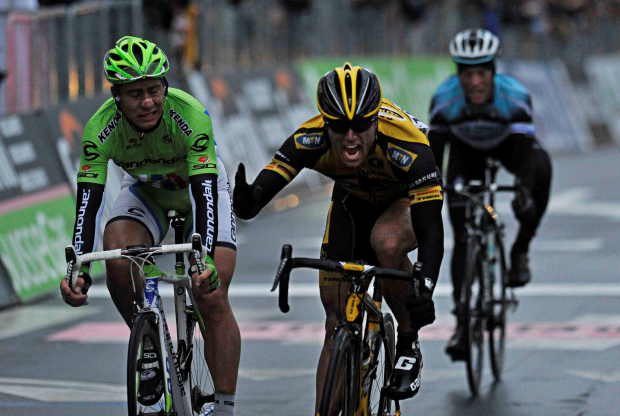