With the Tour de Korea starting on Sunday and the Tour de Beauce starting on Tuesday, Team Novo Nordisk participates in two high profile stage races at the same time. This means that while one part of the world’s first all-diabetes professional cycling team has finished its race already, the other only starts its day having breakfast on the opposite side of the globe. The part of the team consisting of the sprinter Andrea Peron as well as the two Spanish mountain specialists David Lozano and Javier Megias have recently prepared for the Tour de Beauce at a short-term training camp in the mountains of the Vermont. “It’s June and the team is 100% prepared”, says Team Novo Nordisk general manager, Vassili Davidenko. TNN sports director in Korea and former Tour de France stage winner, Massimo Podenzana, has similar expectations: “You shouldn’t underestimate the race, but we hope to succeed. And we hope to help Martijn Verschoor get some good results on the way to sharing our message of “Changing Diabetes” with the world.”

This is first time Team Novo Nordisk will participate in Canada and Korea. “Martijn, back then racing for another team, has already won a stage in Canada” as Davidenko says. “He won’t be here this time but we bring Andrea Peron, who’s looking forward to fast sprints. I believe that Javier and David also will be also able to perform well. It’s a perfect chance for them to aim for the general classification. Kevin, Thomas, Joonas and Fabio will also race aggressively and try to get into breakaway groups.” The Dutch rider, Martijn Verschoor, is the most experienced rider in the 7-man team and most promising rider for Team Novo Nordisk in Asia. The 28-year-old has proven to be in good shape lately: “I was 16th in the uphill finish in Philly, and that’s not even the kind of finish I like… I’m looking forward to having a great Tour de Korea. I’m sure the team will work well, but we must keep in mind that it’s mostly comprised of very young professionals. The Tour de Korea, however, can be a good school for these riders. We will also try to have some good results there. I am excited to race here because I’ve heard a lot of good stories about this race. And for me, it’s the first time in Korea.”

The Tour de Korea, takes place from June 9th to 16th and consists of seven road races and a team time trial. The race starts in Cheonan with a 172km stage. The first stage will most likely be one of the easier parts of the event. After 52km, the riders face a third category mountain classification which will be the hardest bit of the day. What follows on the way to the finish in Muju will be fairly flat. The sprinters, such as Martijn Verschoor, have good a chance to win the stage. The second day is 138km and includes 2 mountain classifications– a great chance for breakaway groups. However, as history has shown, the sprinters will fight for the stage win again. The first mountain finish will take place on the way from Gumi to Yeongju. The 156km stage is therefore the first chance for the GC riders to come on the stage. The fifth stage will again be the sprinters’ business, while the fifth stage will require pure team tactics, a lot of concentration and sheer speed: the team time trial is the highest art of road racing. In Korea it will be 25.5km long. The 6th stage taking place on Friday, June 14th, allows for the riders to take a short breath. Over some 55km, the peloton will ride downhill. And yet the riders will also race 120km through the mountainous region of Pyeongchang, which hosts the 2018 Winter Olympics. There will be a first and second category mountain classification. The penultimate stage will again contain a first category mountain classification and will yet end with a mostly downhill section. The final stage is 90.8km long and leads from Hongcheon to Hanam, clearly a chance for the sprinters again.

The 28th edition of the Tour de Beauce in Canada provides the riders with challenging and varying stages. In the opening stage, covering 165km, with start and finish in Lac-Etchemin, the riders will face two mountain classifications. Various further climbs make life difficult for the sprinters. A first decision in the general classification might be made during the 152km second stage with start and finish in Thetford-Mines. The continuous up and down offers a great chance for breakaway groups. Two challenging mountain classifications at 50km and 30km to go spice the stage up further. The third stage of the Tour de Beauce from St-Georges to Mont Mégantic again favors climbers since it ends after 164km with a fierce uphill finish. The fourth stage will be a time trail with start and finish in St-Benoît-Labre. The organizers have included some 200 meters of climbing even in this relatively short 20km stage. The fifth stage is perfect for spectators taking place on a loop right in Québec. The 126km will be, and this comes with no surprise, be fairly hilly. The final stage also takes place on a hilly course in St-Georges and is 107km long. The riders will do 7 laps on the final loop. 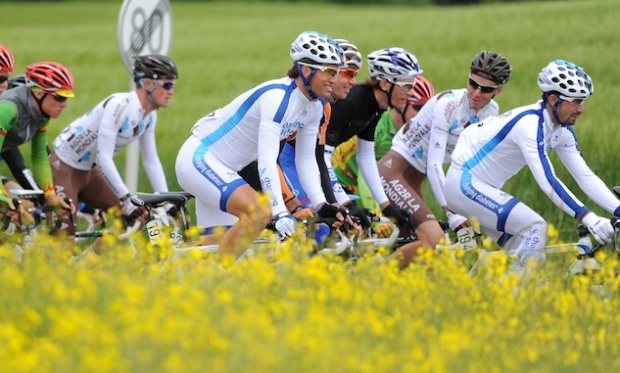