Team Novo Nordisk represented itself very ambitiously again during the 6th stage of the USA Pro Challenge. The team had first made it into a breakaway group before Andrea Peron impressively sprinted to the 6th position in the final bunch sprint. This meant that Team Novo Nordisk, the world’s first all-diabetes professional cycling team, had two reasons to celebrate at once after 185.4km (115.2m) that lead from Loveland to Fort Collins. Peter Sagan from Team Cannondale took the stage win again.

“This was a good day for the team”, says Vassili Davidenko, Corporate Vice President Cycling Operation of Team Novo Nordisk. “The guys did a good job of covering the break. Our plan was for Javi to make his move the minute he reached the mountain, which he did. At the end the main field was too fast, and it was clear that we are going to attack the 15-man breakaway. Amazing job and effort by Javi today. He demonstrated confidence, and that confidence translated over to his teammates.”

The tactics from Team Novo Nordisk therefore went entirely according to plan on their way to Fort Collins. “Today’s strategy was to work together to get in the break. I tried to attack for what felt about 30 times and at about 50km, I finally got the break,” as Javier Megias describes the first part of the race. “We started to work together, moving very fast – averaging about 45km/hr. At the finish, riders started to attack; and with 2km to go, I saw the riders approaching behind me,” as the 20-year-old from Spain adds. “I really wanted to win, but Andrea got top ten and Joonas got a good result, too – so it was amazing for our team.”

Peron was accompanied by his Finish teammate Joonas Henttala who gave him a strong lead-out in the final sprint. The 24-year old, who currently races for the first year as a professional cyclist, represented his jersey “Changing Diabetes” with a lot of self-confidence among the strongest sprinters in the world. ”This was a hard, fast stage, and the result of strong teamwork. It was not easy to take the position. I got a second wind today – my legs feel good,” as the young Italian describes the strong performance by Team Novo Nordisk. “This was a fast stage – the fastest of the tour. One major climb and plenty of rollers, especially in the last 30km. We pushed ourselves out there, and, going into the final, I knew we were in good position.” says Joonas Henttala. Congratulations to the whole team,” Davidenko says: Our guys did a good job sitting in the group, and in the final sprint, Andrea and Joonas went for it.”

Tomorrow’s last stage of the USA Pro Challenge will be 75.8km (47,1m) with start and finish in Denver.

There are riders from six nations riding the USA Pro Cycling Challenge for Team Novo Nordisk: 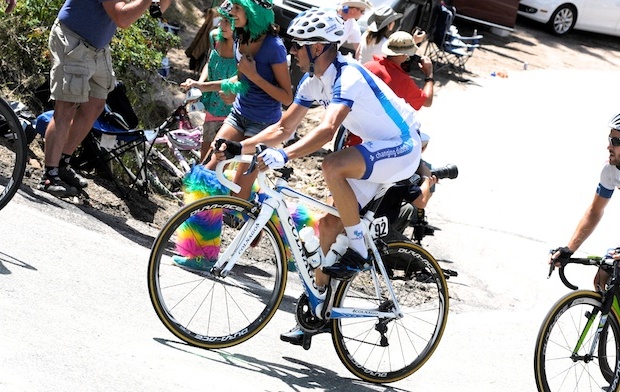