Team Novo Nordisk revealed its full team roster and updated navy blue kit for the 2018 season. The world’s first all-diabetes pro cycling team will race its sixth season with 16 athletes from ten countries. The two new riders joining the team are Sam Brand (UK-Isle of Man), who raced as a stagiaire with the men’s professional team since August, and Emanuel Mini (ARG), who is moving up from the team’s development squad. 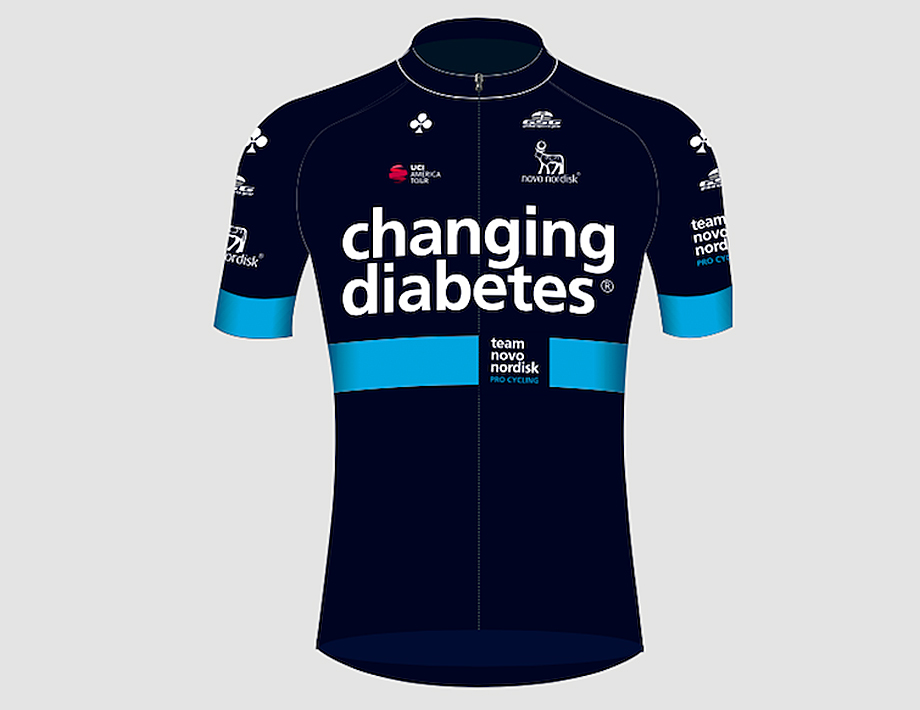 “The 2018 roster features some exciting changes for Team Novo Nordisk. We reduced our roster size so we can focus on the dedicated athletes whose primary goal is to inspire, educate and empower everyone around the world affected by diabetes,” Team Novo Nordisk CEO and co-founder Phil Southerland said. “This new roster features our most committed athletes to date, and you can feel the increased motivation and morale that’s driving them to succeed. We are going into the 2018 season with renewed confidence and are motivated to get on the top step of the podium.”

After racing five seasons in a predominantly white kit, the 2018 season will see Team Novo Nordisk racing in a navy blue GSG-designed jersey that features a light blue circle and the words Changing Diabetes across the front.

“The elements within this Italian designed and produced jersey have significant meaning to the diabetes community, and we are proud to continue bringing global attention to diabetes and creating heroes for everyone affected by diabetes,” Southerland said. “The blue circle is the symbol of the diabetes community and it reflects unity. Changing Diabetes is Novo Nordisk’s response to the global diabetes epidemic. At Team Novo Nordisk, we race to change diabetes.”

All athletes on Team Novo Nordisk race with type 1 diabetes. Since its launch in December 2012, the organization has focused heavily on identifying and developing endurance athletes from around the world with diabetes, building an extensive junior and development program. Both Brand and Mini raced with Team Novo Nordisk’s development squad before moving up to the men’s pro team.

“Our 2018 goal is to continue developing all our pro riders to be competitive at the top level of the sport by racing at UCI World Tour and HC categorized events around the globe,” Team Novo Nordisk Senior Vice President of Athletics Vassili Davidenko said. “Over the past six seasons, we’ve gone from being a team that struggled to find enough riders to field a complete squad to now being on the podium and aggressive in breakaways at some of the biggest races in the world. We plan to continue this progression, and I’m excited to see what the 2018 season brings our squad.”

Brand, who was diagnosed with diabetes at age 10, first joined Team Novo Nordisk as a member of the elite triathlon team. In 2013, following his qualification to race at the ITU World Championships, he gained the attention of Team Novo Nordisk and joined the program the following season. In 2014, he finished 12th in his age group at the Nottingham Triathlon, a World Championship qualifier. Yet by 2015 and after graduating from university, Brand decided to focus exclusively on cycling and moved over to Team Novo Nordisk’s development squad in the 2016 season. During the 2017 season, he earned three top 10 finishes, including two podium finishes, with Team Novo Nordisk’s development squad.

Mini first met Team Novo Nordisk when the team was racing at the Tour de San Luis in Argentina in 2014. He had been diagnosed with diabetes the previous year and was surprised to see people with the same condition as him racing against the best cyclists in the world. With fresh drive, he resumed training and competing, and he took 10th overall at the Argentinian Rally Championship that year. After attending one of Team Novo Nordisk’s talent ID camps, Mini officially joined the development squad in 2015. During the 2017 season, he earned eight top 10 finishes with Team Novo Nordisk’s development squad.

About Team Novo Nordisk
Team Novo Nordisk is a global all-diabetes sports team of cyclists spearheaded by the world’s first all-diabetes UCI Professional Continental cycling team. In 2012, Phil Southerland, co-founder and CEO of the team, and global healthcare company Novo Nordisk, came together to create Team Novo Nordisk, based on a shared vision to inspire, educate and empower people around the world affected by diabetes. For more information, go to www.teamnovonordisk.com.

On The Road With BMC!