Team Sky has selected its line-up for the 100th edition of the Tour de France, which starts in Corsica on Saturday 29 June.

The team is drawn from five different nations and leader Chris Froome is one of four British riders in the line-up.

Eight of the team were together at the Criterium du Dauphine, where Froome came first and Richie Porte second, with Kanstantin Siutsou joining that line-up for the Tour de France challenge.

The full Team Sky line-up for the 2013 Tour de France will be:

He heads into the Tour as team leader, with a string of stage-race wins in 2013 at the Tour of Oman, Criterium International, Tour de Romandie and Criterium du Dauphine. Previously on the podium in two Grand Tours; last year’s Tour de France and the 2011 Vuelta a Espana.

An integral part of Teams Sky’s successful Tour de France team in 2012, he is currently in his most impressive season to date. The Tasmanian climber captured his biggest win to date at Paris-Nice in February and was second at both Vuelta al Pais Vasco and Criterium du Dauphine.

The Norwegian all-rounder has lined-up at each of Team Sky’s three Tour de France appearances – the only ever-present – winning two stages, including the team’s first Tour stage win in 2011. He can contest sprints and turn into a powerful climbing domestique.

He makes his Tour de France debut this year after impressing at the Tour du Dauphine joining. Born on the Isle of Man, he won Olympic Gold for Britain in the team pursuit at London 2012, alongside team-mate Geraint Thomas.

New to Team Sky this year, the Belarusian has gained wide recognition for tireless stints on the front of the peloton and is a key asset on the climbs. He will mark his 32nd birthday on the eve of this year’s Grand Depart in Corsica.

Joined Team Sky this season and has played a key part in Chris Froome’s victories at the Tour de Romandie and Criterium du Dauphine. This will be his third Tour de France but his first in Team Sky colours. He brings invaluable experience and a relaxed demeanour.

One of two Belarusians in the line-up, he brings both power and climbing prowess in equal measure. ‘Kosta’ has made four previous appearances in the Tour de France but his last, in 2012, ended early after he broke his leg in a first-week crash.

A second rider making his Tour debut, the 2012 British national road champion has earned legions of fans due to his unwavering work ethic and dedication to the cause. One of the most powerful men in the peloton, Stannard is a huge asset over three weeks.

After making his Tour debut in 2007 he wore the white jersey for Team Sky during both 2010 and 2011. The Welsh-born rider has won two Olympic Golds in the team pursuit, in Beijing and London, and returns to the Tour after a year spent focused on the track.

“The Tour de France has been the main goal for Chris this season and he goes into the race in great shape. With four stage-race wins this year Chris has not only grown as a rider but also importantly as a leader.

“Around him are eight quality riders who have each earned their place in the team. They will add the climbing ability and the engines to provide the perfect support for Chris, especially in the crucial mountain stages.

“We’ve seen what this group are capable of at the Dauphine and all have raced with Chris successfully at some stage this year.

“We have got a very strong squad for the Tour and we’re all looking forward to getting underway.”

Team leader Chris Froome said: “I’m delighted with the balance in this team and every one of these riders is going to play a pivotal role once the racing begins. Most of us were at the Criterium du Dauphine and I was hugely impressed there with the way the team came together in control of the leader’s jersey. It gave me huge faith and I could not be happier with the selection.

“Ian, Vasil and Kosta each possess huge engines that you can’t go into a Tour without. They will be controlling things on the front for long periods of the race and pacing me once the climbing begins. Geraint, David and Pete will then take up the reins. Those guys have really improved their climbing abilities and will be a massive help when the pace really ramps up in the mountains.

“In Richie we simply have one of the strongest climbers in the world. He is another rider who’s more than capable of winning a Grand Tour in his own right. Having him in our ranks gives us a number of different options to play. The same applies with Edvald – he is flying after his victories in Norway and the Dauphine, and he has already proved he can win stages at the Tour.

“We’re ready, excited and can’t wait to get going.” 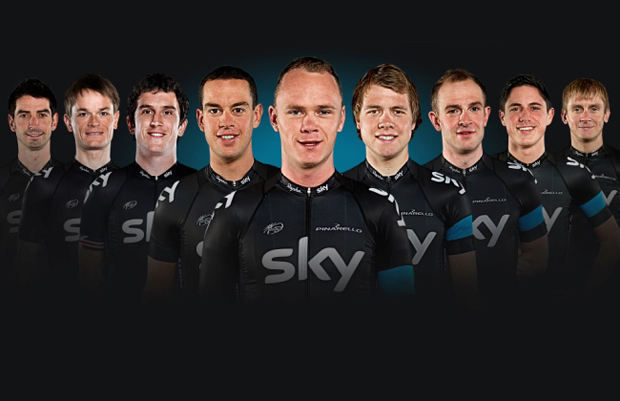 Lotto Belisol Announces its Selection for the Tour de France 2013