Team MTN-Qhubeka p/b Samsung continued its preparation for the UCI World Team Time Trial Championships on the Mugello Circuit in Firenze on Tuesday. All the biggest teams in the world will contest the event and a good result is a major target for Africa’s first Professional Continental team.

The team would like to thank the Mugello Circuit for the invite to the highly quality racing track.

“Today was critical for our preparation for the championships,” said Director of Health and Performance, Dr Carol Austin. “The track firstly offered a closed road so from a safety point of view we didn’t have much to worry about. We could push the athletes to the limit on the closed road and the technical circuit ensured we could work on cornering and aerodynamics. The guys were all very happy and I think we achieved a lot today. We’d like to thank the Mugello Circuit for their generosity.”

“The day was fantastic. It was exactly what we needed for our last few days of preparation. The day had intensity and was a great morale booster for the team. It was almost like a team building exercise as a new environment brings new perspective and excitement,” Sports Director, Kevin Campbell added.

Paolo Poli, the CEO of Mugello Circuit expressed his delight at hosting the team.

“It was a pleasure for Mugello Circuit to host Team MTN-Qhubeka p/b Samsung, a professional cycling team from South Africa. They have prepared on our track, to race the Team Time Trial at the 2013 World Championships in Florence on Sunday, 22th, September. Mugello Circuit, is not only a track for motorsports, the Home of Italian Motorbike Grand Prix, but a multifunctional sports facility where it is possible to play many sports”

The final six-man team for the championships will be announced later this week. 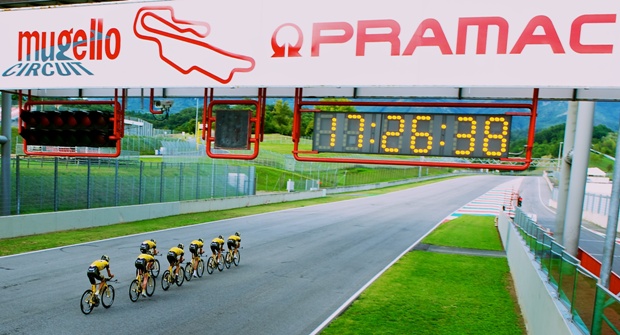