The seventh annual RBC GranFondo Whistler will take place Saturday, September 10th with an expected 4,500 cyclists.  Athletes from around the world will gather in Vancouver’s Stanley Park to ride the Sea-to-Sky Highway on a dedicated car-free lane to Whistler. 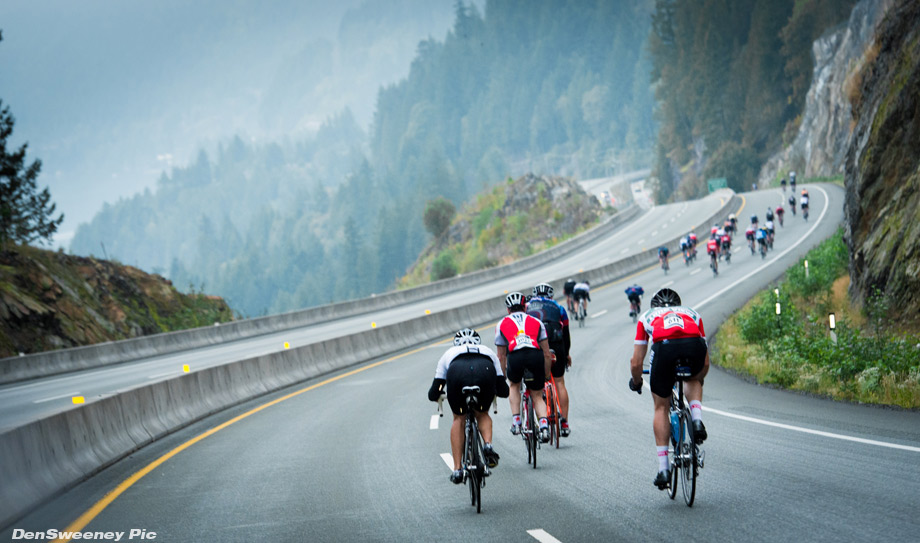 The elite field of Giro athletes will depart ahead of the recreational riders and race the 122 km distance for a claim of the $50,000 prize purse. With the generous support of Robert J. Macdonald, the Giro at the RBC GranFondo Whistler boasts one of the largest cash purses in North America. Open to licensed category 1, 2, and 3 cyclists, the Giro will offer cash prizing to the first 20 finishers in both the male and female categories. Top place purse is $15,000 for each the male and female.

Other categories include the Medio event starting from Squamish, which offers a 90km ride and finishes with all the festivities in Whistler. This is the third year of the Medio event. The Forte event is for cyclists who want the added challenge of climbing Cypress Mountain before cycling to Whistler for a total of 152km.

There will be a celebration of cycling at the finish line as all the cyclists will gather at Whistler Olympic Plaza. Each rider will get a well deserved burger and beer or beverage at the finish line. The party goes until 4pm and will be followed by a free outdoor concert with Steven Page headlining at Olympic Plaza; there will also be a GranFondo Video Release Party, sharing the adventure of the day, at Buffalo Bills in Whistler at 9pm sharp.

Prior to the Saturday event, the RBC GranFondo Whistler kicks off with the 2016 VeloSpoke Bike Expo. The Expo is free and open to the public on Friday September 9th from 10am to 8pm at the Vancouver Convention Centre East. Over 25 cycling and lifestyle businesses will be showcasing their products and services.