The Alpine Challenge 2013 draws to a close, but not without some incredible achievements and lasting memories

HotChillee, Annecy, 14th September 2013 – The Alpine Challenge 2013 is complete and the celebrations have begun. 331kms with a total ascent of 6676 metres spread over The Prologue and three stages, all within three days. During the event, which marks the end of HotChillee’s Global Event Series, there was a dramatic swing in the weather from torrential downpours, to warm sunshine. There was some truly heroic cycling across the four speed groups, all complete with rolling road closures, a full support crew, mechanics, Lead Cars and motorbike outriders.

The thought of today’s Stage Three was enough to make even the strongest riders feel uneasy and as they gathered at the Rider Village in the morning, the roller-coaster of emotions was visible on many people’s faces. 103kms with a total ascent of 1939m taking on Col de L’Epine and Col de la Croix-Fry; two Cols that had been on the global stage in the Tour de France earlier this year. 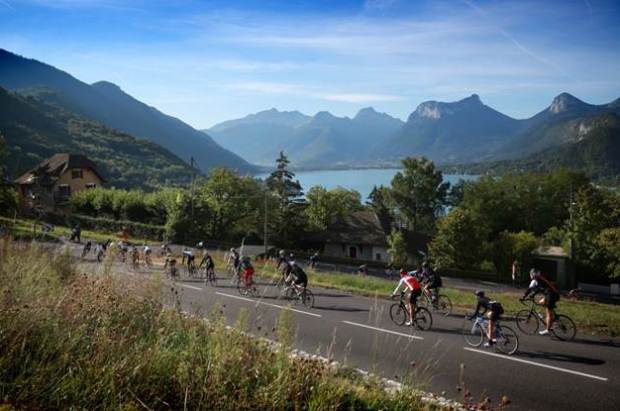 Speaking before the start, Nick Mead in Group One said: “Yesterday was tough. At one point I was exhausted – almost empty – and questioning what I was doing. We then started our descent to the lake and it emerged, glistening in the sunshine. That’s when I knew why I was here and the pain went away. I’d rather be here, cycling, than anywhere else at this moment in time.”

The seeded speed groups set out from 9am, pedalling under sunny skies. Weather forecasts had varied, depending on which you were looking at and some forecasts threatened rain. It turned out that this threat was empty as, much to the riders relief, the rain did not come. As with the previous stages, the ride started with a long, steady incline up and out of Annecy, with Lake Annecy dominating to the right and the mountains to the left. The first 30kms were undulating, interrupted by a couple of short, but abrupt climbs. The lone riders out for their Saturday rides could hear the whirr and banter of the peloton coming; some managed to join momentarily, eventually being dropped out the back. 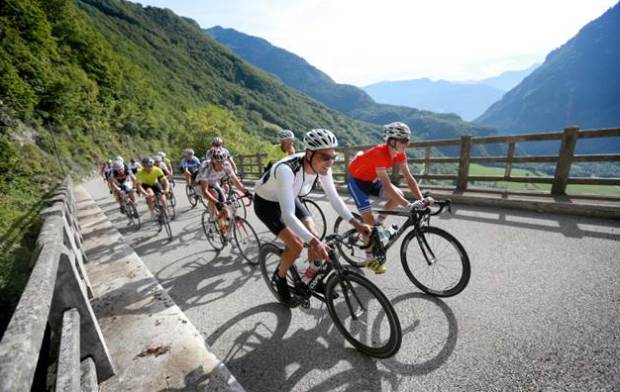 The route headed South through the beautiful lakeside towns of Talloires, Balmette and Verthier, where people cheered the peloton on from the side of the road. Turning away from the lake, a Base Jumper flew overhead and paragliders floated calmingly through the air. It was a gentle start to get tired legs working again, but riders were anxiously waiting for the Alpine climbing to start again.

It was then into Faverges, a typical picture-postcard French town. The road out of Faverges wound downwards, through rich-green fields. But what goes down, must go up when in the Alps and they approached the bottom of Col de L’Epine. It was then time to get heads down and tackle the climb, which took riders 1012m up. On the ascent there were a few supporters, and where the Tour had been months before, a remote controlled bicycle on wires was set off, pacing the riders like dogs after a rabbit – the remote controlled bike appeared to triumph.

Once the riders had cleared the towns, the roads narrowed and a sheer drop to the side was visible. Looking down the houses and cows in the field looked like small scale models. It was an unrelenting climb to the top, with snow-capped Mont Blanc showing itself in the distance. At the summit there was a quick regroup and riders descended. The hard work was not over and Col de la Croix-Fry beckoned. No sooner had the riders emerged out of a short stretch of woodland at the bottom, the 1km to go flag appeared, alerting riders to the challenge that lay ahead: the 11.2km Timed Climb up Col de la Croix Fry. 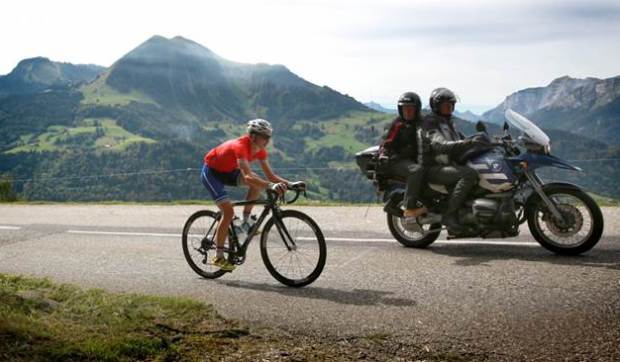 It was an unrelenting climb to the summit, with riders putting in astonishing efforts. It was no surprise that Felix Barker was triumphant, attacking the climb and getting a time of 00:35:02. Felix was followed by Anthony Purnell (00:38:00) and Dave Dent (00:38:53). Felix will take the Red Jersey home in 2013. In the women’s field, Jenny Foreman tore away from the rest of her group and crossed the line in a time of 00:41:28, followed by Kara Chesworth in 00:44:20. Jenny held on to the Pink Jersey throughout the race, with an overall 5th place.

Lunch was held at the top of Col de la Croix Fry and riders relaxed a little in the knowledge that it was 33kms of mainly downhill to the champagne-fuelled finish at the Riders Village. Speaking from the summit, Scott Berry of Team Chain Reaction Cycles said: “That was a climb that keeps you honest. You have to keep steady, stay within yourself and turn the pedals. As we took the corners you could see the valley and that gave the motivation to keep going. It was a magical climb.”

After lunch, riders headed back down the Col and into the town of La Clusaz, winding back through the mountains. It was mainly downhill and as the lake came into sight riders began to celebrate. Back at the Rider Village people took a well-earned dip in the lake, relaxed and compared times and tales.

At the finish-line Stephen Niblett from Team Chain Reaction Cycles said: “I’ve followed cycling my whole life and to ride in this area is like a dream come true. I did The London-Paris last year and the plan was to do something different this year. I was so pleased when I got a place on the Alpine Challenge and ploughed everything into it. I’ve been training since January. It’s been brilliant and completely outperformed my expectations. It’s a fantastic event, with amazing climbs and stunning views.”