For the final of it’s first season, Team Novo Nordisk returns to China for the last race this year. The Tour of Hainan on the Chinese holiday island is one of the most beautiful races in Asia and yet one of the hardest. The nine stages with a total of 1418,6km that start and end in Chengmai in the northern part of the island are the fifth “Hors Catégorie”, the highest category in the international cycling confederation UCI (Union Cycliste Internationale) for the world’s first all-diabetes professional cycling team.

“It’s like a dream to end a long and successful season on an island as beautiful as Hainan,” says Vassili Davidenko, Corporate Vice President Cycling Operation of Team Novo Nordisk. “We will start with a very young team. Apart from the stage race and mountain specialist Javier Megias, who lately wore the mountain classification jersey at the Tour of China, all riders are part of a ProTeam for the first time this year.” Nonetheless, the team travels to the South of China with high expectations. “We are eager to finish successfully despite the fact that it is the end of the season,” as Davidenko put it. “This certainly counts for Megias, but this also counts for the rest of the team that has worked hard during the last season and eventually gets the chance to race for themselves and present themselves.”

The Tour of Hainan starts on Sunday in the historic part of the city Chengmai. The first stage is 110.7km and therefore the shortest of the entire event. The nine stages will basically surround the island clockwise. The longest stage will lead from Wanning to Sanya on Thursday. The final will be on Monday, October 28th and will be 148km from Danzhou back to Chengmai. The team will face very strong competitors, such as the ProTeam Belkin with the favorit Lars Boom from the Netherlands. “The world’s first all-diabetes professional cycling team has proved this year that it is capable of racing successfully on the highest level. We are looking forward to the challenge in Hainan,” said Davidenko.

Lineup of Team Novo Nordisk for the Tour of Hainan 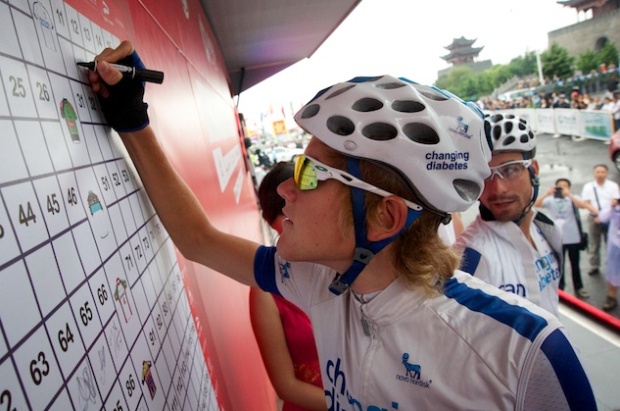