The New Astana BePink Scores a First in Costa Rica

BPeople saddles with the girls on the juggernaut led by Walter Zini.

On Saturday, March 1st, Alena Amialiusik, the Belorussian rider for Astana BePink, dominated in the most difficult stage of the Vuelta Internacional Femenina in Costa Rica. The team managed by Walter Zini is already close to its biggest achievement, with Anna Stricker taking second place in the third stage and third in the last stage. Amialiusik‘s win marks the team’s first season victory. Alena owned the 4th stage in the Vuelta a Costa Rica, which was 84.1 km from Heredia to Grecia. She set the pace for a small group of adversaries in the final sprint. Amialiusik went on to claim third place on the podium for the short Costa Rican stage race.

With their the MX Air model, BPeople saddles has been supporting the girls from Astana BePink during their adventures along the roads all over the world.

“This victory gives us confidence and boosts our morale. Alena was in great form; she put her companions to work with less than 10km to go from the uphill finish line,” explains Sigrid Corneo, DS for Astana BePink in Costa Rica. “Following a great job by Dalia Muccioli and Doris Schweizer, the break got caught with less than 3km to go. Then Alena did a fantastic job in controlling attacks by her adversaries, arriving first, with her arms raised, over the finish line in Grecia. However, Doris Schweizer and Susanna Zorzi were also remarkable, closing out the stage with the same time as Alena’s”.

BPeople is all smiles, and would like to thank the entire Astana BePink Women Team for this splendid victory, hoping that the entire season may be full of successes…as always, signed by BPeople. 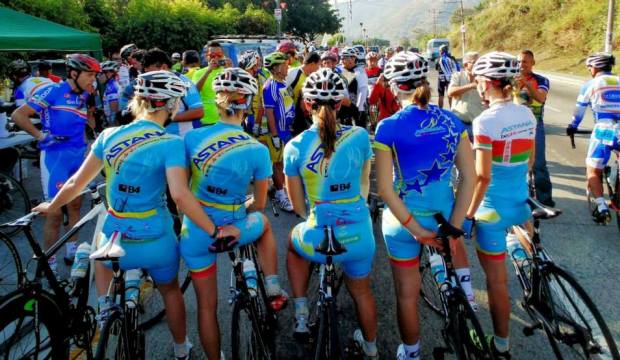 RusVelo in Belgium: one step at a time

City of Albany Returns to Host the Southeast Regional Series