The numbers behind the scenes for LAMPRE-MERIDA

Twenty one stages, it’s hard for a cyclists to complete them all.

It’s not even simpler the internal organization of a World Tour team as LAMPRE-MERIDA is to guarantee the necessary support for the athletes in a great tour.

Auto vehicles crew that LAMPRE-MERIDA had in the Pink Race had 1 bus, 1 truck, 2 vans and 5 cars (in photo Bettini, a team car during the race).

They travelled a lot, covering many kilometers: as example, a team car covered during Giro 6000 km, the same distance from Milano to Tashkent, Uzbekistan.

On the team truck 56 Merida bikes were stored: for each cyclist there were 2 Reacto Evo frames, 2 Scultura frames, 2 TT Warp frames. For Scarponi and Niemiec, one additional Scultura frame.

The wheel that the mechanics had set before the start were 75, all with tyres, in addition to which there were 90 additional tyres.

Mechanics used also 40 boxes of brake pads and 50 chains, each of 135 cm of length for a total of 67,5 meters.
Auto vehicles, bikes and mechanic parts were clean and shining thanks to washing liquid Chante Clair: 100 bottles bot empty during Giro.

Masseurs prepared sandwiches using 470 meters of aluminum foil and they used 2000 bottles, for a total of 100 lt of liquid, large part of which was hot tea.

Cycling fans had the opportunity to follow LAMPRE-MERIDA in Giro d’Italia thanks to 170 tweets that were published on the twitter profile (@lampre_merida, 10.600 followers) and 170 posts on team’s facebook profile (10.800 followers). 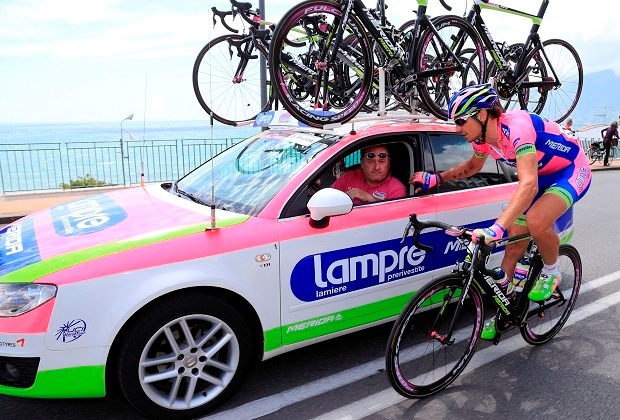 Giro di Pez: The Week After