HotChillee, Annecy, 12th September 2013 – At 7.15am riders of the Alpine Challenge gathered at the Rider Village on Lake Annecy for the start of the final event in HotChillee’s Global Event Series 2013. With threatening rain clouds overhead, the mood was one of nervous excitement. First on the agenda was The Prologue, setting the scene for the next few days of alpine cycling by taking the riders 844 metres up and into the mountains surrounding Annecy. Riders’ Prologue times seeded them into four Speed Groups, for the next three stages.

Speaking before the start, John Driver, who rode the Cape Rouleur this year and has previously ridden in The London-Paris said: “I’m apprehensive, but excited. This is my first time riding in the Alps. I did the Cape Rouleur this year and really enjoyed the climbing so the Alpine Challenge seemed like a good option, especially as everything is taken care of. It’s also great to ride in a safe environment with rolling road closures and a full support crew. It’s great to be able to just get on with enjoying the riding.” 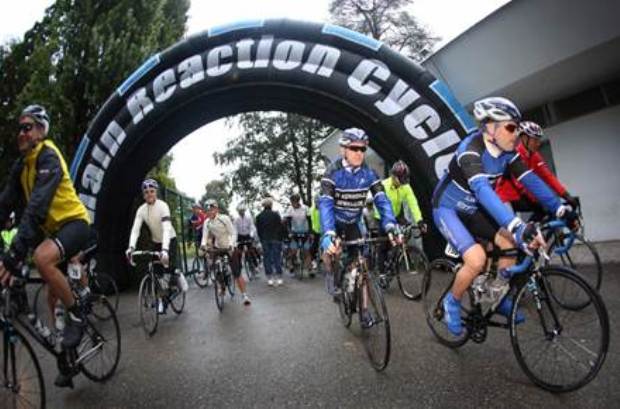 Leaving the Riders Village for the start of The Prologue

Cycling out of the Rider Village, it was uphill from the start-line. Riders were guided by the Lead Cars and motorbike outriders up Col de la Forclaz, a climb that has featured in the Tour de France. The rain came down as the riders went up into the clouds. This year’s Prologue was a harder route than last year, with a long, steep climb. The race favourite, 19-year-old Chain Reaction Cycles supported rider, Felix Barker completed the Timed Climb Section in the fastest time (25 minutes 11 seconds), followed by Dave Dent (27 minutes 19 seconds) and Joe Luckett (28 minutes 55 seconds). The fastest lady was Jenny Foreman (29 minutes 03 seconds), who started Stage One in the Pink Jersey. Team Chain Reaction Cycles took the lead into Stage One in the Best Team category. All riders battling both the elements and the incline made it to the summit and were met with beautiful views of Lake Annecy.

Speaking from the summit of Col de la Forclaz, Felix said: “That was quite dramatic, with the weather setting the tone. As one of the faster riders, I started towards the back and stuck with another rider until about half-way up. As it got steeper, I decided to push on. Having riders to chase down was motivating, but it was very tough.” Felix started Stage One in the Red Jersey. 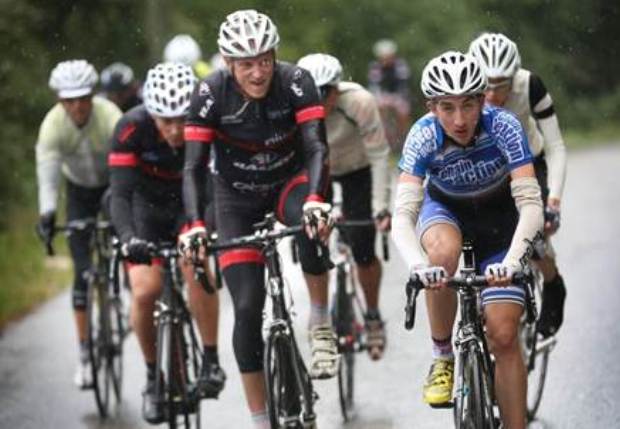 Another inspirational rider, Anna Harris, from Sweden said: “That was probably one of the hardest things I’ve done and I’m happy to be at the top now. I’m not thinking about what’s next, but that’s hopefully the worst part done.” Anna started cycling a year ago and has since done The London-Paris and is signed up to the Cape Rouleur 2014.

After a rest stop at the summit where riders were told which Speed Group they will be in for the next three stages, it was back down the Col, towards the lake. As the route swept along the shores of the lake, the sun shone through the cloudy skies. From the lake it was up into the mountains on the other side, through the town of Bredannaz. The long climb through St Eustasche had many tributes to the Tour de France on the side of the road, reminding riders they were following in the wheels of cycling’s greats. A welcome descent followed, bringing the riders to the lunch stop. 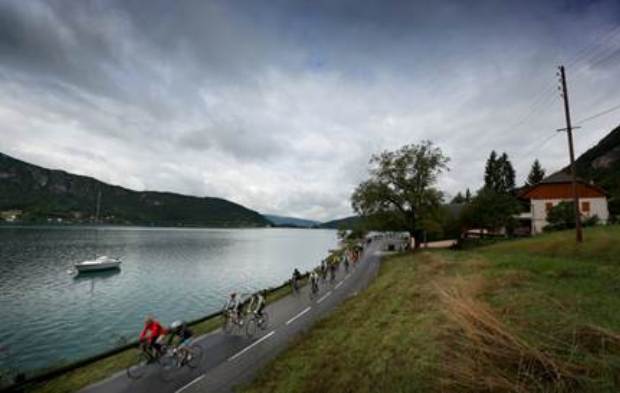 Stage One took riders back down Col de la Forclaz, round the lake to the mountains on the other side

After some much needed rest, refuelled and rehydrated, the riders were on their way to Stage One’s Timed Climb Section. It was an undulating 27kms to the start of the Timed Climb, rolling through green fields. Cows in the road managed to split Group Two into two pelotons, but they regrouped in time for the race section.

Forêt de Quintal, the final climb in the 100th edition of the Tour de France this year and the one that saw Movistar’s Nairo Quintana secure his podium position, was the host of Stage One’s Timed Climb Section. A sharp 350 metre climb over 3.5kms that proved a test for even the best of the climbers. The climbing into Quintal began almost 10kms before the start of the flagged section, setting riders legs up for the challenge. In the men’s race, Felix Barker retained his lead, extending it by a further minute. He will start Stage Two in the Red Jersey. The ladies race is a close-fought one between Kara Chesworth and Jenny Foreman. Kara crossed the finish first, but Jenny managed to keep a 30 seconds lead.

After the Timed Climb Section, when asked how she felt, Jenny said: “Wet, but then we’re British and used to it. During the Prologue I attacked and Kara was on my back the whole way. This time round I tried to stay with Jenny, but couldn’t quite hold on. It was tough, but good. These mountains are different from any cycling I’ve done before.”

Tomorrow riders will tackle Stage Two of the Alpine Challenge 2013, taking on Col de Bluffy and Col des Aravis over 112.9kms with a total ascent of 2201m.