‘Heat Was Much More Of A Factor Than The Wind’ At UCI World Time Trial Championships.

Racing in 93-degree (Fahrenheit) heat, Powless was one of the earlier starters in the 28.9-kilometer race. The best young rider at the Amgen Tour of California started slowly, gradually ramping up his speed on his Specialized Shiv time trial bike. The 20-year-old from Roseville, California, had the 11th fastest time at the first intermediate check, was 12th at the second and eighth through the third. He finished 54 seconds off the winning time. 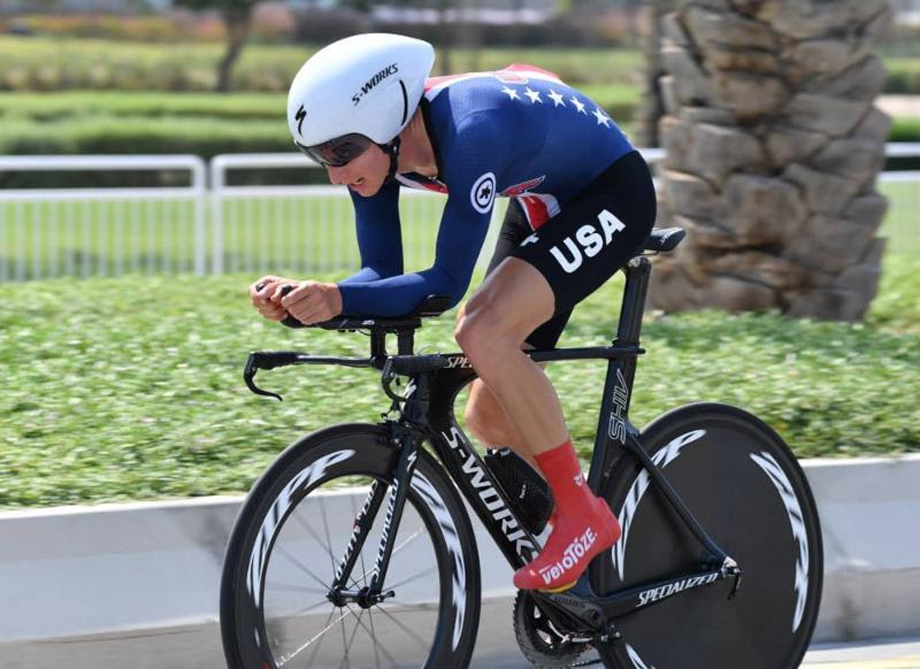 “The heat was much more of a factor than the wind,” Powless said. “There were a few headwind sections on the course. But overall, it seems like the heat was getting to people a lot more. It almost seemed like racing at altitude – but instead of your lungs burning, the rest of your body was overheating. I started out at a pace I figured I could hold for an event that long. But after five or six minutes, I knew I would have to back it down. I did not want to push myself over the edge too soon and not be able to recover. So I tried to build into the race.”

Winner of individual time trials at the Tour de Beauce and the Redlands Bicycle Classic this year, Powless called the more-than-35-minute effort “the most challenging” time trial he has ever raced.

“It was a lot of inner struggle during the race,” he said. “At first, I was frustrated that I felt I had to back off my initial pace. But I think it actually paid off in the end. I was able to build into the race more. I started to think more about speed over power and only checked my power meter to make sure I was riding steady. I am confident that I rode as good of a race as I was capable of riding. There was nothing left at the line.”

Marco Mathis, the second rider of 74 to start, led a 1-2-4 finish by Germany with a winning time of 34:08. Fellow countryman Maximilian Schachmann was runner-up, 18 seconds back, while Australian Miles Scotson took the bronze, 37 seconds behind and five seconds ahead of German Lennard Kämna.

“Having Neilson ahead of me helped with the heat management,” Curran said. “He told how it built up, even though it felt fine at the beginning. The heat was still tough, but I used a lot more ice to keep cool before the start and in the beginning of the time trial. It cooled down a bit, but was windier when I went. Time trials are run over a course of time, so changing elements are a natural part of the course.”

Dunbar earned his top 10 result by overcoming a slow start that saw him 22nd at the first time check. He was 1:21 back of the winning mark.

“The course was pan flat, not ideal for a rider of my build,” Dunbar told the Irish Cycling Federation after the race. “But sometimes you have to go fast on the flat too. I am really happy with the race. Myself and (Irish national technical director) Brian Nugent had a strategy in place and it really helped. I rode kind of on feel, but looking at cadence and power as well. I got some good advice from people, and I used that in the race.”

‘Like Riding Into A Hair Dryer’
Dunbar said he did everything he could to prepare for the intense heat, including training in warm weather clothing at the team’s training camp in Majorca. But it still didn’t help him prepare for what he faced Monday.

“Racing in that kind of heat was like nothing I have ever done before,” he said. “I felt good after five minutes, I had settled in nicely. But once I turned into the headwind it was like riding into a hair dryer.”

Two other Axeon Hagens Berman riders also competed in Doha. Tao Geoghegan Hart finished 26th for Great Britain while Krists Neilands was 46th for Latvia. In a comparison of trade team performances, no other Under 23 squad besides Axeon Hagens Berman placed three riders in the top 10 Monday.

Road Race On Thursday
All five Axeon Hagens Berman riders will compete Thursday in the Under 23 road race, along with three other Americans: Greg Daniel, Colin Joyce and Justin Oien.

“For Thursday, we have to be opportunistic and precise to do well,” Curran said. “In the heat, you can’t make the repeated moves and still be there at the end. With that in mind, we can do well so long as we play our strengths at the right times.”