Tom Dumoulin Back Riding After Car Accident Two Months Ago

Dutch pro road racer Tom Dumoulin is riding again, just two months after being hit by a car. The former world time trial champion suffered a broken wrist after being felled by the moving vehicle near his home in Holland in September and has since undergone a surgical procedure to repair the fracture.

He was unable to participate in the World Championships time trial in Belgium and has been keeping a low profile. However, he was spotted riding with the amateur Tour de Tietema Cycling Team before visiting a local bike shop.  Dumoulin is now reported to be preparing for the 2022 season with Team Jumbo-Visma and sports betting sites will be especially interested in his competitive return.
The 30-year-old only raced 19 days this year, having opted to take some time away for an indefinite period while at training camp with Jumbo-Visma in January. He spent time thinking about what he wanted for the future and even mulled over a possible retirement. He claimed to be feeling like a backpack of 100 kilos had slipped off of his shoulders back then.

“I was very ready to say: ‘Ok this is it.’ If that was it, I would have been a very happy guy looking back on a great career,” he told ESPN in August. “It [my career] wasn’t as long as some other riders but I was very happy with what I achieved. It was not only a period to be happy about what I achieved but also to be a happy person again. That was way more important at the time. That’s actually always way more important.”

He decided to return to the sport after a visit to the Amstel Gold Race in the spring, choosing to make the comeback in the Tour de Suisse in June to prepare for the time trial at the Tokyo Olympics, where he won a silver medal behind Jumbo-Visma teammate Primoz Roglic. He rode the Benelux Tour before the untimely collision that left him requiring an operation. 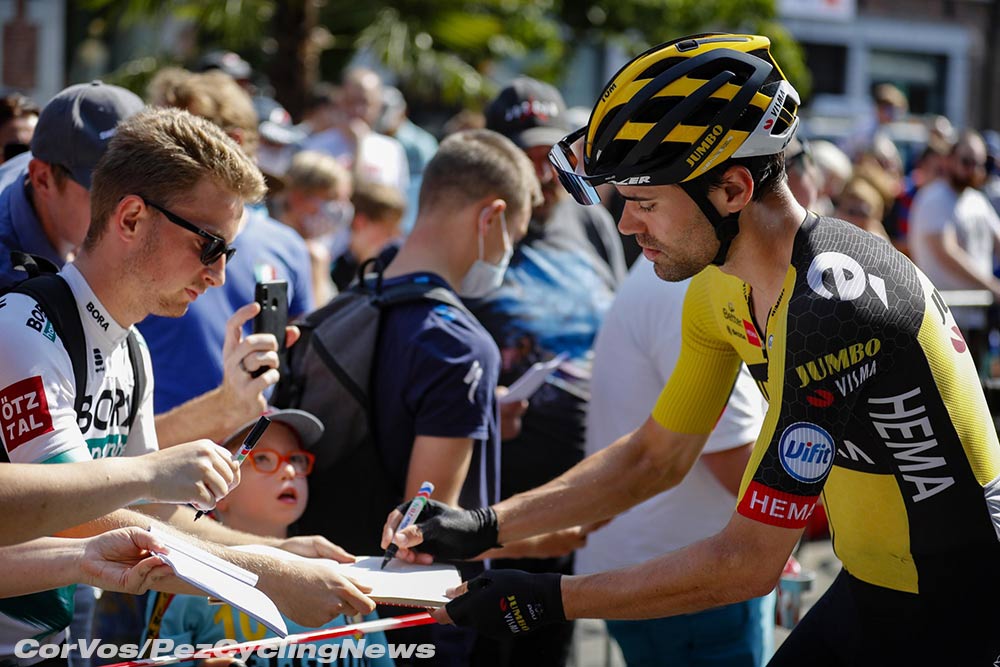 The Dutchman will remain with Jumbo-Visma for 2022 but he has been linked to Australian outfit Team BikeExchange for 2023 as he has good relations with the team’s new bike sponsor Giant. The team confirmed Dumoulin was among the riders they were considering late last month but insisted the decision isn’t one they will be making any time soon.

“Tom Dumoulin is a rider that’s on the market at the end of next year and he is a rider that most teams would like to have on board if he performs like he did at the Olympics, for example,” the team’s general manager Brent Copeland told Cyclingnews.

It was also reported by French publication L’Equipe that the rider could sever ties with his current team and make the switch to BikeExchange for 2022. Sources have suggested the move won’t be happening in the near future but there are discussions over a potential signing once his contract with Jumbo-Visma is up at the end of the 2022 season.

“If he’s wanting to carry on with GC ambitions it is definitely a rider that we would sit down and say, ‘okay, is this someone that we could bring on board for the future and work with’. He has still got a good couple of years ahead of him, so those discussions are ongoing all the time,” Copeland added.

BikeExchange is in need of strong riders after losing Adam Yates to Ineos Grenadiers and Jack Haig to Bahrain Victorious. They’ve been heavily reliant on Simon Yates this season – Yates came third in the 2021 Giro d’Italia on the back of winning the Tour of the Alps.

Dumoulin, who won the Giro d’Italia in 2017, came second in the 2018 Tour de France and seventh overall in 2020 while supporting Roglic to 17. He also finished second in 2016 after winning two stages.

The cyclist, known for his excellence in time trials, has also developed a reputation as a climbing specialist. His win in the 2017 Giro d’Italia saw him become the first Dutchman to win the event and was also the first of his nation to win the World individual men’s time trial Championships in the same year. He took second place in the Giro d’Italia in 2018.

Meanwhile, Jumbo-Visma has signed former world time trial champion Rohan Dennis for 2022 and 2023, having given Dumoulin the option of deciding his own race program and goals.

It does appear that he will be fit and ready for the upcoming 2022 season.