Top Regional Teams Confirmed for May at Southeast Regional Series in Albany, Georgia

2014 marks the second year for the Southeast Regional Series presented by Stan’s NoTubes (SRS). This is the only road racing series for amateur and elite cycling teams which offers points competitions spanning multiple states in one region. SRS returns to Albany, Georgia the weekend of May 17-18, and top teams from the southeast are confirmed to participate in the Begin, Believe, Become Albany Criterium & Road Race.

Strong competition in Albany in the Men’s Pro/Cat 1 /2 will come from High Country Devo powered by Pactimo (Boone, Tenn.), Stan’s NoTubes powered by Proferrin (Greenville, S.C.), and UnitedHealthcare of Georgia powered by 706 Project (Athens, Ga.). Also confirmed to race deep in the heart of Dixie in the first of five regional series events for the men’s categories are Friends of the Great Smokies (FGS Cycling, based in Knoxville, Tenn.) and Cyclus Sports (Greensboro, N.C.). 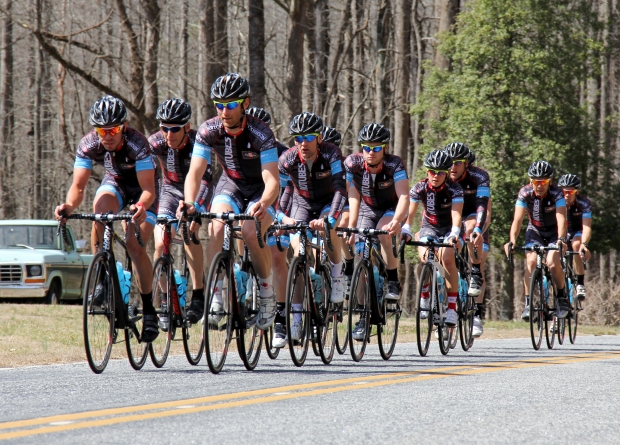 On the women’s side in the Pro/Cat 1/2/3 category, Arden Stelly, who is from Americus, Ga., swept both Albany races for her Pain Pathways (Asheville, N.C.) squad. On March 2, 2014 she continued her winning ways with the top spot in the road race of the Greenville Spring Series.

Look for Team PCP (Albany, Ga.) in 2014 to bring a large number of competitors for the women’s races, as well as men’s Cat 4, Cat 5 and Masters divisions. “It is great to see amateur teams racing together and using solid race tactics with squads as large as five or more riders,” said Marilyn Cullinane, Series Director Marilyn Cullinane, who also owns Start Smart Cycling out of Greenville, S.C. “SRS is unique in that the series gets strong teams in all divisions, from the pro race to Cat 4s and Cat 5s. This is what sets this event apart from other races.”

Team PCP, Pecan City Pedalers bicycle club, is the only USAC-licensed cycling team based in Albany, Ga. and has a regional roster from three states. The Pecan City Pedalers have been the major bicycle club in Southwest Georgia for close to 30 years, sponsoring the Nut Roll Century, held annually in mid-September, and supporting the Albany SRS race weekend.

“We are proud of our team’s affiliation with the Southeast Racing Series. With Albany being the home of the Marine Corp Logistics Base, the race has been a great way for our club to get to know Marines and their families while stationed here,” said Chip Battle, current Vice President of the Pecan City Pedalers. “Most of our members are 50-plus years of age, but the team has been successful at attracting younger riders, as well as women, to our cycling community. We are especially proud of our sponsorship and the success of the Elite Women’s squad.”

Battle noted that it was 10 years ago that the Albany Convention and Visitors Bureau asked for assistance in developing a cycling event to promote downtown Albany. He and Team PCP are now very involved in recruiting experienced volunteers for the criterium and road race. The team also helps promote this growing event as a great weekend event for racers and spectators.

Albany is the first of five SRS events, a USA Cycling Regional Road Championship Series. SRS aims to attract elite level riders and teams throughout the Southeast. The series is managed by Start Smart Cycling. The SRS not only offers points and prizes at each weekend series, but offers award jerseys created by Hincapie Sportswear in three categories for both pro men and women: SRS Overall Champion’s jersey, the green- and- white-striped PEZ Cycling News Sprinter’s Jersey, and the Stan’s NoTubes King of the Mountain/Queen of the Mountain jersey.

Teams and individuals can now register for the full series, or individual races. Racers are encouraged to register before fields close on May 16 for the Begin, Believe, Become Albany Criterium & Road Race. Registration information, the complete SRS schedule and event updates are available online at www.srs-racing.com/. Follow the event on Facebook (SoutheastRegionalSeries) and Twitter (SRSChampions).