– For the first time in my career I won a race in general classification. That’s great! I am especially happy to win here in my home city of Stavanger. This is a very important success for me. I was motivated to win the Tour des Fjords, but the race was really hard and unpredictable. I am happy that our Team Katusha managed to turn the race and to tip the scales in our favor, – said Alexander Kristoff.

The fifth stage of 171,2 km started in Risavika and finished in Stavanger. Team Katusha did a very smart and strong race – during the entire stage the team controlled the race, protecting its leader. In the final Katusha’s riders did everything to catch the break and to provide to Kristoff a good position in the last kilometers for his sprint. The final 1,5 km were characterized by a number of strong attacks. The final powerful attack came from Nikolay Trusov from Tinkoff-Saxo. But Alexander Kristoff did a really strong sprint and overcame Trusov to take the win at the 5th stage. Third place went to Tom Van Asbroeck from Topsport-Vlaanderen.

– The team did a very good stage, and I want to thank all my teammates for the help, both today and during the whole race. I was able to taste this success thanks to the support provided to me by the team. For me Tour des Fjords became a good possibility to check my condition for the main start of the season – Tour de France. I think that my preparation is in the right direction. After Tour des Fjords I will have a short break, and my next race is Tour de Suisse, – added Alexander Kristoff.

After the 5th stage Alexander Kristoff held 10 seconds to Magnus Cort Nielsen from Cult Energy Vital Water and won the final general classification of the race. Magnus Cort became the runner-up at 1 second behind the winner. Jérôme Baugnies from Wanty is third (+0.09).

– We had a hard task before the stage to win 9 seconds. We knew we had to try to win the stage and not allow to the overall leader to get any bonus seconds. We tried to play tactically and we did it. We are more than happy how this week at the Tour des Fjords has unfolded. We won 3 stages, took the overall win and the green jersey of the best sprinter. The team became a key for Alexander’s success. Each rider worked hard at 100% every day to get this common victory. I am proud for our riders, and I am happy for Alexander, who proved again to be one of the best sprinters in the peloton, – said sports director of Team Katusha Torsten Schmidt.

Alexander Kristoff became the winner of the points classification, taking the green jersey.

Today’s overall success of Alexander Kristoff became the 12th victory for the Team Katusha in the season. 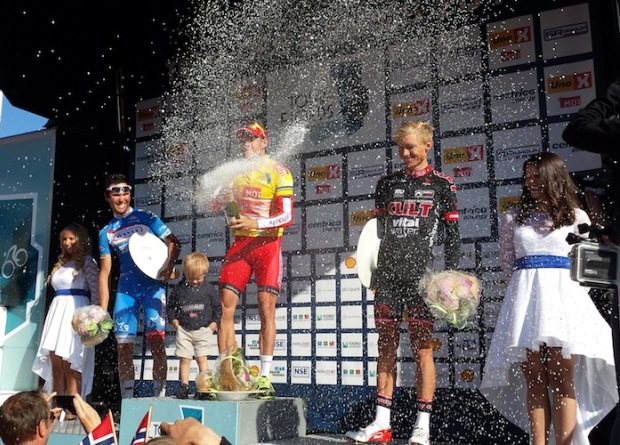