Many of the biggest stage racers and top contenders for the Grand Tours will collide tomorrow on stage three of Volta a Catalunya. It’s also the 2014 season premiere of Contador versus Froome when the riders hit the cat. 1 climb to la Molina.

“Tinkoff-Saxo will decide on the team’s podium ambitions when the riders hit the last climb to Molina”. Such are the words from Tinkoff-Saxo’s sport director Philippe Mauduit, before the big stage three in Volta Ciclista a Catalunya.

– There is no pressure on Alberto tomorrow. He did a fantastic job in Tirreno, and he doesn’t have to push himself too much at this point in the season. For sure, tomorrow will be interesting, but it’s also very unpredictable because of bad weather. And also shape-wise, nobody knows how the competitors are feeling, so we’ll wait and see until the climb, says Philippe Mauduit.

But the French DS agrees that the stage tomorrow and the final climb to la Molina can be an excellent battleground for the favorites to fight it out.

– Alberto, Froome, Purito, Quintana are here. It’s the top 4 from the Tour last year. And many others will be in the fight for the win as well. If the favorites feel good and want to challenge each other, it could be an amazing stage, explains Mauduit after the finish of stage 2 of Volta a Catalunya.

A wet day in the front of the peloton
Tinkoff-Saxo maintained a good position in the peloton during the main part of today’s 2. stage. Even though the active riding left the team exposed to wind and rain it proved to be a good idea.

– We avoided the crashes and had no problems on today’s stage. If you’re active in the front, of course you use more energy than in the middle of the peloton but you stay safe and if the peloton splits you don’t lose time. When the captain’s name is Alberto Contador and the team is among the favorites to the overall win, you don’t want to fool around. So we take charge and stay safe, finishes Philippe Mauduit. 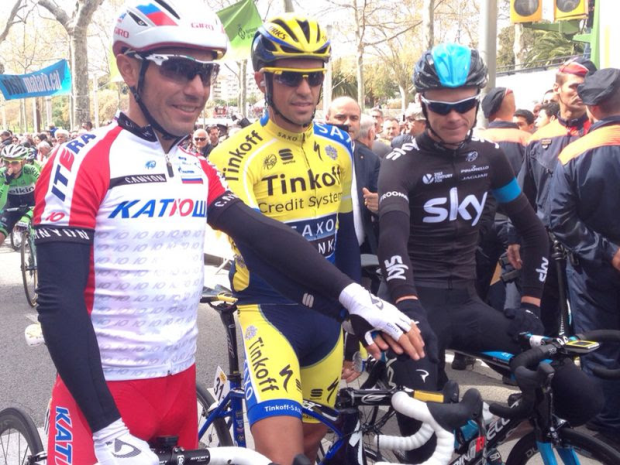