Stephen Roche is one of just two cyclists ever to achieve the Triple Crown of Cycling: winning the Tour, the Giro and the World Championship in one year. On May 18, the Irishman will join 5,000 cyclists from over 70 countries and 48 US States in cycling 100 miles at the 4th annual Campagnolo Gran Fondo New York (GFNY).

Stephen Roche’s attendance at Campagnolo Gran Fondo New York isn’t just an extraordinary experience for the race’s participants. GFNY’s CEO, Uli Fluhme, is also very excited. “I scored Stephen’s autograph as a 16-year old cycling fan”, says Fluhme. “He was my hero. It’s really cool to have him at our race, some 25 years later.”

In addition to Roche’s presence at GFNY, representatives from Stephen Roche Cycling Holidays & Training Camps will be exhibiting at NYC Bike Expo and promoting Roche’s cycling camps in Mallorca, Spain. The camps provide cyclists of all ages and levels of ability with fully guided cycling holidays that are supported by a professional team of staff. The Stephen Roche cycling camps are held in two sessions, in the spring and fall, and provide an exceptional level of customer service and a quality cycling holiday to each guest.

“I’m very pleased to come to New York to take part in Campagnolo Gran Fondo New York and NYC Bike Expo. I’m looking forward to the challenging 100-mile course and meeting cyclists from around the world on May 18th.” says Stephen Roche.

About Gran Fondo New York
At the 4th annual Campagnolo Gran Fondo New York the world’s most international peloton with riders from over 70 countries and 48 US states will take on a challenging 100-mile route from NYC to Bear Mountain and back to compete against each other, the clock and themselves in a personal endurance challenge. The 50-mile GFNY BEAR on the same day is a non-competitive ride from NYC to Bear Mountain, to celebrate the park’s 100th anniversary. Gran Fondo racing stems from Italy, where these amateur cycling events take place nearly every weekend throughout Italy giving the cyclists a chance to test and prove themselves on two wheels. Gran Fondo New York raises funds for Operation Smile, the international children’s medical charity. The official Grand Fondo New York website is: www.granfondony.com. 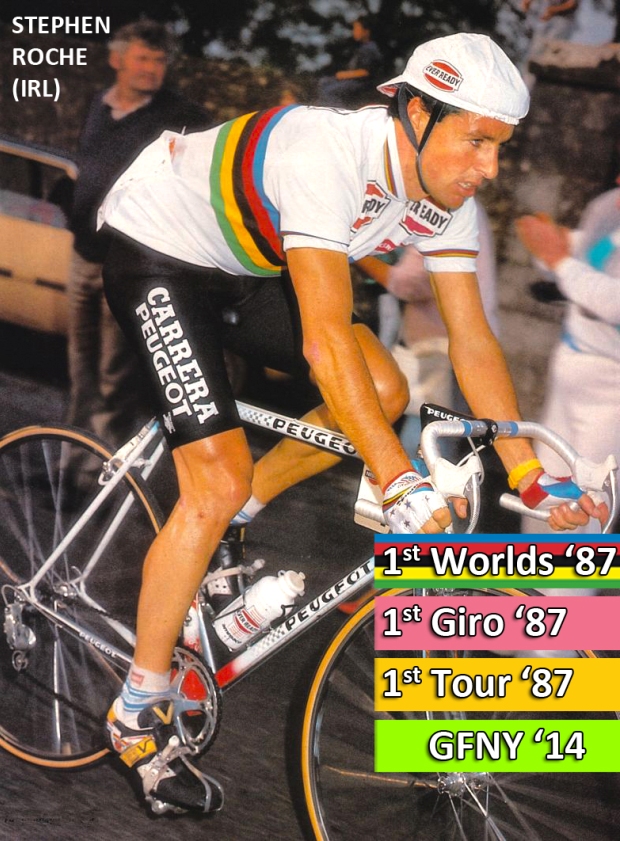