BC Superweek is pleased to announce that the international governing body of cycling, Union Cycliste International (UCI), has officially upgraded the 2014 Women’s White Spot | Delta Road Race to a 1.2 UCI sanctioned event.

“The Corporation of Delta is very excited to have the Women’s White Spot | Delta Road Race become a UCI 1.2 sanctioned event and join the men’s race on the international cycling calendar,” said Corporation of Delta Mayor Lois E. Jackson. “Delta is a community that encourages active healthy living and fair play, therefore, the inclusion of the women’s race was a natural step for us to support.”

“As the title sponsor for the Delta Road Race, we’re happy to support the growth of women’s cycling in British Columbia and Canada with the inclusion of the 2014 race on the UCI calendar,” said White Spot President & CEO Warren Erhart. “It’s an honour to be a part of the Delta Road Race since its first year in 2001 and to see it become an internationally recognized event.”

With international sanctioning and awarding of official UCI points, the road race will draw a deeper, stronger field of top professional cyclists from all over the world to the already well attended three event Tour de Delta and the rest of the nine race BC Superweek series to be held in July 2014.

“The Tour de Delta, along with all BC Superweek events, are committed to enhance the sport of cycling and provide the opportunity for local athletes to compete against some of the best athletes in North America and the world,” added White Spot | Delta Road Race Director Mark Ernsting. “With the inclusion of the women’s race into the UCI calendar, this adds significant profile to the Tour de Delta and overall series of BC Superweek.”

In addition to top professionals, Ernsting expects more national teams to take part in an effort to earn UCI points, which are used to determine the number of entries each country gets into events like the World Championships and Olympics. Canada is among those expected to field a team.

Developing the sport of cycling, for men and women, was the goal of the Tour de Delta when it started in 2001. Since then, several local riders have used strong showings at it and other BC Superweek races to launch their professional cycling careers, earning contracts with top North American teams by impressing the managers and directors that come each year to compete and find new talent.

Having UCI status should take that exposure and the competition level up a notch.

“This sanctioning provides local teams – both athletes and Team Directors – the chance to experience what a UCI race entails,” Ernsting adds. “This goes back to the reason why Delta wanted to get involved… to give people in our local communities the chance to grow within the sport… so that they can advance to the next level of racing.”

“Cycling Canada is extremely pleased to see the White Spot | Delta Road race for women has now been upgraded to UCI sanctioned event,” said John Tolkamp, President of Cycling Canada. “This is a tremendous development for women’s cycling and we thank all the supporters of the Delta Road Race for making a significant commitment and investment in supporting the growth of women’s cycling in Canada and North America.”

“It’s a wonderful opportunity for riders not only in our local community, but internationally, and we are so fortunate to have the chance to build on the success of the men’s race with the introduction in 2014 of a women’s UCI 1.2 race,” said Richard Wooles, Executive Director of Cycling BC. “We thank everyone who made this possible as it will have an impact on everyone from sponsors and spectators, to international-level local riders who have a chance to race at an event of this calibre at home.”

“Cycling is definitely one of the most popular outdoor activities in Canada and its popularity is growing at an exciting rate, that’s why I’m thrilled that the Delta Road Race has become a UCI event for 2014,” BC Superweek Ambassador Lex Albrecht exclaimed. “This new classification has positive repercussions for women’s cycling, riders who represent Canada internationally, and for BC Superweek.”

A member of Team NOW and Novartis for MS, Albrecht won the Tour de Delta Criterium and the Tour de White Rock Hill Climb in 2013.

“The UCI status will attract teams and riders from around the world, and gives Canada, BC, and the Lower Mainland a chance to shine on an international level,” continued Albrecht. “Presently, the majority of UCI races are in Europe, which makes accessing points difficult for riders who focus on the North American race circuit. The White Spot | Delta Road Race now brings an opportunity for Canadian riders to score points on home soil.”

BC Superweek is Canada’s biggest cycling series, with $110,000 in prize money available during nine races over 10 days. 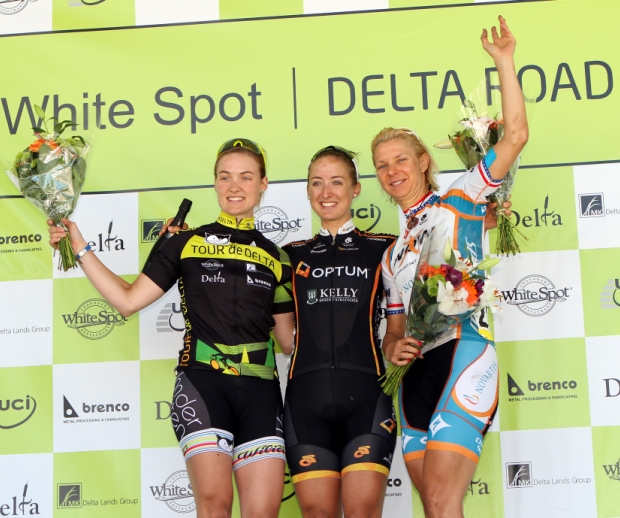