Tour de France 2014 : The Peloton on TV and the TV Inside the Peloton

TV viewers will feel like being in the middle of the peloton of the Tour de France with revamped graphics, improved air relay and on-board cameras on bicycles this year. The race will be even better to watch!

Ten stages with full live coverage, 90 hours in total
The 2014 Tour de France will be broadcasted more than the previous one hundred editions of the race as ten stages will be seen in full, which is one more than last year. Ninety hours of live coverage will be supplied to the broadcasters, including the three English stages with an exceptional programming on ITV, simultaneously on ITV1 (UK’s number 2 TV channel) and ITV4.

More precise information
TV viewers will have access to more relevant information thanks to revamped graphics in the live footage. For instance, the slope’s gradient will appear during mountain stages. In other circumstances, the strength and direction of the wind will be visible on screen, as well as the instant measure of the riders’ speed. Coming close to the finishing line, the remaining distance will be calculated every hundred meters and the maximum speed of the sprinters will be timed by radar. Riders’ positions will also be tracked by satellite throughout the race.

Inside the peloton…
Onboard cameras are commonly used in motor sports. They’ll make their debut at the Tour de France in a trial over three weeks of racing. Every day, four riders from two different teams will carry an ultra-light camera. They’ll turn it on themselves as they’ll approach the key moments of the race. After each stage, a video will be edited, published on letour.fr and available for team’s websites and broadcasters.

Still 190 countries and new conquests
The Tour de France has been broadcasted worldwide on five continents and seen in 190 countries for several years but the airing keeps improving. For the first time, English speaking Canadians will be able to watch the Tour on a national sport channel, Sportsnet, as well as major stages on free network Citytv. In Wales, the performances of local hero Geraint Thomas will be commented live in Welsh language on public channel S4C. 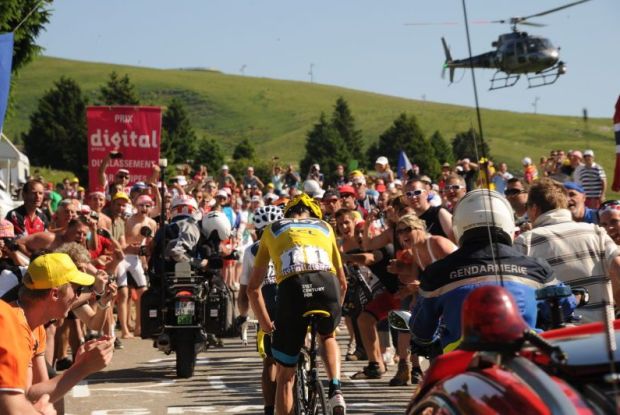