After the race’s second and final rest day – a chance for the guys to reflect on another stage win and a large buffer in the green jersey contest – the Tour roads turned upwards for the final five day’s racing. Green was all but sewn up, but a few big days lay ahead for Rafal Majka in his quest for a second King of the Mountains jersey, and he got straight to work after hitting the road again.

Stage 17 took riders over three categorised climbs before a final ascent up Finhaut-Emosson, covering 10.4km at an average of 8.4% – a big opportunity to rack up some serious climbing points. Being in the breakaway was key, and with an amazing support role from Peter, Rafal was able to achieve this and set about finishing first over the first three climbs. On the final ascent, the day’s large breakaway was whittled down to just three, with Rafal moving clear in the hunt for a stage win. The battle for the breakaway and the points earned over the stage started to take their toll however and Rafal had to set his own pace to the line, finishing third but adding a huge 83-point buffer over second place. 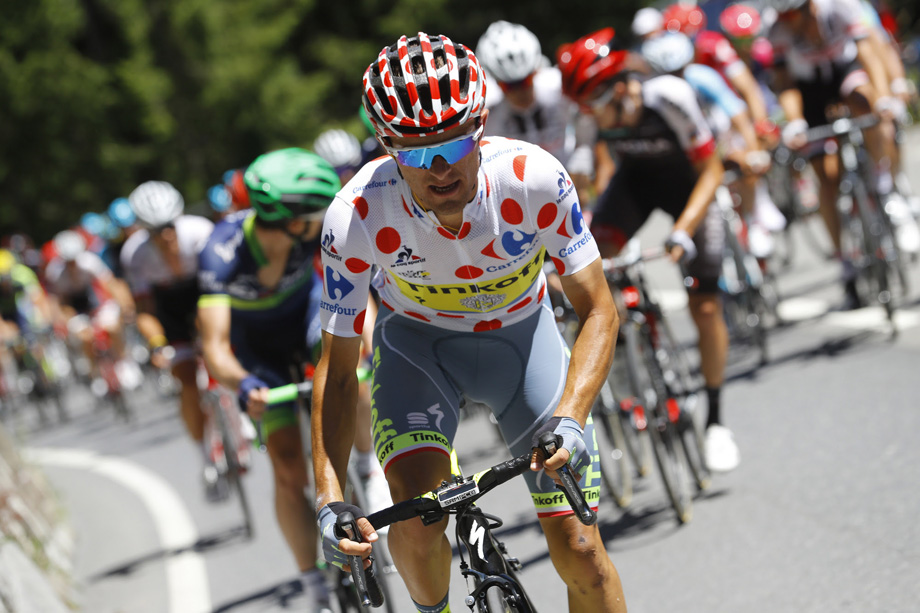 Rafal Majka on the attack on stage 17, a big day for KOM points. Photo by Bettini Photo

The following day was the race’s final time trial, a hilly 17km effort that took in a bit of everything over its profile. It was a pure GC day for the team, with Roman Kreuziger putting in a strong ride to finish 13th on the stage and maintain his position just outside of the top 10.

After his points spree two days previous, Rafal only had to keep an eye on those around him in the mountains classification until Paris. Following a large move on the first climb of the race, Rafal once again found himself up the road and picked up points on each of the day’s climbs before eventually dropping back ahead of the final climb to the finish. Riders were fighting to stay upright as well as against each other after testing rain conditions make for treacherous racing, and unfortunately Roman suffered, losing some time to those around him on GC. There was still one chance to propel himself up before Paris though, and Roman wasn’t going to let this pass him by. 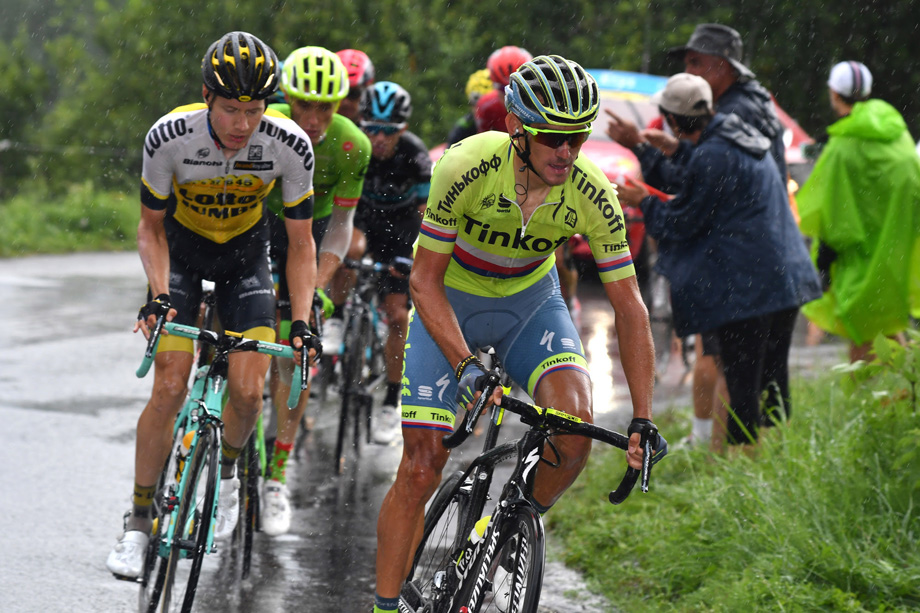 Roman Kreuziger racing through tough conditions in the last days of the race. Photo by Bettini Photo

Come Stage 20, Roman had over two minutes’ gap to make up if he was going to crack the top 10, but after getting himself into the day’s main breakaway, he set about putting in a strong ride to gain time over those around him. Negotiating difficult, wet conditions, Roman raced to sixth spot on the day, after cresting the final climb of the Joux Plane in the same position, and in doing so moved himself into tenth spot on GC. His efforts may not have been possible had Peter not been present in the day;s breakaway to give a heavy helping hand – yet another show of strength from the green jersey.

With all of the climbs over and done with, all that Rafal and Peter had to do was to finish safely in Paris to reap the final reward for their hard work in the points and mountains classifications. The final leg into Paris also presented one last shot at glory for Peter and the team, and after an initial procession and then an increase in pace on the Champs Élysées, the race was set for one final bunch sprint. Opening his effort slightly late, Peter crossed the line in a close second place, rounding out a hugely successful Tour de France for the team. As a testament to his fighting spirit over the three weeks of racing, Peter was also awarded the accolade of most aggressive rider of the race, something to cement the grit and determination the UCI world champion shows in every pedal stroke.

Peter’s strong ride crowned a great edition of the Tour for himself. “The Tour de France has always been good for me – the last two years I didn’t win but this year I won three stages and I’m happy for that. I always try to give my best and nearly got a fourth today. I started my sprint a little late today, but André did a good sprint and I’m happy for him to have won a stage too. Everybody’s happy. Now after the Tour de France I can go and relax a little bit, and I will then go for the mountain bike at the Olympics. It would be something special for me as I started in mountain bikes. That would be nice.”

For Rafal, triumphing through adversity through teamwork was one of the key features of the Tour for him. “After five years this is our last season as Tinkoff and we did our best, not only me but all the team – also fighting for Roman’s top ten and our jerseys, as well as three stage wins – it has been a great Tour de France. After our bad luck at the start of the Tour it was hard but we had a good talk with the Sport Directors and knew we had to fight for our other goals and we did.” 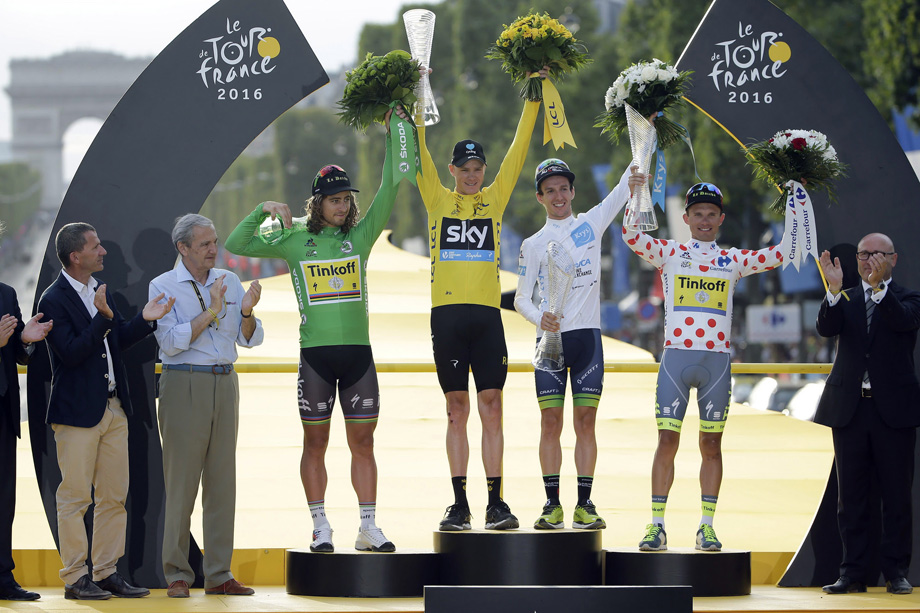 Peter Sagan and Rafal Majka on the final podium in Paris. Photo by Bettini Photo

Looking back on the Tour, Sport Director, Steven De Jongh, had every reason to be happy with the team’s strong performance. “Overall it was a good Tour. It was very unfortunate that we lost Alberto after two stages really, as after that he was not the same. All the boys did well though, especially Peter – he was showing himself as a true champion – yesterday he helped Roman to get into the top ten and before that he helped Rafa go in the decisive break for the polka dot jersey. He was an amazing team-mate.”

Overcoming set backs and disappointments in the early stages of the race, the team rallied together as one, changes its goals and setting about putting in the hard work to achieve these. A huge chapeau to everyone involved, from the riders to the Sport Directors, the mechanics to the Soigneurs and everyone else involved behind the scenes in making the show work.

All the Yellow of SIDI Sport. It’s Tour Number 13 in SIDI History