The news that the Union Cycliste Internationale (UCI) and organizer Amaury Sport Organisation (ASO) have pushed back the 2020 Tour de France for August 29 to September 20, may be welcomed by TV broadcasters and local businesses in the area through which the Tour’s course traverses. It’s even fair to say, by making the announcement, the Tour has inadvertently become a beacon of hope for cycling enthusiasts and sports fans in general. 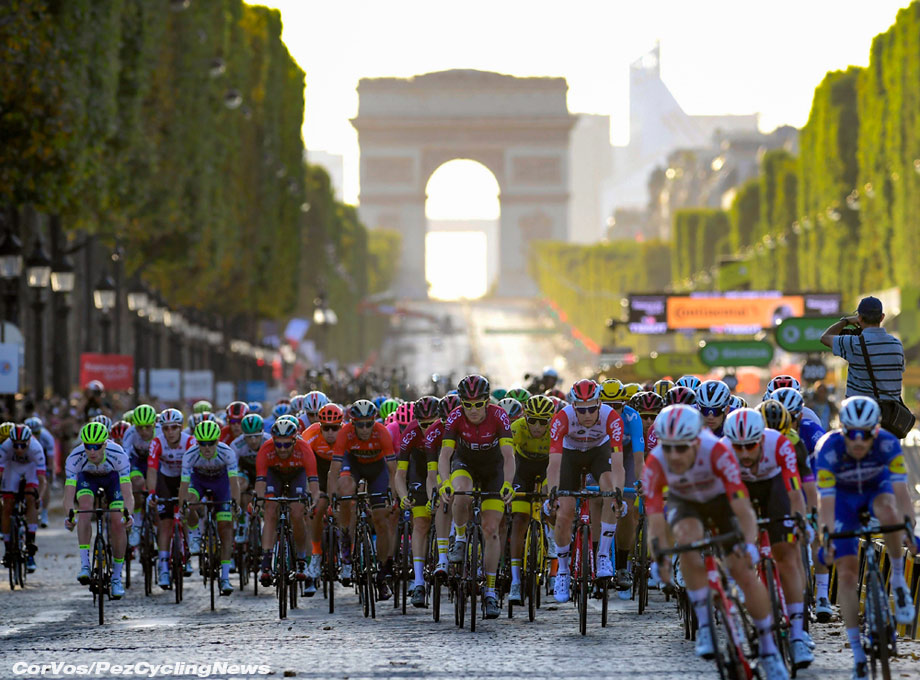 Memories of an incredible Le Tour 😍
We sure miss these moments, but we remain confident they will happen again this year, even if it means waiting for the month of September. pic.twitter.com/jODvor4o4C

Certainly, that was the intention in making the announcement. As the first major French sporting event to return to the forefront it’s being projected as an indication France is winning its war against the deadly, novel coronavirus outbreak.

Tour director Christian Prudhomme said as much when he appeared on the lunchtime news bulletin in France, Le Journal de 13 heures. “It’s the first big event planned, the beacon that allows us to look to the future and say, ‘yes, we’ll get through this,’ even if right now, everybody must fight,” Prudhomme said.

However, betting on the Tour de France actually going ahead this year is still a crap shot. Resting entirely on how the release of lockdown unfolds over the next few months in France (and elsewhere, for that matter), against the backdrop of the indiscernible coronavirus that caused all this havoc in the first place. And if the first few months of the unprecedented global pandemic are any indication, one could argue the odds are stacked well and truly against it.

In an otherwise bleak-looking French sporting calendar, which has seen many events slashed, including the most recent devastating cancellation of the 2019-2020 Ligue 1 and Ligue 2 season, the return of any sport is at utterly at odds with the severity of the current climate.

Nothing is certain in this public health crisis. The only certain thing is the uncertainty Thus, it could be equally fair to say, fans shouldn’t prematurely bet on the Tour’s return as yet. By that very same betting vein, before making any wagers on the 2020 Tour de France tournament, reviewing up-to-date information on where to put some action is highly recommended.

French Prime Minister Edouard Philippe made it clear in a speech to the National Assembly on Tuesday, April 28, that he couldn’t in good conscience sanction sport, even behind closed doors, during this extraordinary time. The moratorium on sport in France in his view should continue until September, due to the risk of a second outbreak of Covid-19.

French sports minister Roxana Maracineanu underlined that sentiment when speaking to France television a week later. She indicated there was extreme pressure and interest to have the prestigious cycling tournament go ahead even if it were to be in a closed-door situation. But she added she wasn’t sure it would given just how little is known about the deadly virus and how it will progress in the coming months.

“I hope it will take place but I am not sure. We do not know what the epidemic will be like after lockdown,” Roxana Maracineanu said.

The decision to salvage the Tour, one of the biggest sporting events of the year, came after the UCI and representatives of the race organizers and teams and riders held a video conference in mid-April.

The Tour isn’t the only major sporting event in France hoping to salvage its annual installment. The French Tennis Federation (FTF) recently came out with its intention to reschedule Roland Garros for September as well, floating possible dates such as September 20 or 27 as the start date of the two-week, clay-court Grand Slam event.

Just like with the Tour everything hinges on how France pulls itself out of lockdown this month and what happens in the interim before the government’s optimal month of September for the resumption of sport comes about.

Governments across Europe have laid down roadmaps for the gradual release of lockdown in the coming months. How best to eliminate confinement edits that are extolling untold devastation on economies and how to reconcile those with the equally pivotal objective to avoid a potentially more dangerous second wave of COVID-19 is a conundrum every government is grappling with, but none is the wiser.

Riding solo but bound by the passion for cycling ✨#CyclingUnited pic.twitter.com/p63sknDPJ8

Similarly, the UCI and ASO have a roadmap (if you will) for the 2020 Tour de France, a new date in September to look forward to possibly. Yet, when the only certain thing is uncertainty, it’s a wait and see game in the end.