Earlier today, 6 riders got away from the peloton after just 30km’s of racing. None of the riders were a threat to the overall classification and so they were allowed to get near on 5 minutes advantage. With a number of sprinters missing out during yesterday’s stage though, the chase to bring the escapees back for a sprint was inevitable.

The most active teams in the chase were Orica-Greenedge, Astana and Androni Giocattoli. Team MTN-Qhubeka p/b Samsung then also made its presence felt at the head of the race with 25km to go. Coming closer to the finish, the time gap gradually dropped before finally, the fugitives were caught with just 4km to go. After his fine 2nd place finish yesterday, Youcef Reguigui was looking forward to duelling it out in the mass sprint once again.

Guardini once again proved his strength and speed to take his 3rd victory in 4 days while Youcef also showed good consistency to be in the mix once again after another fine team performance. The Algerian fast man just missed the final step on the podium to take 4th on the day.

Nic Dougall – Rider
The plan today was to be attentive at the start and watch for any breaks containing guys who would be dangerous on GC and then to ride for Youcef at the finish. The break went according to plan with no really big teams in it. The chase was on in the last 40km’s and I went to the front with 25km’s to go to help bring it back together. The guys then put Youcef at the front of the race and he did really well to finish 4th in a big bunch finish. 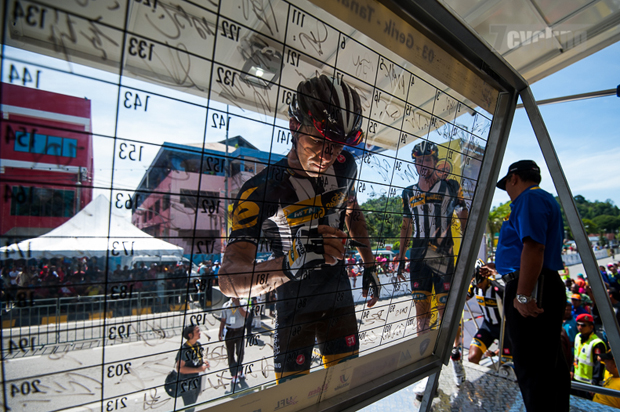