First GC victory of the year for MTN-Qhubeka p/b Samsung.

Youcef Reguigui has won the 20th edition of the Tour de Langkawi. The Team MTN-Qhubeka p/b Samsung rider was able to hold on to the yellow leaders jersey he donned after his emphatic stage victory yesterday.

Today’s final stage was all that stood in the way of MTN-Qhubeka p/b Samsung claiming its first general classification victory of the year. At just 96km in distance, the stage was a fast and furious affair with multiple attacks going off the front in the early stages. With 13 riders within a minute of Youcef’s leader’s jersey, Team MTN-Qhubeka p/b Samsung were on high alert and monitoring each and every attack carefully.

Eventually 4 riders were allowed to go clear. Rafaa Chtioui (Skydive Dubai), Bruno Pires (Tinkoff-Saxo), Leonardo Duque (Colombia) and Jonothan Clarke (United Healthcare) were the escapees. Duque was the most dangerous rider at only 51″ behind Youcef. After Daniel Teklehaimanot and Merhawi Kudus had to abandon the race with illness yesterday, the remaining 4 MTN-Qhubeka p/b Samsung went to the head of the race to control affairs.

The escape was held at a minute’s gap by our African team until the race hit the final finishing circuits where Team Astana and Orica-Greenedge then began to assist with the chase in order to set up the sprint. It was only with 2km to go though that the fugitives were caught.

In the dash to the line it was Andrea Guardini (Astana) who was once again the fastest. Caleb Ewan (Orica-Greenedge) was 2nd on the stage and Michael Kolar (Tinkoff-Saxo) rounded off the podium. Youcef was 10th in the final bunch sprint, ensuring the yellow jersey would not leave the Team MTN-Qhubeka p/b Samsung camp.

Youcef Reguigui – Rider
I was happy to keep the jersey today after a very hard race. I am so happy to get this victory, it is my first professional GC win and I am really just so, so happy right now. I know the team is very happy with the yellow jersey as well and I think this is our first yellow jersey of the year. I hope the team can win another at Tirreno-Adriatico. I want to thank Nic, Jacques, Natnael and also Daniel and Kudus who got sick yesterday. We all worked so hard this week and I must thank all of my team members for their work this week.

Michel Cornelisse – Rider
We only had 4 riders start this morning after Daniel and Merhawi fell ill yesterday. The other teams who were close to us on GC knew we might be vulnerable with fewer riders, so the start was fast with many attacks. There was a break of 6 that went clear (2 riders were soon dropped from break) and the biggest gap they got was 1’20”. It was a high pressure situation and the team worked really hard at the front of the race. For such a short race, it was one of the most difficult. After a very good team performance we kept the jersey.

Everybody is really happy as this is a major victory for our team, our sponsors and for the Qhubeka foundation. It is a 2.HC category event and you can see how prestigious this race is by the 200 000 spectators that are here at the stage finish. Our team deserved this win, we came here as the favourites and we always believed we could win. 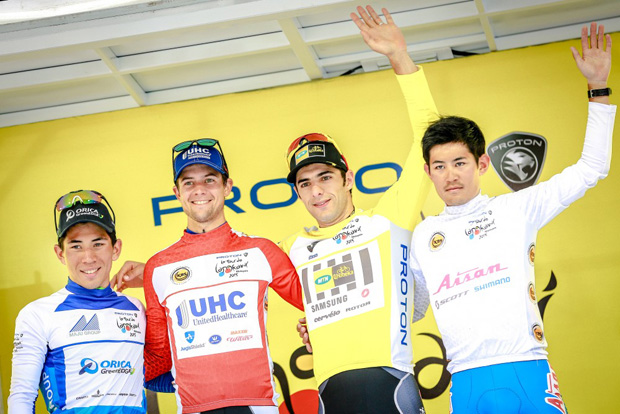