After seven stages and a total of 1238 km from Trentino to Poland, from Rovereto to Krakow, the final curtain has come down on the 70th edition of the Tour de Pologne.

It was 1238 km of terrific excitement, enhanced by the victories and the efforts of great riders with important names mixed in with the faces of young emerging talents that are starting to stand out in the peloton.

The thrills began right from the very first stage, with the young Diego Ulissi (Lampre-Merida), first over the finish line at Madonna di Campiglio to be the first rider to wear the yellow Skandia jersey. The second stage was a Domomite super stage with the arrival on top of the Passo Pordoi which gave the Tour de Pologne and extraordinary and unforgettable day with victory going to the Frenchman Christophe Riblon (Ag2r La Mondiale) and Poland’s own Rafal Majka (Saxo-Tinkoff) in the yellow jersey.

And the thrills kept coming, even when the group headed back to Poland. In the third stage At the finish line in Rzeszow the sprinters had their first chance to shine, and 2010 World Champion, Norwegian viking Thor Hushovd (BMC Racing) put everyone in their place. BMC Racing also figured as a major player at Katowice, where American Taylor Phinney busted a classic “finisseur” move to beat all the sprinters to the arrival, crossing the finish line all alone, arms raised in triumph.

Thor Hushovd was really back with a bang, choosing the roads of Poland to prove his return to top form, doubling down on his success in the fifth stage as well in Zakopane.

Zakopane also saw an astute Spaniard, Jon Izaguirre (Euskaltel) swipe the yellow jersey from Rafal Majka, leading the group towards the reigning stage at Bukowina Tatrzanska with a classification that was still uncertain and wide open, with ten riders ready to contend for victory.

The roller coaster circuit at Bukowina Tatrzanska lived up to everyone’s expectations, lighting up the race with a compelling finish punctuated with a splendid, two-man action by Darwin Atapuma (Colombia) who took the stage, and the winner of the Pordoi, Christophe Riblon, who came in second and captured the yellow jersey.

And the excitement didn’t stop there. In fact, to find out who would be the winner of the 70th Tour de Pologne we had to wait for the 37-km conclusive time trial stage in Krakow. It was a battle within the battle, with the TT specialists on one side who were jostling for the stage win with an arrival order worthy of a world cup race: first Bradley Wiggins, the king of the 2012 Tour who thus returned to victory in Poland, second Fabian Cancellara (Radioshack) and third Taylor Phinney (BMC Racing). On the other side of the battlefield were the big names in the classification, with Dutchman Pieter Weening (Orica Greenedge) who had held hard tenaciously on all the climbs day after day and who gave an extraordinary performance in the time trial to capture the yellow jersey and make it to the top of the podium in the 2013 Tour de Pologne.

General Directorof the Tour de Pologne Czeslaw Lang is also extremely pleased. “It was an extraordinary edition, from Trentino to Poland with a continuous succession of excitement and plot twists. Due to the routes ridden and the riders in the peloton, each stage featured an important winner: Ulissi, Riblon, Hushovd, Phinney, Wiggins and of course final winner Pieter Weening, and this makes us very proud. It’s just a shame that Rafal Majka didn’t make it to the podium, he deserved to; however congratulations to him, too, because he rode a great Tour de Pologne, as did the other Polish riders, particularly Marczynski, in the cyclamen jersey, and Huzarski in the red jersey. We couldn’t have asked for anything more, even from an organizational standpoint, everything went really well, proof of which was the fantastic presence of the crowds along the roads and the wide media coverage that the race and Poland enjoyed abroad.” 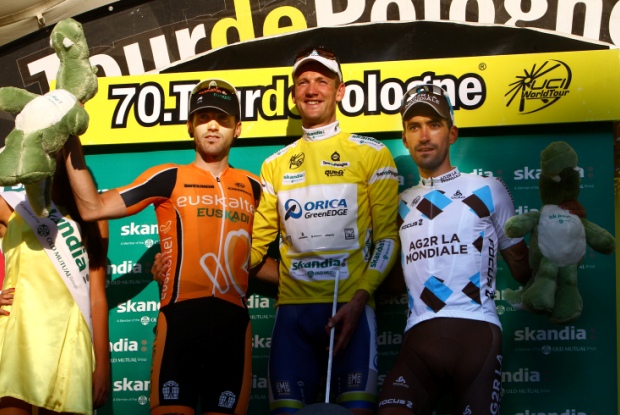 Alberto Contador, on top of the Mortirolo