An interview with the great Francesco Moser

“The Tour de Pologne is always welcome here in Trentino. The Pordoi awaits the challenge between me and my friend Czeslaw Lang.”

On Saturday, June 6th, the first edition of the Tour de Pologne Challenge Trentino will set off from Cavalese, in Val di Fiemme, and arrive on the passo Pordoi, in Val di Fassa. We’re talking about a great, all-new gran fondo event, initiated by the organizers of the Tour de Pologne, to commemorate the fantastic start of the Polish stage race in 2013 that got underway from the Dolomites, in Trentino.
To get a better idea of the spirit behind this event, we touched bases with Francesco Moser, a genuine Trentino treasure and a shining cycling legend. Francesco has always been great friends with Czeslaw Lang, the organizer for the Tour de Pologne. They were also team mates in the 80s.

With the Challenge Trentino gran fondo event the Tour de Pologne is paying a return visit to the Dolomites. What do you think of this initiative by the Lang Team?
“The Tour de Pologne took off from here in Trentino two years ago, for two stages in the Dolomites. One arrived in Madonna di Campiglio and the other on Pordoi. It was a fantastic event. Following in the wake of other Major Tours, the Tour de Pologne also opted for an out-of-state kick-off, and to do so it chose Trentino. Over the years Trentino has forged a strong partnership with the Tour de Pologne. I’m very happy that this year my friend Czeslaw Lang has decided to return here to Trentino. Although this time it’s for a race for cycling tourists, I’m sure that it will be a fantastic event that can appeal to two-wheel fans. Polish tourists have discovered the Dolomites and come here particularly in winter to ski. I hope that this initiative will contribute to enhancing the appeal of our territory among Poles even in summer, as a cycling and cycle touring destination.”

Challenge Trentino will feature the last part of the Dolomite super stage, as seen in the Tour de Pologne two years ago….
“Yes, that’s right. I think that this ride is the best way to commemorate the first time the Tour de Pologne came here to Trentino. I know that at the passo Pordoi, at the end of the race we will be inaugurating a plaque to celebrate that memorable day two years ago, which saw Christophe Riblon win the stage while the leader’s yellow jersey went to Rafal Majka. It’s going to require significant effort; it’s a gorgeous route but it’s also considerably challenging and physically demanding. But I am sure that the beauty of the Dolomites and the happiness of this day, which will be like a party, will make all the effort worthwhile. The first climb will be on the Alpe di Pampeago (Also here will be inaugurated a commemorative plaque of the Tour de Pologne 2013), an ascent that has written some of the most important chapters in the history of the Giro d’Italia. Then there will be a chance to catch your breath during a long descent. The second climb of the day will scale the passo Costalunga, not a difficult gradient to pedal, but one should not be underestimated. The grand finale on the Passo Pordoi is a slope that has been taken on more than a few times during the history of the Giro d’Italia. The passo Pordoi isn’t a climb, it’s a temple to cycling.”

Moser, what memories do you have of the Passo Pordoi?
“For me this ascent has a special meaning. In 1984 when I won the Giro d’Italia in the third-to-last stage, we covered the rounds of the 4 passes and right there on the Pordoi there was a fantastic duel between me and Laurent Fignon to capture the pink jersey. That day Fignon won the battle but in the end I was the one who triumphed in that Giro.
Anyway, the Pordoi will always be one of the symbolic climbs in cycling, a gorgeous uphill that demands respect. I’m anxiously awaiting my friend Czeslaw Lang and can’t wait to ride with him in the Challenge Trentino…it will be fun to see which one of us is in better shape!” 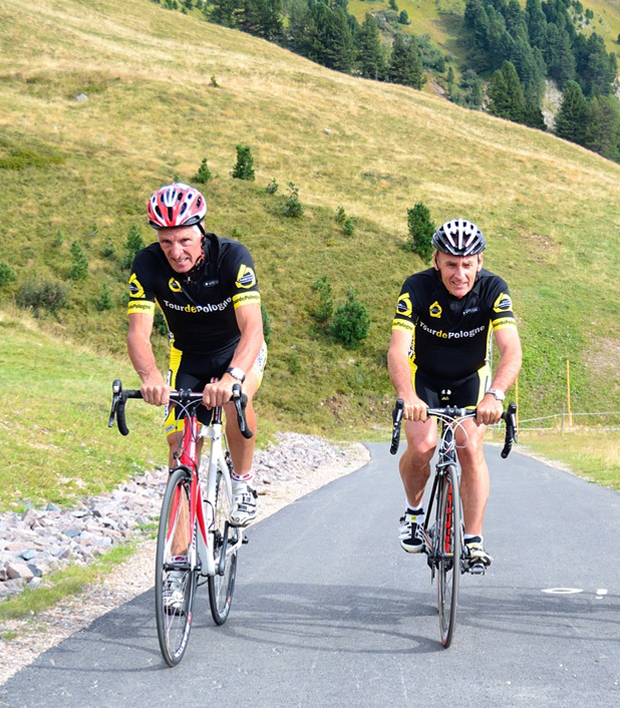 Champs-Elysees: 40 Years of Shows and Thrills

Launch of a new website and webshop at Vermarc Sport