Tour de Pologne Revisits the Finest Moments of the 2013 Edition

The Lang Team staff, lead as always by their General Director Czeslaw Lang, has been spending the last several weeks working on the 2014 Tour de Pologne. However, they still found the time to reminisce about the thrills experienced in the 2013 edition.

In fact, the fantastic 2013 edition saw the Polish stage race take off for the first time in its history from beyond its national borders, celebrating the important milestone of its 70th edition with a start off from Trentino, Italy, against the magical backdrop of the Dolomites, covering those climbs which have marked some of the most memorable moments in world cycling and which have now become a part of the legacy of the Tour de Pologne.

The “best moments” from the 2013 Tour de Pologne will be broadcast on Friday, November 15th at 11:00 a.m., from the TVP television studios in Warsaw. Every year this Polish channel beams images from the Tour de Pologne throughout Poland and around the world, and now it will also be broadcasting this event.

“We are already quite busy working on the next edition,” explains Czeslaw Lang. “But the 2013 Tour de Pologne was really extraordinary. We were extremely pleased with the whole experience, so it deserves to be revisited with this celebration that will include all of our partners and riders. Let’s not forget that their efforts are really what makes the race a success.”

In fact, in addition to all the sponsors and partners whose commitment and passion are essential to the success of the race, the program will feature the participation of several champions from the world of Polish cycling; highlights will include National Champion Michal Kwiatkowski, who was second in the 2012 Tour de Pologne and who had a fantastic 2013 season in which he stood out as a major player on the roads of the Tour de France and as the most active rider in the 2013 Tour de Pologne; Bartosz Huzarski, who enjoyed a remarkably long break at the World Cup in Florence and Rafal Majka, who this year at the Tour de Pologne had the honor and the satisfaction of wearing the yellow Skandia leader’s jersey in the Dolomite super-stage with arrival on Passo Pordoi, a jersey that he defended with guts and determination for many days. 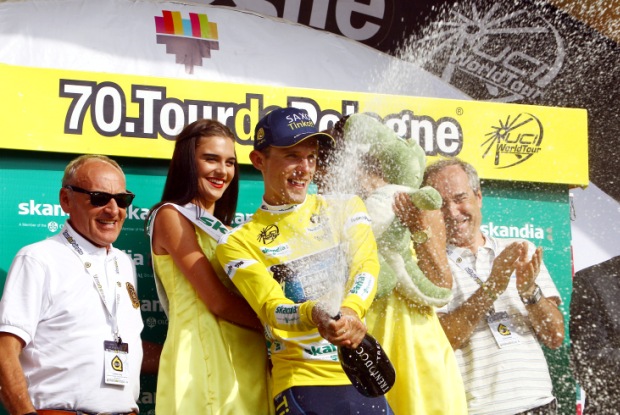 Photo of Rafal Majka in the yellow jersey on Passo Pordoi.